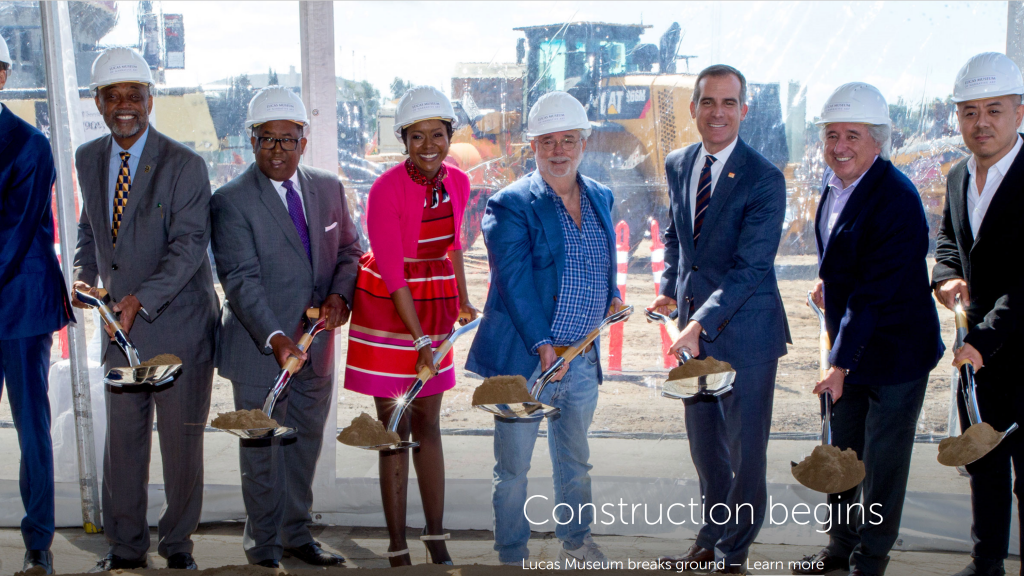 Filmmaker George Lucas and wife Mellody Hobson were at a groundbreaking Wednesday for the $1 billion museum. The museum will house works by painters such as Edgar Degas, Winslow Homer and Pierre-Auguste Renoir; illustrations, comic art and photography by artists such as Norman Rockwell, Maxfield Parrish and N.C. Wyeth; as well as storyboards, props and other items from popular films. It will be a “barrier-free museum” where “artificial divisions between `high’ art and `popular’ art are absent,” according to the museum’s website.

“It will be beautiful. It will be 11 acres of new parkland here,” Hobson said. “Everyone always wonders why we are doing so much to make this building stand out. George said, ‘I want an iconic building. I want a child to look at this building and say I want to see what is inside of that building.’ The building itself is a piece of art that will be in this park that we’re creating for this entire community and the world.”

The museum plans to feature a five-story building with 300,000 square feet of floor area for a cafe and restaurant, theaters, office space, lecture halls, a library, classrooms, exhibition space and landscaped open space.

Movies, including the “Star Wars” series, will be featured in exhibits showing what it takes to make a film, from set designs to character and costume sketches. There will be film storyboards and comic art. But the museum will also display paintings by Renoir, N.C. Wyeth, Winslow Homer, Maxfield Parrish and Norman Rockwell – all from Lucas’ private collection.

“Norman Rockwell can tell a whole story in one picture,” Lucas said.

“When were you captivated by Rockwell?” Blackstone asked.

Art that tells a story inspired him to tell stories. That narrative art is what Lucas will share in his museum.

The film (which had a very limited cinema release in the US and then a Netflix release internationally) is a different creature than the book. Events have been changed, plot elements removed, characters adjusted and the structure of the story altered. All of which seems to have been a good idea. The film carries the same sense of paranoia and wonder as the book and the same theme of people trying to cope when confronted with the incomprehensible. However, it has been remade into its own thing – a story with its own structure and characters that shares DNA with the book but which follows its own course.

Regular Editors Chris Garcia and James Bacon, joined by Will Frank, have set out to create an issue of Journey Planet dedicated to the legendary Star Wars Universe. The issue, set for a May 4th release, will look at the films, the universe, the fans, the books, the comics, the toys, the Irish Connection and the meaning of the greatest of all science fiction franchises!

We want to hear from you if you are interested in contributing. We have an instant fanzine and are soliciting pieces, from short pieces on the first time you saw the films, about your massive collection of Star Wars figures (Mint-on-Card, of course)

We already have a beautiful cover by Sarah Wilkinson.

And may the Force be with you!

(4) HAL/ALEXA. So how is this invention supposed to parallel the workings of HAL-9000 – by preventing people from getting back into their homes? The Verge tells us “This replica of HAL-9000 from 2001: A Space Odyssey comes with Amazon’s Alexa built in”.

HAL-9000, the malevolent supercomputer at the heart of Stanley Kubrick’s classic 2001: A Space Odyssey, is an icon of science fiction cinema. So much so, that if you ask any one of the virtual assistants to “Open the pod bay doors,” they’ll dutifully parrot HAL’s lines from the movie back at you. Now, Master Replicas Group wants to take that step a bit further, turning HAL into a virtual assistant that can control your home.

The company name might be familiar to prop and costume fans: the original Master Replicas produced a range of high-quality props from franchises like Star Wars and Star Trek before going out of business a decade ago. If you’ve seen someone swinging around a lightsaber, there’s a good chance it’s one of Master Replicas’ props, or based off of their models. The new company is made up of several former employees, who are getting back into the prop replica business with a new range of products, including an interactive replica of HAL.

This isn’t the first time that someone’s thought about putting HAL into your home’s smart devices: a couple of years ago, fan prop-maker GoldenArmor made its own version that allows someone to mount it over their Nest thermostat. MRG’s prop goes a bit beyond that. It recently obtained the license from Warner Bros. to create an exact replica of the iconic computer, and while most prop replicas are static recreations of a movie or film prop, this version is designed to be interactive, using Amazon’s smart assistant, Alexa.

A humorous video simulating “If HAL9000 was Amazon.com’s Alexa” has already gone viral —

(6) IS IT VINTAGE? Mark Kelly considers the sequel to Dandelion Wine in “Ray Bradbury: FAREWELL SUMMER”.

RB provides an afterword to this book, also, in which he explains where this book came from. In the mid 1950s (several years after the successes of THE MARTIAN CHRONICLES and THE ILLUSTRATED MAN)  he submitted a manuscript to his publisher, Doubleday, for the book that became DW. But that original manuscript was too long and his editor suggested cutting it. RB quotes his reply (p210 in FS): “ ‘Why don’t we published the first 90,000 words as a novel and keep the second part for some future year when you feel it is ready to be published.’ At the time, I called the full, primitive version The Blue Remembered Hills. The original title for what would become Dandelion Wine was Summer, Morning, Summer Night. Even all those years ago, I had a title ready for this unborn book: Farewell Summer.”

With DANDELION WINE such an entrenched classic, it’s difficult to imagine how the content of FAREWELL SUMMER could have been incorporated into it. That would have been a completely different book. As it came to be, DW has a perfect story arc, across one summer in the life of a 12-year-old. Yet even as a leftover, on its own, FS is a quite different, a rather oddly amazing and moving, book.

(7) WHEATON MEETS SHATNER. In this video, Wil Wheaton acts out meeting William Bleeping Shatner when ST:TNG was in its second season.

The filming of Star Trek 5 happened only a few doors away from Star Trek The Next Generation, Giving Wil Wheaton (Wesley Crusher) the chance to meet his idol William Shatner, it didn’t go as well as he had hoped…

(8) LAST-MINUTE CAMPAIGNING. We’re annually snowed under by award eligibility posts, but it’s strange to see them still arriving with less than 24 hours left to nominate, when voters no longer have time to read/listen to the person’s recommended body of work.

Every Monday morning*, since June of 2011, I’ve put out a blog post featuring authors and their most memorable meals. That’s more than 350 stories of incredible food, amazing dinning companions, astonishing circumstances, and remarkable settings.

And Crystal Huff points to a year’s worth of tweets:

Right! Multiple people have pinged me about my eligibility for the #HugoAwards Fan Writing category. One friend even put together a list of tweets to show me I had, in fact, done a fair bit of writing for #fandom in 2017. So here comes… a thread of threads! pic.twitter.com/c59bevafmJ

Neil Young recently sat down with Rolling Stone’s Patrick Doyle to discuss his role in the upcoming film Paradox. In the midst of the interview, he opened up about the sci-fi novel he’s been writing. It’s called Canary, and Young said it focused on a power company employee who gets caught exposing the corruption at his workplace. “He discovers the solar company he works for is a hoax,” he explained. “And they’re not really using solar. They’re using this shit—the guy who’s doing this has come up with a way to make bad fuel, the bad energy, this really ugly terrible stuff, and he’s figured out a way to genetically create these animals that shit that gives the energy to make the [fuel]. So he’s created this new species. But the species escapes. So it’s a fuckin’ mess. It’s a long story.”

Young said he already has a New York agent on board with the project, but didn’t share a possible publication date. He also got candid when it came to the topic of retirement tours. “When I retire, people will know, because I’ll be dead,” he said. “I’m not gonna say, ‘I’m not coming back.’ What kind of bullshit is that? I could go out and play if I felt like it, but I don’t feel like it.”

This is disgraceful by another mob running a convention treating a veteran author like this. These cons need to stop policing author speech and get back to celebrating SF/F! #WeAreAllShetterly #FreeWill https://t.co/NAEg55lnLe

(11) YO HO NO. Fraser Sherman is teed off: “Books are too expensive, so it’s okay to pirate them. Oh, really?”

I have no sympathy for this crap. In the many years I did the struggling-writer shtick, I saw lots of books I couldn’t afford. I didn’t steal copies. I wouldn’t do it if I were still struggling. If it was a paper copy, would they shoplift it from Barnes & Noble if they thought it was overpriced? Or how about a restaurant — if the service takes too long (the “they don’t release it fast enough” argument), does that mean they’re entitled to steal food from the salad bar? Soft drinks cost a fraction of what they sell for, does that make it okay to steal them? Or movie tickets — lord knows those are outrageously priced, but does that justify sneaking in without paying? 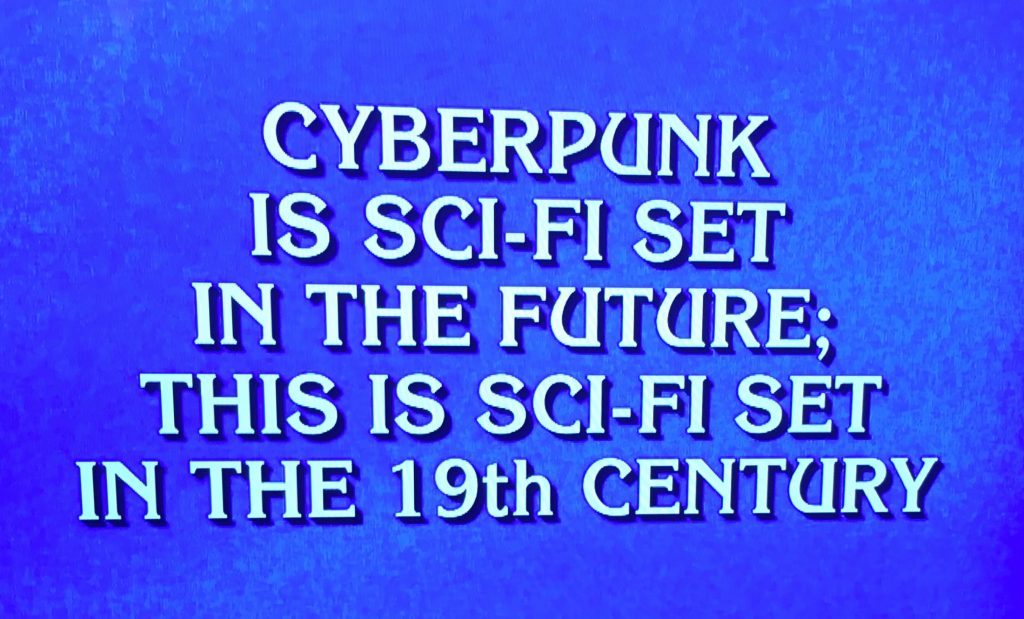 A contestant got it right.

(13) GOT OBSIDIAN? “Changing environment influenced human evolution”: a site in Kenya is “the earliest known example of such long distance [25-95km] transport, and possibly of trade.”

Early humans were in the area for about 700,000 years, making large hand axes from nearby stone, explained Dr Potts.

“[Technologically], things changed very slowly, if at all, over hundreds of thousands of years,” he said.

A period of tectonic upheaval and erratic climate conditions swept across the region, and there is a 180,000 year interruption in the geological record due to erosion.

It was not only the landscape that altered, but also the plant and animal life in the region – transforming the resources available to our early ancestors….

Police in California said two men were arrested on burglary charges after a man discovered his $1.4 million collection of Marvel super hero memorabilia for sale online.

The San Bernardino County Sheriff’s Office said the Rancho Cucamonga Police Department responded Feb. 22 to a storage facility where a man discovered his collection of Marvel collectibles had been stolen after he was made aware that some of his items were listed for sale online.

‘Billions’ star Paul Giamatti gets some gifts or reading assignments from Stephen, depending on how you look at them.