(1) LA VINTAGE PAPERBACK SHOW. John King Tarpinian snapped a photo of the full house at today’s event. I staffed the Loscon table for a couple of hours, then unfortunately need to retreat home and nurse a bad back. 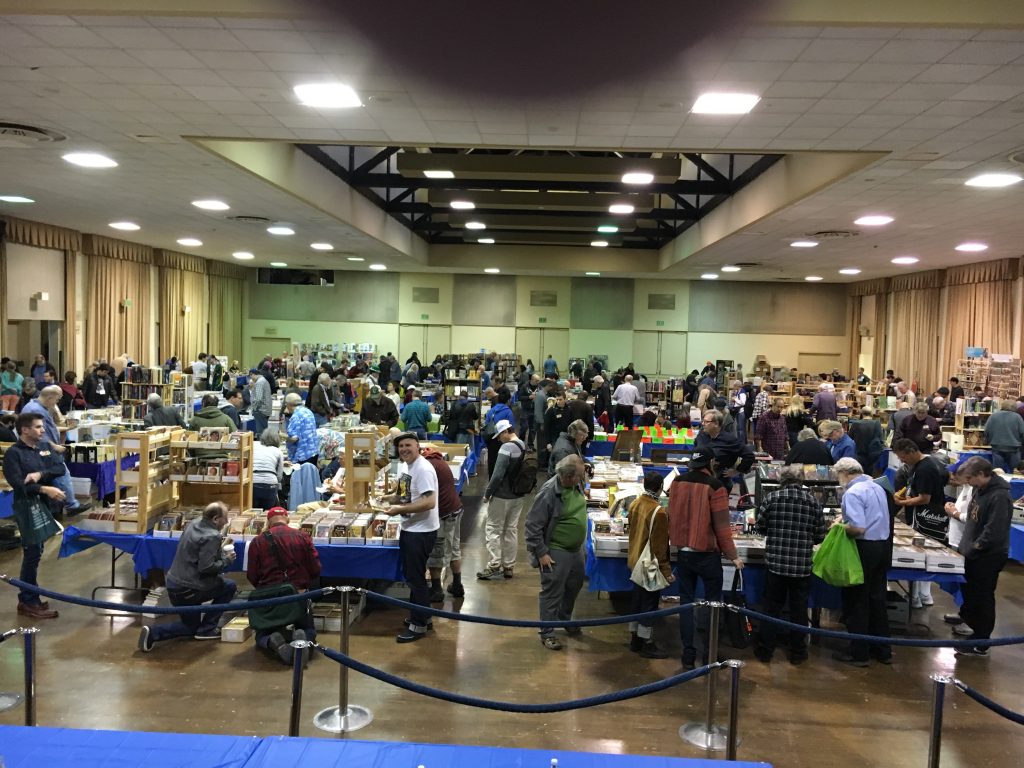 (2) CITY BEAT. Adam Whitehead attended a preview of the first episode of The City and the City, the BBC adaptation of China Miéville’s 2009 novel.

The first ten minutes or so are a bit rough, especially for readers of the novel who may be surprised by how incredibly faithful it is to the novel one moment and how it goes off on its own tangent the next: there are major additions to the cast of characters and story. This makes sense: the episode was longer than the standard hour (I didn’t get the exact runtime but it seemed to be around 65-70 minutes) and there are four of them, which means the TV show is in the unusual position of having more time to tell the story than the relatively short novel has (which barely scrapes 300 pages). The new material is, for the most part, well-judged and intelligently deployed. Giving Tyador a wife seemed an unnecessary change, but by having her vanish in a suspected act of Breach immediately personalises the strange situation in the city: rather than the split (and Breach) being remote forces Tyador is aware of, they are instead deeply personal affronts that frustrate him. It gives the premise an immediacy not present in the novel but which works wonderfully on screen.

(3) WEIRD TONGUE. Aeon explains why “English is not normal” – “No, English isn’t uniquely vibrant or mighty or adaptable. But it really is weirder than pretty much every other language.”

…Finally, as if all this wasn’t enough, English got hit by a firehose spray of words from yet more languages. After the Norse came the French. The Normans – descended from the same Vikings, as it happens – conquered England, ruled for several centuries and, before long, English had picked up 10,000 new words. Then, starting in the 16th century, educated Anglophones developed a sense of English as a vehicle of sophisticated writing, and so it became fashionable to cherry-pick words from Latin to lend the language a more elevated tone.

It was thanks to this influx from French and Latin (it’s often hard to tell which was the original source of a given word) that English acquired the likes of crucified, fundamental, definition and conclusion. These words feel sufficiently English to us today, but when they were new, many persons of letters in the 1500s (and beyond) considered them irritatingly pretentious and intrusive, as indeed they would have found the phrase ‘irritatingly pretentious and intrusive’. (Think of how French pedants today turn up their noses at the flood of English words into their language.) There were even writerly sorts who proposed native English replacements for those lofty Latinates, and it’s hard not to yearn for some of these: in place of crucified, fundamental, definition and conclusion, how about crossed, groundwrought, saywhat, and endsay?

(4) FIND AND FLAG. In March, Rocket Stack Rank reviewed 65 stories from 10 magazines, of which 20 are free online, 2 are translations, and 13 by new writers. Greg Hullender also reminds readers about the blog’s new features:

Our March 2018 Ratings Page uses our new UI, which allows readers to rearrange the data to taste. For example, it’s easy to display stories grouped by:

The highlights can be toggled independently of grouping, of course.

Stories can also be flagged and rated by fans to indicate things like:

The results of all the flagging show up on the My Ratings page, which is useful to manage your reading during the year and for award nominations at the end of the year.

We also updated the January 2018 and February 2018 Monthly Rating pages to use the new format, so people who want to maintain a complete list for 2018 can do so. The red highlights in these two lists indicate stories that were recommended by anyone, not just RSR. The March list will get those highlights on April 1.

(5) HALDEMAN. At The Archive, “Author Joe Haldeman on How the Vietnam War Gave Him Something to Write About”.

…From the settled and perhaps rueful perch of a septuagenarian writer, looking back a half-century into the very unsettled sixties, a couple of questions do now beg to be answered:

Would you have been a writer without the experience of Vietnam? What else might you have done?

I think I would have been a writer of some sort, since I’d started scribbling stories and cartoons and poems when I was about ten. I had no encouragement except from my mother, but she liked them well enough to bind them into little books with her sewing machine. (They would be around now as embarrassing juvenilia, but my father, a neatness freak, found them and burned them.)

But the long habit of writing, to paraphrase a title I would later use, was well entrenched long before I was drafted and sent off to save America from the Communist Menace. I didn’t think of it at the time, but without the war I wouldn’t have much to write about: it gave me a consistent subject and point of view for one remembered year—and the timeless theme of one man’s survival in a hostile universe….

(6) THE IMMIGRANT’S PLIGHT. Erin Horáková has a fine review of “Paddington 2” at Strange Horizons.

…Perhaps to immigrate is not what it once was, because the nature of our struggles has changed—though “immigration” means many things, and for many contemporary refugees the process is so awful and fraught as to defy any such ameliorating comparison. Old sins have new names, and all that’s “post” is prologue. Yet in a vital way to be an immigrant, to live as an immigrant, is already to have succeeded against great odds. It is to have made a voyage, and to make it again every day in miniature. To feel they journey’s echoes in your bones, even ten years on, when you raise children in a new land. Always. Even when you “belong.”

This opening sequence shows us Paddington’s life as a success, as a blessing, as a source of pride for himself and those who love him. Silly, fallible, mess-making Paddington, who is good in small things, and through this great in goodness. The film makes several nods to the amusing misunderstandings and clumsy mishaps of Michael Bond’s Paddington series. I slightly feel that the way the films merely tip the hat to this aspect of the source material before moving on is due to the late-capitalist cult of productivity and achievement. Even in comic children’s fiction, messing up, not Being Useful in some work-like capacity, feels too cringey, too high stakes. I myself have an awful fear of failure and embarrassment, and so wince through the Amelia Bedelia-ish incidents when reading the books. Yet the films’ redirection of emphasis does serve an important narrative purpose: it enables Paddington escape being a stupid immigrant caricature, allowing him both difference and dignity, both failure and worthiness of love. When Paddington’s whimsical approach to his window-cleaning business succeeds after some false starts, we have our cake and eat it. I ultimately feel the film is performing a good update of the series. The movie’s doing its own thing, minimising one aspect of the books’ formula to focus on its own projects….

(7) MISTER ROGERS FOREVER. CNN says “Mister Rogers is coming to a post office near you”.

The stamp is set for release on March 23 and will be introduced through a free dedication ceremony at WQED’s Fred Rogers Studio in Pittsburgh, which will be open to the public.

It spotlights the cherished children’s television star along with one of his show’s prominent puppets, King Friday.

(8) THE MONEY KEEPS ROLLING IN. (Wait, that was Evita…) The Washington Post’s Peter Marks, in “Fans of the books will love Broadway’s Harry Potter — but will others?”,  discusses how Harry Potter and the Cursed Child is coming to Broadway with seven members of the London cast and how competitors have put off mounting other plays on Broadway because they know Harry Potter will crush the competition.  (Tickets for both parts of Cursed Child currently sell for $1,217 on Ticketmaster.)

Marks also visits the Harry Potter Shop in London and finds it loaded with goodies, including a personalized letter of admission to Hogwarts for 15 pounds.

In King’s Cross railway station, at the approximate location of Platform 9¾ , there bustles a small commercial temple of the multibillion-dollar Harry Potter kingdom. Within the well-stocked walls of the Harry Potter Shop, you can conduct a merchandise sweep the likes of which might cause even He-Who-Must-Not-Be-Named to collapse in swooning contemplation of licensing checks yet to be cashed.

Between $80bn (£57bn) and $200bn of cash generated by cyber-crime is laundered every year, said Dr McGuire drawing on a study by US analyst firm Rand released in early 2018.

A significant chunk of that cash is piped through various crypto-currencies and digital payment systems in a bid to hide its origins, said Dr McGuire, who carried out the research for security firm Bromium. The study sought to understand the wide range of methods that cyber-crime gangs used to clean up cash they extract from individuals and businesses.

(10) HOW TO EXPLORE THE FUTURE. The “Imagining the History of the Future: Unsettling Scientific Stories” conference takes place March 27-29 at Ron Cooke Hub, University of York, UK:

The future just isn’t what it used to be… not least because people keep changing it. Recent years have seen a significant growth of academic and public interest in the role of the sciences in creating and sustaining both imagined and enacted futures. Technological innovations and emergent theoretical paradigms gel and jolt against abiding ecological, social, medical or economic concerns: researchers, novelists, cartoonists, civil servants, business leaders and politicians assess and estimate the costs of planning for or mitigating likely consequences. The trouble is that thinking about the future is a matter of perspective: where you decide to stand constrains what you can see

With confirmed plenary speakers Professor Sherryl Vint (University of California, Riverside, USA) and Professor Charlotte Sleigh (University of Kent, UK) this three-day conference will bring together scholars, practitioners, and activists to explore ways in which different visions of the future and its history can be brought into productive dialogue.

(11) BRING YOUR OWN PLUTONIUM. O’Reilly Auto Parts carries a listing for a Flux Capacitor.

Detailed Description
Time Travel at your own RISK!!!