(1) UP ON THE ROOFTOP. Not the sort of thing you usually find on a New York rooftop, like a pigeon coop, or Spider-Man — “The Met Rooftop’s New Installation, ‘We Come in Peace,’ Has Landed”. 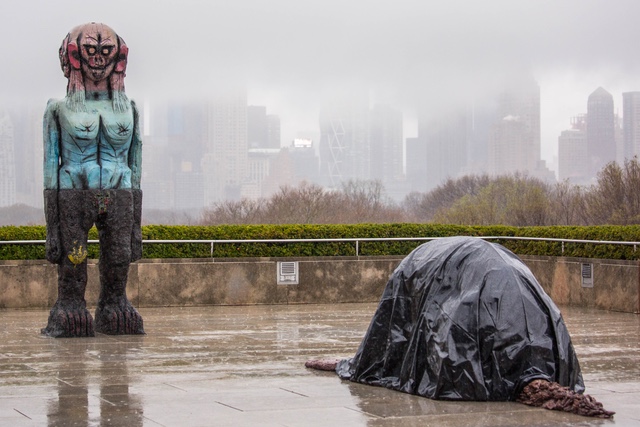 The Metropolitan Museum of Art’s Roof Garden is now officially open for the season (along with its bar!), and this year’s site-specific commission is a powerful pair of imposing sculptures by Pakistani artist Huma Bhabha. Titled We Come In Peace (a phrase lifted from the 1951 sci-fi film The Day the Earth Stood Still), the work conjures up an ominous but open-ended narrative, inviting visitors to explore their own thematic interpretations: subjugation and supplication, respect, fear, and/or adoration; social upheaval and displacement; gender, power, and “memories of place.”

Bhabha forged the two pieces in her Poughkeepsie studio from ephemera and construction materials (cork, Styrofoam, plastic) which she then cast in bronze….

(2) TOUGH JOB. Laura “Tegan” Gjovaag, in “Conventions and problematic people” at Bloggity-Blog-Blog, reviews the latest news about ConCarolinas and Worldcon and concludes:

It’s enough to make a person swear off conventions. Certainly enough to make being on a concom a dangerous and scary job. I admit I admire those members of fandom who volunteer their time for such a thankless task even more after learning about these various problems.

(3) TOUGHER JOB. Naomi Kritzer and Alex Acks share their thoughts about panel moderation in two separate threads. Jump in by clicking on these tweets:

For a while, my big local con did not routinely assign moderators, so I literally prepared to moderate every single panel I was assigned to. (I'd cede if someone else also showed up prepared.)

A convention is a place of work for me. And you can bet your ass that I’m not going to put up with behavior on a panel that I wouldn’t put up with at a meeting.

I really liked the thought process Nick talked about in his Reading List piece, and how the books he’s chosen are intended to serve as a cross section of SF as it currently stands. That helped crystallize my thinking on the subject, as did dispatching my duties as a Kitschies judge this week.

That was a really fun job, and one that contained substantially more hope than a lot of people tend to see in genre fiction. Both short lists were crammed full of books that had unique voices, did unique things and drove the field, and the conversation around it, forward. It also helped me give a very clear shape to the sort of things I’m looking for in the initial Shadow Clarke read. And that shape is a compass.

I’ve got a working familiarity with a lot of these books following the Kitschies and, if I wanted to, I could focus entirely on that. But what really excites me about this list is the opportunity it presents to push outside my boundaries. In addition, given how much I often rail against SF culture’s tendency to enthusiastically face backwards on the rocket, it would be completely remiss of me to just hug some books I already know a little bit tighter.

So, that’s my critical North in this situation. My critical South is to not overlook books that deserve to be talked about. Sometimes those will come from big names. Chances are, more likely, they’ll come from newcomers.

(5) TRUTH IN DANGER. At the hands of Dangerous’ ace reporter Jon Del Arroz, John Ringo’s decision not to go to ConCarolinas now becomes a “ban,” and people’s threats not to show up are transmogrified to threats of violence — “Author John Ringo Responds to SJW Assault That Led to Sci-Fi Convention Ban” [Internet Archive link.]

ConCarolinas initially didn’t respond to the nasty trolling and threats of boycotts, but after deliberating over the weekend, they sent Ringo an email disinviting him from the convention because, as the convention chair said on Twitter, “the con could not guarantee Ringo wouldn’t be walking into a hostile environment. John wanted to have fun. A reasonable request. The con could not guarantee that he wouldn’t be subject to people being ugly to him.”

Ringo recalls the interchange with the convention to be a bit more serious, stating he was asked not to attend because, “we were going to have to hire full time security guards and maybe off-duty police during peak hours.”

If the crowd is prone to be as violent as he suggests, and it has gotten increasingly worse over these last few years, why won’t the conventions do something to protect their conservative guests?

Allegedly I am a badass international villain. https://t.co/qYog83zz0K

(7) ON THE AIR. NPR reports that in Ann Arbor a bookstore’s public typewriter is the town conscience. And repository of fart jokes. “‘Notes From A Public Typewriter’ Muse On Everything From Cats To Commencement”

When it’s closing time at Literati Bookstore in Ann Arbor, Michigan, co-owner Michael Gustafson runs through a checklist that, for the most part, is pretty routine. First, make sure all the customers have gone, lock the doors and take out the garbage and the recycling. Shelve any stray books, adjust the tables, turn off the music.

Then, after closing out the registers, Gustafson descends one last time to the store’s lower level, the part of the bookstore stuffed with volumes on cooking and gardening, travel and history. And he sits down at an old typewriter to read the notes the day’s customers have left behind.

On busy days, there are dozens and dozens of them….

(8) TRASH MASTERS. Here’s the next job robots are taking over, and it probably won’t be much of a struggle: “How robots are reshaping one of the dirtiest, most dangerous jobs”.

Sorting trash is a dirty, dull, and dangerous job. Recycling workers are more than twice as likely as other workers to be injured on the job, and stubbornly high fatality rates make refuse and recyclable material collection one of the nation’s most dangerous occupations.

But with the rise of artificial intelligence, sophisticated trash-sorting robots are now turning up at recycling plants across the nation. Guided by cameras and computer systems trained to recognize specific objects, the robots’ arms glide over moving conveyor belts until they reach their target. Suction cups or oversized tongs attached to the arms snag cans, glass, plastic containers, and other recyclable items out of the rubbish and flick them into nearby bins.

(9) CANON FIRE. Ethan Alter, in the Yahoo! Entertainment story “How ‘Solo’ rolls dice on a key piece of ‘Star Wars’ history”, says that in Solo the game of sabacc that Han Solo used to win the Millennium Falcon has been clarified. A.C. Crispin in her novel Rebel Dawn declared sabacc to be a dice game, but her novel has been ruled non-canonical and the official tie-in version of sabacc is a combination of dice and cards.

That would be the moment that flyboy Han Solo (played by Alden Ehrenreich) wins his beloved “bucket of bolts,” the Millennium Falcon, away from its previous owner, Lando Calrissian (Donald Glover). Their face-off occurs during a climactic round of sabacc, the card game enjoyed by galactic citizens residing on every planet from Apatros to Yavin. And based on this Solo teaser, Han is quite clearly the underdog, while Lando is the top dog; in a hilarious moment, Solo reveals his cards to his sidekick, Chewbacca, and the Wookiee lets out a classic moan that doesn’t require any translation. (But allow us to translate anyway: “You’re screwed.”)

The sabacc sequence won’t just be Solo‘s answer to Casino Royale‘s classic poker game, though. It’s also going to firmly establish how the Millennium Falcon changed hands, a story that has gone through several permutations over the decades. It all started in The Empire Strikes Back, when Han (played by Harrison Ford) showed up in Cloud City and Lando (Billy Dee Williams) ribbed him over the Falcon’s poor shape. “What have you done to my ship?” he asked, to which Han protested: “Your ship? Hey, remember, you lost her to me fair and square.”

(10) BIG BLABBERS. Looper will see to it that the “Untold Truth of the Hulk” is untold no longer!!

The Incredible Hulk is one of Marvel’s oldest and most recognizable icons. Created by comics legends Stan Lee and Jack Kirby and first appearing in 1962’s Incredible Hulk #1, the Green Goliath spawned hundreds of comics, two live-action movies, a popular live-action TV show, and multiple animated series, films, and video games. And most importantly — big foam hands that make smashy sounds when you hit things with them. With so much Hulk over so much media, it’s almost impossible for even the most hardcore fans to keep up with all of the stories. Here’s the untold truth of the Incredible Hulk…