(1) LOOK OUT BELOW. To avoid the chance that the Cassini probe might crash into and contaminate a moon of Saturn, NASA plans to crash it into the planet.

“Cassini’s own discoveries were its demise,” said Earl Maize, an engineer at NASA’s Jet Propulsion Laboratory (JPL) who manages the Cassini mission.

Maize was referring to a warm, saltwater ocean that Cassini found hiding beneath the icy crust of Enceladus, a large moon of Saturn that spews water into space. NASA’s probe flew through these curtain-like jets of vapor and ice in October 2015, “tasted” the material, and indirectly discovered the subsurface ocean’s composition — and it’s one that may support alien life.

“We cannot risk an inadvertent contact with that pristine body,” Maize said. “Cassini has got to be put safely away. And since we wanted to stay at Saturn, the only choice was to destroy it in some controlled fashion.”

(2) ON THE AIR. Hear Hugo nominees Amal El-Mohtar and Max Gladstone on Ottawa radio program All in a Day.

Earlier this week, Splendor & Misery—the sophomore album by experimental L.A. rap group clipping.—was nominated for a Hugo Award for Best Dramatic Presentation, Short Form. The Hugo is the highest prize in science fiction/fantasy, granted annually to the genres’ best literature, cinema, television, comics, and visual art. But the awards have never been particularly receptive to music. The last time a musical album was recognized by the Hugos was 1971, when Paul Kantner’s Blows Against the Empire was nominated. The Jefferson Airplane guitarist’s solo debut grandly envisioned a countercultural exodus to outer space, helping set the stage for many more sci-fi concept albums to come, starting with prog-rock’s explosion.

The storyline that winds through Splendor & Misery is just as political as Kantner’s. Set in a dystopian future, the LP revolves around a mutineer among a starship’s slave population, who falls in love with the ship’s computer. This Afrofuturist narrative, as rapped by Daveed Diggs, is matched by a dissonant yet sympathetic soundscape from producers William Hutson and Jonathan Snipes—one that evokes the isolation and complicated passion of the premise. Visually, this arc is represented in Hutson’s cover art: a spaceman with his pressure suit in tatters, revealing bare feet. “It’s a reference to how runaway slaves have been depicted in the U.S. in newspaper announcements and paintings like Jacob Lawrence’s Migration Series,” Hutson says.

Diggs is no stranger to awards, having snagged both a Grammy and a Tony for his role in Hamilton, but clipping.’s Hugo nomination is just as profound….

(4) THE ROAD TO HELSINKI. Camestros Felapton begins his review of the nominees with “Hugo 2017: Fanwriter”.

Chunk one: established fan writers: Mike Glyer, Natalie Luhrs, Foz Meadows and Abigail Nussbaum. Chunk two: Jeffro Johnson, the Rabid nominee but one with a track record of informed fan writing on genre issues. Chunk three: the inimitable Dr Tingle. The discussion below is in no particular order.

(5) SF INFILTRATES LIT AWARD. China Miéville’s This Census-Taker is one of eight finalists for the Rathbones Folio Prize, given “to celebrate the best literature of our time, regardless of form.” All books considered for the prize are nominated by the Folio Academy, an international group of esteemed writers and critics. The three judges for the 2017 prize are Ahdaf Soueif (chair), Lucy Hughes-Hallett and Rachel Holmes. The winner will be announced on May 24 at a ceremony at the British Library.

(6) CHAIRMAN OF THE BOARD. Filer and board game designer Peer Sylvester has been interviewed by Multiverse.

Q:  THE LOST EXPEDITION comes out this year. What can you tell our readers about this board game (without giving too much away?)

PS: Percy Fawcett was arguably the most famous adventurer of his time. In 1925 he set into the Brazilian rainforest with his son and a friend to find El Dorado (which he called “Z”), never to return again. Speculations of his fate were printed in newspapers for years with a movie coming out this year as well.

The players follow his footsteps into the jungle. It’s a cooperative game (you can play two-players head-to-head as well) where you have to manage all the dangers of the jungle and hopefully come back alive. It has a quite unique mechanism that prevents “quarterbacking”, i.e. players dominating everyone else. The game features beautiful art by Garen Ewing.  It will be, without doubt, my prettiest game so far. It has a Choose-Your-Own-Adventure-Book vibe. But, unlike those books, different dangers come out at different times, so every decision is unique.

(7) GET YOUR KITSCH ON. Submissions for The Kitschies awards have opened and will continue until November 1. File 770 wrote a summary piece about the awards last month.

cant believe that even after last year voxman and bad dogs blues forgot to buy https://t.co/d8mR544g7w guess it is anti-devilman site now

Like last year, the DEVILS were so excited about being DEVILS that they forgot to register important website names of their scoundrel ways. This year they are playing scoundrel pranks again, but now instead of learning about common devilman topics like having a lonesome way or crying about ethics in basement dwelling, this site can be used to PROVE LOVE by helping all with identification of a REVERSE TWIN! …

THE POWER IS YOURS

Never forget, the most powerful way to stop devils and scoundrels in this timeline is to PROVE LOVE EVERY DAY. Use this as a reminder and prove love in some small way in your daily life. Pick up the phone and call your family or friends just to tell them you care about them and that they mean so much to you. Help pick up some trash around your neighborhood. Let someone go ahead of you in line. As REVERSE TWINS pour in from other timelines, we can do our part to make this timeline FULL OF LOVE FOR ALL, and the power to do that is in your hands with every choice that you make! YOU ARE SO POWERFUL AND IMPORTANT, AND YOU ARE THE BEST IN THE WHOLE WORLD AT BEING YOU! USE THIS POWER TO MAKE LOVE REAL!

(11) CELEBRITY VISITS JIMMY OLSEN. Don Rickles,who passed away yesterday, and his doppelganger once appeared in comics with Superman’s Pal. 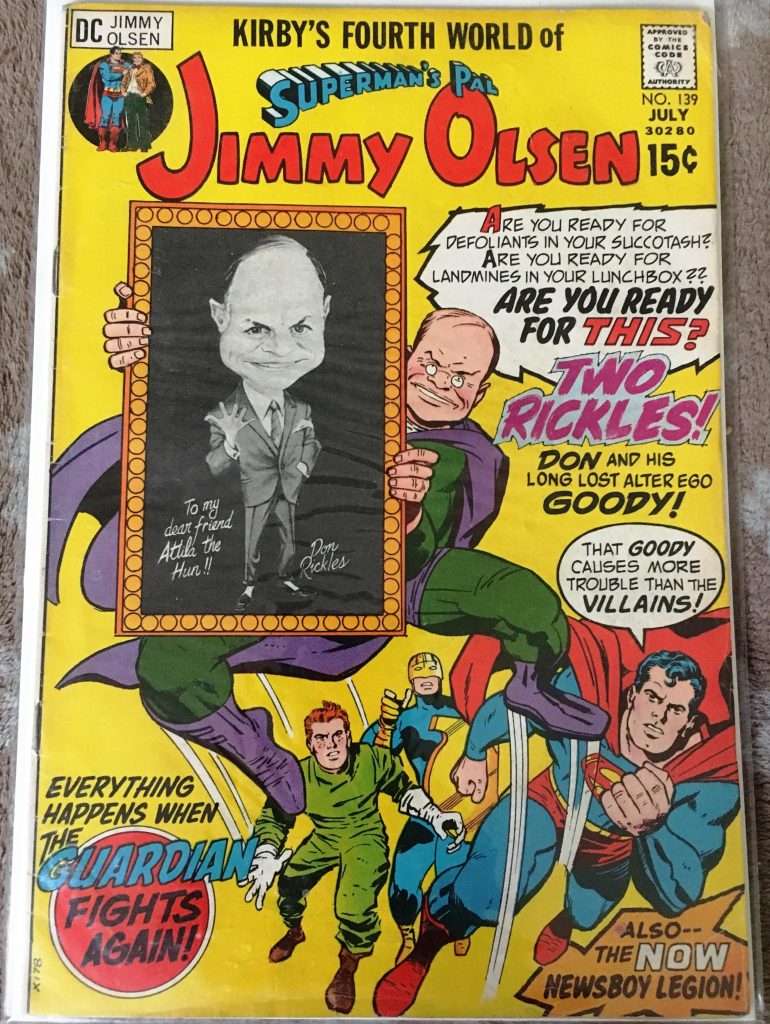 (12) CRAM SESSION. There are always 15 things we don’t know. ScreenRant works hard to fill those gaps, as in the case of  “15 Things You Didn’t Know About Captain Picard”.

Patrick Stewart is a great actor, but foreign accents are not his strong suit. Captain Picard hails from La Barre, France, yet Patrick Stewart chose to use an English accent for his portrayal of the character. He also used an English accent for Charles Xavier in the X-Men movies (who is American) and Seti in The Prince of Egypt (who is Egyptian). You cannot argue with results, however, and the Star Trek expanded universe has offered a few handwave solutions to why Picard speaks with an English accent. These range from everyone in France adopting the accent when English became a universal language, to him actually speaking in a French accent the whole time, but we hear it as English due to his universal translator.

There were a few instances of Picard’s Frenchness that Patrick Stewart snuck into the dialogue. Captain Picard would occasionally say “merde” when facing a nasty situation. This is the French equivalent to saying “shit” when it is being said in exasperation.

(13) ELEMENTARY. The names of four new elements have been officially approved.

The periodic table just got some new members, as the International Union of Pure and Applied Chemistry has officially accepted new names for four elements. Element numbers 113, 115, 117 and 118 will no longer be known by their placeholder names, and instead have all-new monikers decided upon by their discoverers.

The discoveries were first recognized about a year ago, and the proposed names for them were decided upon this past June. Now, chemistry’s highest group has decided they are valid and will move forward with the all-new labels.

(14) NOT TED COBBLER. Pratchett fans will remember Jason Ogg, who once shod an ant just to prove he could in fact shoe anything (for which the price was he would shoe anything, including Death’s horse). A Russian artisan actually made a life-size flea with shoes.

In a supersized world, Prague’s Museum of Miniatures thinks small. Very small. In millimetres, in fact.

A short walk from Prague Castle, this odd museum houses wonders invisible to the naked eye. After entering the room filled with microscopes, I found a desert scene of camels and palms inside the eye of a needle, an animal menagerie perched on a mosquito leg and the Lord’s Prayer written on a hair.

The US and Japanese team found that the brain “doubles up” by simultaneously making two memories of events.

One is for the here-and-now and the other for a lifetime, they found.

It had been thought that all memories start as a short-term memory and are then slowly converted into a long-term one.

Experts said the findings were surprising, but also beautiful and convincing….

(16) NOTHING BUT HOT AIR. Atmosphere is confirmed on an exoplanet.

Scientists say they have detected an atmosphere around an Earth-like planet for the first time.

They have studied a world known as GJ 1132b, which is 1.4-times the size of our planet and lies 39 light years away.

Their observations suggest that the “super-Earth” is cloaked in a thick layer of gases that are either water or methane or a mixture of both.

The study is published in the Astronomical Journal.

Discovering an atmosphere, and characterising it, is an important step forward in the hunt for life beyond our Solar System.

But it is highly unlikely that this world is habitable: it has a surface temperature of 370C.

(17) QUANTUM BLEEP. If you’re going to be taking part in one of history’s iconic moments, you’d better prepare a speech.

(18) ANIME PRAISED. NPR likes Your Name — not a Studio Ghibli production, but animation direction is by a longtime Ghibli artist: “’Your Name’ Goes There”.

In the charming and soulful Japanese anime Your Name, two teenagers who have never met wake up rattled to discover that they have switched bodies in their sleep, or more precisely their dreams. And it’s not just their anatomies they’ve exchanged, or even the identities-in-progress each has managed to cobble together at such a tender age. Mitsuha, a spirited but restless small-town girl of Miyazaki-type vintage, and Taki, a Tokyo high school boy, have also swapped the country for the city, with all the psychic and cultural adjustments that will entail.

(19) CARTOON OF THE DAY. “Are You Lost in the World Like Me?” is a Max-Fleischer-style cartoon on Vimeo, with music by Moby, which explains what happens to the few people who AREN’T staring at their smartphones all day.