(1) SHELDON AND AMY. Some say it’s a bigger wedding than the one coming up across the pond: Yahoo! Entertainment has video — “‘The Big Bang Theory’ wedding gives Mark Hamill the feels”.

Wil Wheaton was originally going to officiate the wedding. But after Howard called in a favor, Mark Hamill replaced him. It was the least Mark could do after Howard found his dog, Bark Hamill.

…Mark Hamill was so taken aback by the touching vows that he was almost too emotional to continue, but he did. Choking back tears, he said, “Then by the power vested in me by evenyoucanperformweddings.com, I now pronounce you husband and wife.”

(2) EXPANSE GETS AXED. Syfy has cancelled The Expanse, however, it may be picked up by another network: “‘The Expanse’ To End On Syfy With Season 3, Will Be Shopped Elsewhere By Alcon”.

The current third season of The Expanse will be the space drama’s last one on Syfy. The cable network has decided not to renew the show for a fourth season, with the last episode slated to air in early July. Alcon Television Group, which fully finances and produces the critically praised series, plans to shop it to other buyers.

“The Expanse transported us across the solar system for three brilliant seasons of television,” said Chris McCumber, President, Entertainment Networks for NBCUniversal Cable Entertainment. “Everyone at Syfy is a massive fan of the series, and this was an incredibly difficult decision. We want to sincerely thank The Expanse’s amazing cast, crew and all the dedicated creatives who helped bring James S.A. Corey’s story to life. And to the series’ loyal fans, we thank you most of all.”

It’s been four years since theme park and luxury resort Jurassic World was destroyed by dinosaurs out of containment. Isla Nublar now sits abandoned by humans while the surviving dinosaurs fend for themselves in the jungles. When the island’s dormant volcano begins roaring to life, Owen (Chris Pratt) and Claire (Bryce Dallas Howard) mount a campaign to rescue the remaining dinosaurs from this extinction-level event. Owen is driven to find Blue, his lead raptor who’s still missing in the wild, and Claire has grown a respect for these creatures she now makes her mission. Arriving on the unstable island as lava begins raining down, their expedition uncovers a conspiracy that could return our entire planet to a perilous order not seen since prehistoric times.

(4) THIS POISON COMES RECOMMENDED. NPR’s Glen Weldon says: “New ‘Rocky And Bullwinkle’ Is Something We Hope You’ll Really Like”.

Nostalgia is a paralytic toxin.

It’s killing us slowly, steadily: Every time an old, smarmy sitcom, or a pallid network drama, or a toy ad that masqueraded as a cringeworthy children’s cartoon gets dredged from the feculent muck of history’s lake bed and rebooted for a contemporary audience, our cultural blood pressure incrementally drops, our collective pulse grows that much threadier, our soft tissues go just a scosh more necrotic. That’s because these properties exude nostalgia’s deadly poison — they’re sticky with it — and there is no antidote….

Nostalgia is no longer a part of our culture. It has become our culture. And the toxin it carries has leached into the groundwater. It riddles the food chain. It’s airborne. We are lost.

Now: All of the above is true. (Resolutely so. Fundamentally so. Incontrovertibly so.)

And here is another thing that is equally true: This new Rocky and Bullwinkle is pretty good!

The first reactions to the new Star Wars film Solo have come out, after its premiere in the US.

And the verdict? While some said it was clunky in parts, most loved it – describing the movie as fun, epic and “a blast”.

There was particular praise for Fleabag star Phoebe Waller-Bridge, in her role as droid L3-37.

(6) TRIVIAL TRIVIA. The first time a hologram was filmed in a movie was in the 1976 theatrical release of Logan’s Run.  Because of this achievement it won a Special Achievement Academy Award Oscar.

Wikipedia:  “For the scene where Logan is interrogated by the Deep Sleep central computer, it was decided genuine holograms would be most convincing, with Saul David advocating a new hologram effect be created.”

For more history, see the American Cinematographer article “The Use of Holograms in ‘Logan’s Run’”.

Scientists in New Zealand have documented what they believe is the largest wave ever recorded in the southern hemisphere.

The 23.8m (78ft) wave was measured by a buoy on New Zealand’s Campbell Island in the Southern Ocean on Tuesday, the country’s weather authority said.

It eclipses a 22.03m wave that was identified south of the Australian state of Tasmania in 2012.

Larger waves have been recorded in the northern hemisphere.

The Meteorological Service of New Zealand (MetService) installed its solar-powered buoy in March. The area is known for big storm activity, but waves had been previously difficult to measure.

(9) PROGRESS REPORT. The Ray Bradbury Experience Museum in Waukegan has a website. They plan to open in 2020.

(10) JDA AND FOGCON. Jon Del Arroz’ version of his experience attending Bay Area convention FogCon (see March 13 Pixel Scroll (item #8)) did not suggest the impression he made would lead to this — 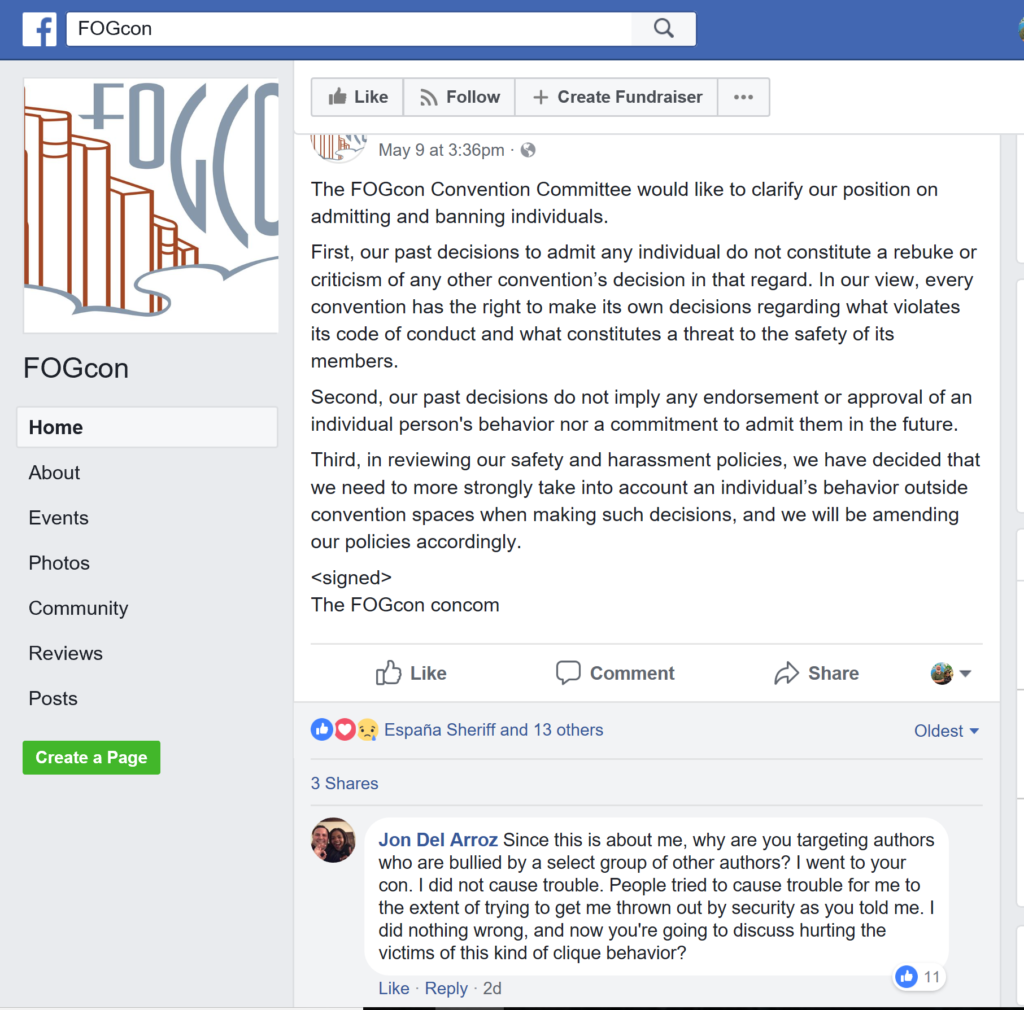 JDA responded in a new blog post [Internet Archive link] by reminding everyone he is already suing the Worldcon:

“It can’t happen to our team, we control the cons,” they might think. Or perhaps they may not think at all. But this is what happens when the path of silencing dissenting ideas is taken. In California, I’ll remind, that there are civil rights laws to address this kind of behavior by organizations. It’s called the Unruh Act, and FogCon, in their attempt to appease a few bullies trying to hate popular conservatives out of fandom, would be good to remember that not applying standards equally to all is very illegal in this state.

You can’t manage what you don’t measure. The adage is especially relevant for climate-warming greenhouse gases, which are crucial to manage—and challenging to measure. In recent years, though, satellite and aircraft instruments have begun monitoring carbon dioxide and methane remotely, and NASA’s Carbon Monitoring System (CMS), a $10-million-a-year research line, has helped stitch together observations of sources and sinks into high-resolution models of the planet’s flows of carbon. Now, President Donald Trump’s administration has quietly killed the CMS, Science has learned.

…The agency declined to provide a reason for the cancellation beyond “budget constraints and higher priorities within the science budget.” But the CMS is an obvious target for the Trump administration because of its association with climate treaties and its work to help foreign nations understand their emissions, says Phil Duffy, president of the Woods Hole Research Center in Falmouth, Massachusetts. And, unlike the satellites that provide the data, the research line had no private contractor to lobby for it.

The cancelation saves only $10 million/year; which seems well below the rounding error; NASA’s budget is about $20 billion/year.