“Every time you send out a newsletter is an opportunity for someone to unsubscribe.” —@dongwon, #Nebulas2018

That comes from a thread with livetweeted highlights of a Nebula Conference panel.

Nice touch. There’s one at every seat at the Nebula Awards banquet. #Nebulas2018 pic.twitter.com/GRLFWfrDXz

(4) UNWASHED MASSES. Don’t tell this to writers, but Jimmy Kimmel has been prowling the streets asking strangers, “Can You Name a Book? ANY Book???”

According to a recent study from the Pew Research Center, almost one in four Americans has not read a book in the past year. So to find out if that is true, we sent a team to the street to ask pedestrians to name a book, and here are the very sad results.

(5) STARSHIP TROOPERS AS SPAGHETTI WESTERN. Fabrice Mathieu has done an incredible job with his new mashup called Far Alamo (Vimeo Staff Pick) in which John Wayne, Clint Eastwood and other Sixties western stars meet the world of Paul Verhoeven when the Alamo is attacked by BUGS!

The value of science fiction: narratives predicting science and technology and effects on future society. Stories enabled by the new, that help readers grasp what is to come and where they might place themselves to affect the outcome of their own stories. These can be more or less inherently entertaining, but the fascination of young people (especially young men) for them is in dreaming of mastery: to understand and control Nature, to vanquish enemies and nurture their families through something other than brute force and violence (though a blend of both is often very popular!)

“Junk science” is those beliefs promoted to persuade or entertain that have either been shown to be false or are simply unsupported by empirical tests. The media world is flooded with it, with sober studies making one small data point on some topic oversimplified and promoted as a breakthrough, to get clicks or publicity for research funding. “Junk science fiction” is therefore a story that borrows the authority of science to make unsupported or frankly false claims as part of a narrative, which nonscientists will accept as plausible or possible. And Arrival is junk science fiction.

(7) NOT EASY BEING GREEN. Tor.com’s Brandon O’Brien says “It’s Time to Talk About Marvel’s Gamora Problem”. Were you running out of things to criticize about Avengers: Infinity War? This will restock your cupboard.

To be clear, this is not me saying that that the movie is bad, or unenjoyable in a general sense. The action was engaging for the most part, and there are some character progressions that I think elicited real dramatic effort from the film. I like how it sets up Tony Stark’s pained, traumatic franchise-long journey from selfish, egotistical brat to responsible, self-sacrificing, if conflicted leader, which I hope they go all in on in upcoming installments. Thor, being my absolute favourite character from the franchise in general, has one really committed throughline, from losing everything that ever mattered to him in two back-to-back genocides to literally taking a beam of white-hot suffering through his body just to regain trust in his own heroic potential. Individual moments, like when Captain America, Black Widow, and Falcon have their first fight with Thanos’ Black Order goons in Scotland, are delightful to look at, visually. And some of the more unlikely on-screen team-ups, like Tony with Doctor Strange, or Thor with Rocket, actually make room for really interesting dialogue.

But ultimately, there’s one aspect of the film that I simply can’t get past. We need to talk about what happens to Gamora….

(8) CAPTAIN MARVEL. The promise of Carol Danvers – What Culture makes a case for “Why Thanos Should Fear Captain Marvel.”

She is one of Marvel’s all time most beloved and powerful characters, especially in more recent years.  Since then, she’s had a new look, gone in various new directions, and has been at the absolute forefront of everything the company has tried to do.  A transition into the MCU was inevitable.

…Even Kevin Feige has said Danvers is as powerful a character as we’ve ever put in a movie.  Her powers are off the charts, and when she’s introduced, she will be by far the strongest character we have ever had.”

(11) DON’T STEAL THAT SMELL! Apparently they just got around to this, 62 years after the product went on the market: “Hasbro officially trademarks Play-Doh smell”.

Toy maker Hasbro announced it has trademarked one of the most recognizable aspects of one of its most iconic products: the smell of Play-Doh.

The Pawtucket, R.I., company announced Friday that the U.S. Patent and Trademark Office has officially recognized the distinctive Play-Doh smell as a registered trademark of the brand, which first hit stores in 1956.

(12) CURIOSITY. The Arthur C. Clarke Center for Human Imagination presents “Why: What Makes Us Curious, with Mario Livio” on June 11.

The ability to ask “why?” makes us uniquely human. Curiosity drives basic scientific research, is the engine behind creativity in all disciplines from technology to the arts, is a necessary ingredient in education, and a facilitating tool in every form of storytelling (literature, film, TV, or even a simple conversation) that delights rather than bores.

In a fascinating and entertaining lecture, astrophysicist and bestselling author Mario Livio surveys and interprets cutting-edge research in psychology and neuroscience that aims at exploring and understanding the origin and mechanisms of human curiosity.  As part of his research into the subject, Livio examined in detail the personalities of two individuals who arguably represent the most curious minds to have ever existed: Leonardo da Vinci and Richard Feynman. He also interviewed 9 exceptionally curious people living today, among them Fabiola Gianotti, the Director General of CERN (who is also an accomplished pianist), paleontologist Jack Horner, and the virtuoso lead guitarist of the rock band Queen, Brian May (who also holds a PhD in astrophysics), and Livio presents fascinating conclusions from these conversations. 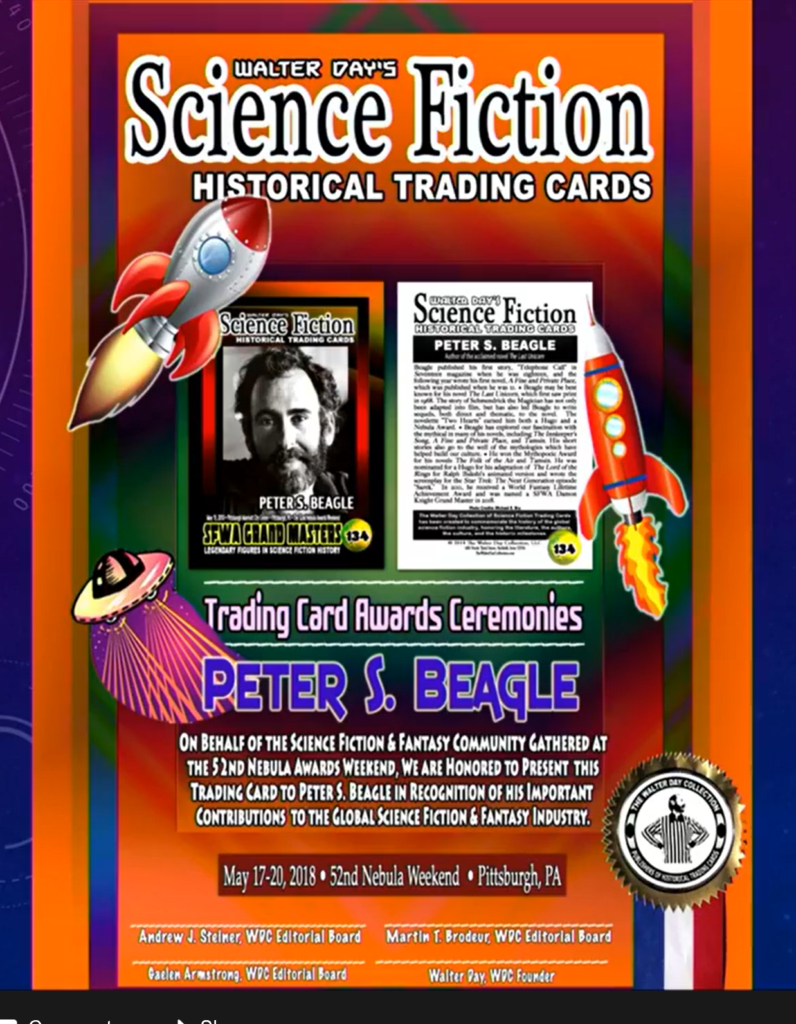 I've made a little @worldcon75 themed charm bracelet. Would anyone else want one? pic.twitter.com/Qp3DH9Ttrh

(15) GAIMAN ADAPTATION. NPR’s Chris Klimek says it’s OK: “London Calling (Occupants Of Interplanetary Craft): ‘How To Talk To Girls At Parties'”. Last year at Cannes this was being called a disaster; no word on whether it’s been reworked.

Men Are From From Mars, Women Are From Venus, a best-selling early-’90s relationships guidebook argued. How to Talk to Girls at Parties, a sweet, slight comic fantasy expanded from an early-aughts Neil Gaiman short story, knows the truth is far more complex: Men and Women Are from Earth, Members of an Advanced Extraterrestrial Species on a Reconnaissance Mission Here While Temporarily Wearing the Bodies of Men and Women are from…. well, we never find out where they’re from, exactly. But every planet has its misfits.

(16) STILL READY PLAYER ONE. Did I already link to Glen Weldon’s review of this movie? Just in case: “Arcade Firewall: ‘Ready Player One’ REALLY Loves The ’80s”.

There will be grunts.

Grunts of recognition, that is. If you watch Steven Spielberg’s solidly built sci-fi phantasmagoria Ready Player One in a crowded theater, there will be grunts aplenty, so prepare yourself for them.

Every time any beloved or at least recognizable nugget of 1980s popular culture turns up onscreen, one or (likely) more of your fellow audience members will let out a low, pre-verbal phoneme, a glottal unh, to signify that they do, in fact, recognize said nugget and wish to inform those around them of this key development. This grunt, by the way, is a subspecies of the one heard at live theater, whenever a given patron wishes to express their comprehension of, and/or amusement at, some passage of dialogue they find particularly trenchant (that one’s more an amused hm!).

(17) VEGGIES IN ORBIT. GeekWire headline: “Small seeds could lead to a giant leap in space farming”.

The next Orbital ATK delivery to the space station will carry several strains of seeds for Arabidopsis, a flowering plant that’s closely related to cabbage and mustard. These will be grown in the Final Frontier Plant Habitat which was delivered on an earlier mission. The same genetic variants will be grown on Earth and used as baselines to compare harvested specimens sent back from the space station. You may recall that an earlier experiment in the overall mission to test growing of plants (including crops) in space involved lettuce, which was actually consumed by astronauts onboard the station.

When Orbital ATK’s Antares rocket launches a robotic Cygnus cargo spaceship toward the International Space Station, as early as Monday, it’ll be sending seeds that could show the way for future space farmers.

The Antares liftoff is currently set for 4:39 a.m. ET (1:39 a.m. PT) on Monday from NASA’s Wallops Flight Facility in Virginia, with an 80 percent chance of acceptable weather. NASA’s live-streaming coverage of the countdown begins at 1 a.m. PT Monday.

More than 7,200 pounds of supplies, equipment and experiments will be packed aboard the Cygnus. One of the smallest payloads consists of seeds for the Final Frontier Plant Habitat — part of a $2.3 million, NASA-funded initiative that involves researchers from Washington State University, Pacific Northwest National Laboratory, the University of New Mexico and Los Alamos National Laboratory.

The automated habitat was delivered during previous cargo resupply missions and set up for planting. Once the Cygnus’ cargo arrives, astronauts can proceed with the habitat’s first official science experiment, which is aimed at determining which genetic variants of plants grow best under weightless conditions. 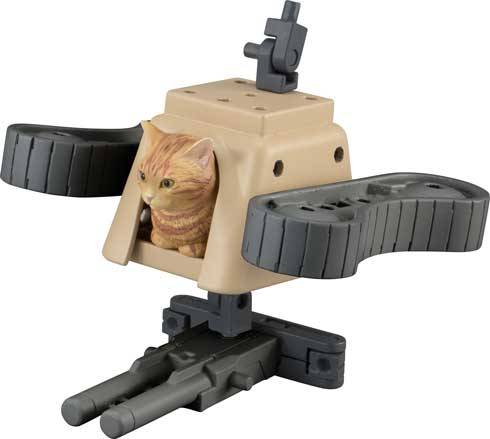 The clip chronicles the history of the ‘Deadpool’ franchise from 2008 to 2018, also giving it a 10-year history like Marvel Studios’ MCU – it even has the same format, aesthetic, as well as the use of dramatic background music. Clocking in at just over a minute, the clip features only Deadpool, unlike the MCU’s version which had commentaries from several key players in the film series, as he narrates what happened in the last decade that led to the creation of the upcoming sequel. The clip is filled with the character’s signature brand of humor as he honestly speaks about Reynolds’ starring in ‘Green Lantern’ and ‘X-Men Origins: Wolverine,’ which certainly didn’t help their cause, as well as Fox’s multiple rejections of the project

Main problem in his view is it has tried to be more than the first and lost what he liked about the first one.