(1) WISCON 42 COC INCIDENT. Wiscon 42 announced on social media that action was taken in response to a Code of Conduct violation on a program item today. Their Twitter thread begins —

There was an unacceptable incident at a panel this morning. It should be obvious, but WisCon does not tolerate Nazi and Confederate propaganda or apologia. https://t.co/4OWfvc3BCz #wiscon42

And they put up a full blog post: “Killable Bodies In SF Panel”

During the Killable Bodies In SFF panel at WisCon this morning (Sunday), a panelist engaged in Nazi and Confederate apologia and also appeared to posit that disabled or injured people sometimes “have to be sacrificed.”

They continued this behavior even after the audience and other panel members expressed the harm this was causing them.

WisCon rejects these ideas. They are in conflict with our Code of Conduct. The panelist in question will be banned and asked to immediately leave convention spaces.

The relevant passage from the Code of Conduct is here…

If you or anyone you know are in need of any support following this experience, please contact us. We will be working to find folks who can provide emotional support to you.

ETA: This particular individual has been banned for WisCon 42. The decision as to whether this ban will be extended in the future will be determined by our Anti Abuse Team post-con. Should you have information to contribute, you are welcome to email [email protected]

Although some deductive guesses have been made about who the panelist was, confirmation has yet to be issued. The program schedule described the item and listed the following participants:

“The Desire for Killable Bodies In SFF”

In SFF with an action element there’s a desire for cool giant battle scenes, heroes who spin, twirl, slice off heads, and general melee violence. This is an old background trope: the killable mook, guard, or minion whose life can be taken in a cool or funny way is familiar from traditional action films. But many SFF stories take this trope further with a killable race or non-sentient army: the Orcs in Lord of the Rings, the Chitauri in Avengers, and the many robot armies that we see represented solely so that heroes can create cool violent carnage without having to answer difficult moral questions. What happens when SFF comes to rely on this trope? If we’re going to have violent action in SFF, is this better than the alternative? Is it ever not just super racist?

“your friend sam” livetweeted the panel but did not name the speaker:

Panelist opines that it is important to understand motivations of Nazis; audience pushes back forcefully#wc42 #KillableBodiesinSFF

EDITOR’S REQUEST: Please do not add your speculation about the person’s identity in comments. I have already figured out who it probably was and could put that guess here — I’m waiting for a witness, or the con, to name the person.

(2) TROLL BRIDGE. Thanks to Signature for throwing a spotlight on this Pratchett-themed production: “Trailer Surfaces For Fan-Made Discworld Film”.

Inspired by Terry Pratchett’s Discworld series, “Troll Bridge” isn’t like most other films – it’s spent over a decade in production, and is entirely fan-made. Such a project may sound like it’s cursed to remain in limbo forever, but the film now has a trailer and is being submitted to festivals around the world. Between this and the upcoming Good Omens adaptation, it appears 2019 may be Pratchett’s time to shine. In the meantime, “Troll Bridge” is available for pre-order thanks to crowdfunding – but a Blu-ray is going to set you back $85.

An old barbarian and his talking horse, embark on a suicidal quest to battle a bridge troll. 15 years in the making TROLL BRIDGE is an ambitious odyssey of work in bringing Terry Pratchett’s Discworld to cinematic life.

It is my sad duty to note the passing of Gardner Dozois today, of an overwhelming systemic infection, at Pennsylvania Hospital. Gardner was the best of friends, the best of editors, and the best of writers. And now he’s gone.

2/ The best information on this topic was from Apollo 12, when Pete Conrad and Alan Bean landed their Lunar Module 160 m away from the old Surveyor 3 ("S3") spacecraft. S3 had sat on the Moon deactivated for about 2 and a half years exposed to the lunar environment.

The older Lando Calrissian could be making a return to the big screen for Star Wars 9. 81-year old actor Billy Dee Williams is rumored to be preparing to reprise his role as the ever charming Calrissian after it was revealed that he has been training 3 days a week. Lando has been in the news quite a bit lately due to the release of Solo: A Star Wars Story and Donald Glover’s portrayal of the younger version of the character.

MegaCon Orlando took to social media to reveal that Billy Dee Williams is on a completely new diet for his return as Lando Calrissian. While this news on its own doesn’t really seem like much, Carrie Fisher and Mark Hamill did the same thing when preparing for 2015’s The Force Awakens and again for The Last Jedi. Williams could be just making lifestyle choices, but the timing is a little close to the production start of Star Wars 9, which is reportedly going to start in July.

(8) FOLLOW ME BOYS. Jon Del Arroz told his 12 donors he is abandoning Patreon and shifting his efforts to Freestrtr after the site banned Faith Goldy for hate speech. He told his blog readers it’ll be a sacrifice for him: “Supporting Faith Goldy – I Disassociate With Censoring Site Patreon” [Internet Archive].

It will be a financial hit for the short term. When moving platforms like this, usually only 80% of people make their way over, and freestrtr takes a bit more of a percentage than Patreon, but its time to make a change, and time to disassociate with companies that would gladly deplatform people like me.

He has 10 Freestrtr donors as of this writing, which puts his 80% estimate spot on.

(9) PAID REVIEWS ON AMAZON. In the April 24 Washington Post, Elizabeth Dwoskin and Craig Timberg report on the vast number of paid reviews still on Amazon, although the reviews are now for products rather than books.  The Post found that 58 percent of the reviews for Bluetooth speakers and 67 percent for testosterone supplements were from paid endorsers.

(10) NO CONCERN OF CERN. Next time you’re in Meyrin, Switzerland, Atlas Obscura advises you to pay homage to the “Birthplace of the Web”. 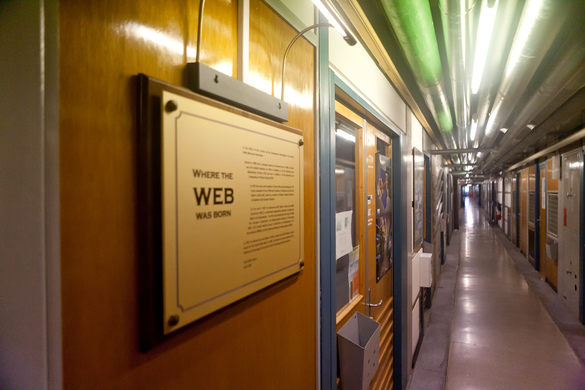 It may look like any other hallway, but look closely and you’ll notice a historical plaque commemorating a monumental event in digital history: the birth of the web.

The World Wide Web was invented in 1989 by British scientist Tim Berners-Lee. The web, though omnipresent in the age of the internet, was originally meant to be a communication tool for scientists scattered at universities and other institutes around the world.

Berners-Lee was working at CERN, the European Organization for Nuclear Research, when he developed the world’s first website. Though simple in appearance, this amazing technological feat revolutionized how we share and store information.

The first website was dedicated entirely to itself: a white page bearing nothing but typed hyperlinks. It described the WWW project, as well as core features of the web like how to set up a server and access documents. It was hosted on Berners-Lee’s NeXT computer, which is still at CERN. In 1993, CERN put the World Wide Web software in the public domain.

Interestingly, Berners-Lee faced some pushback for his invention, as some at CERN believed it was a waste of resources and wasn’t part of the organization’s core mission. Now, however, the organization at least marks the corridor where the web was born.

(11) THE EDITORIAL PROCESS. Kim Huett did a clean scan of this illo from Science-Fiction Times V12 #278 (September 1957) (which also is online at Fanac.org) and wrote a short introduction. Huett says —

I expect the artists among you will appreciate Kelly Freas’ depiction of the editorial process. The rest of you will hopefully enjoy Freas exploring his inner ATom (or is just me who sees a resemblance?) 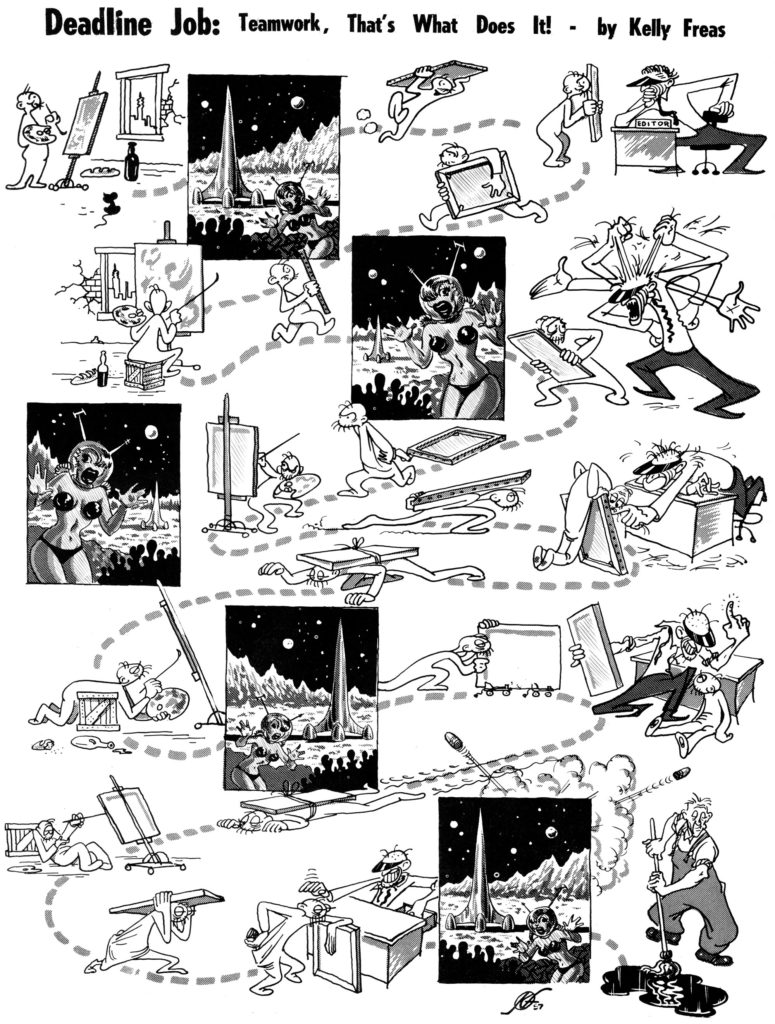