(1) TINGLE IN YOUR PACKET. Maybe this helps explain why the Hugo Voter Packet wasn’t released on May 23.

my story will have TWO WARNINGS in Hugo Awards packet, one for explicit content and one for spelling. Thank you. pic.twitter.com/oJPgfU3T0u

When Sony Pictures’ second trailer for its female-fronted Ghostbusters reboot appeared online May 18, fans initially had to find it on Facebook. The studio had switched from YouTube, which hosted the first trailer, in a deliberate effort to combat a cacophony of negative reaction emanating from a very vocal minority online.

With the YouTube trailer, bloggers could embed the player on their sites to congregate negativity on Sony’s official YouTube channel, a move akin to spraying toxic green slime all over the studio. As a result, the Ghostbusters teaser was dubbed the most disliked trailer ever — not the kind of buzz Sony or director Paul Feig want just months before the $150 million comedy’s July 15 release.

Given the high stakes riding on the franchise reboot starring Melissa McCarthy, Kristen Wiig, Leslie Jones and Kate McKinnon, the studio was determined not to let the anti-Ghostbusters contingent mar the movie’s perception. “What tends to happen with a beloved property is the fanboy or the fangirl shows up and says, ‘How dare you remake this?’ ” says Sony domestic marketing president Dwight Caines.

But the umbrage taken has been even more pronounced than for the average reboot, and many believe it’s because Ghostbusters marks the first major film to get a female-centric redo (plans for others are in the works, from Ocean’s Eleven to The League of Extraordinary Gentlemen). Gender politics is rearing its ugly head, some say, with even Donald Trump weighing in last year on Instagram: “Now they’re making Ghostbusters with only women. What’s going on?!”

(3) TORCHWOOD. ScienceFiction.com tells about an audio reunion of the Torchwood stars.

Big Finish has been issuing new ‘Torchwood’ adventures and not only have the original actors been returning to provide their voices, but the stories are set before the third series ‘Children of Earth’ meaning that fan favorite Ianto Jones played by Gareth David-Lloyd is still alive in them.

Recently, Eve Myles, who played one of the show’s two focal characters Gwen Cooper announced she was retiring the role, but it appears she has one more go-round for the character.  Myles will reunite with John Barrowman/Captain Jack Harkness, Kai Owen/Rhys Williams and David-Lloyd for the newest Big Finish miniseries ‘Torchwood: Outbreak’ which will be released as a three-part boxed set this November.  Previously, the stars each headlined their own solo installments, except for Myles and Owen who appeared together in ‘Forgotten Lives’.  But this will be the first time all four will participate together in one audio story. 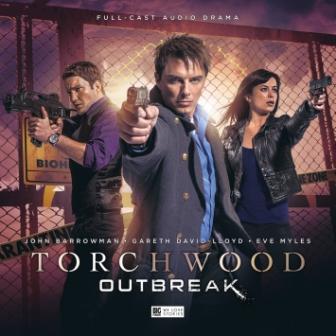 (4) HUMBLE AT TWENTY-ONE. The Small Beer Press fiction HumbleBunde offers up to 21 books worth as much as $184.

Pay $1 or more for Meet Me in the Moon Room by Ray Vukcevich, Trash Sex Magic by Jennifer Stevenson, The Fires Beneath the Sea by Lydia Millet, Fire Logic by Laurie J. Marks, The Liminal People by Ayize Jama-Everett, Generation Loss by Elizabeth Hand, Tyrannia by Alan DeNiro, The Monkey’s Wedding and Other Stories by Joan Aiken, and Stranger Things Happen by Kelly Link. Pay more than the average price to also receive A Stranger in Olondria by Sofia Samatar, Couch by Benjamin Parzybok, Travel Light by Naomi Mitchison, The Entropy of Bones by Ayize Jama-Everett, Kalpa Imperial by Agelica Gorodischer, translated by Ursula K. Le Guin, Solitaire by Kelley Eskridge, and North American Lake Monsters by Nathan Ballingrud.

Pay $15 or more for all of that plus Carmen Dog by Carol Emshwiller, The Child Garden by Geoff Ryman, Storyteller: Writing Lessons and More from 27 Years of the Clarion Writers’ Workshop by Kate Wilhelm, After the Apocalypse by Maureen F. McHugh, and Archivist Wasp by Nicole Kornher-Stace.

The bundle supports charities and buyers can direct where the money goes — between Small Beer Press, Worldreader, and, if you’d like, a second charity of your choice via the PayPal Giving Fund.

Starting May 30 at noon Pacific time, every two weeks I’ll be hosting a chat on Google hangouts talking about what we’re doing, what’s coming up, recent issues and achievements, and the state of the industry overall. The chat will be broadcast live as well as recorded for the SFWA Youtube channel, and will feature a small group (4-5 people) of SFWA officials, staff, volunteers, members, and other visitors as appropriate each time.

Both SFWA members and non-members are encouraged to submit questions and comments for use on the show. You can submit them by mailing them to cat.rambo@sfwa.org or by posting them here.

(7) WHAT MADE THEM MAD. University of Oregon’s Jordan Schnitzer Museum of Art (JSMA) hosts “Aliens, Monsters, and Madmen: The Art of EC Comics” through July 10.

Aliens, Monsters, and Madmen celebrates the achievements of the most artistically and politically adventurous American comic-book company of the twentieth century: Bill Gaines’s Entertaining Comics, better known to fans all over the world as EC. Specializing in comic-book versions of popular fiction genres—particularly Crime, Horror, War, and Science Fiction—the company did far more than merely adapt the conventions of those genres to the comics medium.  In the case of the now legendary Science Fiction and Horror titles, Weird Science and Tales from the Crypt, the creators at EC actively extended those genre conventions, while simultaneously shaping the imaginations of a subsequent generation of writers and filmmakers, such as Stephen King, George Lucas, John Landis, George Romero, and Steven Spielberg.

EC also broke new ground in the realm of satire as the publisher of MAD, an experimental humor comic that parodied the very stories that were elsewhere its stock in trade. EC Comics offered a controversial mix of sensationalism and social provocation, mixing titillating storylines and imagery with more overtly politically progressive material. Alongside comics about beautiful alien insect-women who dine on unsuspecting human astronauts, for example, they also tackled subjects that other popular media of the era avoided, including racism, corruption, and police brutality.  As a result, the company attracted the disapproval of parents, politicians, and moralists everywhere, and was ultimately driven out of business as the result of a conservative “anti-comics” backlash in 1954. (Only MAD survived, by becoming a magazine in the mid-1950s; it remains in print today.)

The exhibition is curated by Ben Saunders, professor, Department of English. Saunders curated the JSMA’s previous comics exhibitions, Faster Than A Speeding Bullet: The Art of the Superhero (2009) and Good-Grief!: A Selection of 50 Years of Original Art from Charles M. Schulz’s Peanuts (2012).

The JSMA is located on the University of Oregon Campus in Eugene.

I was surprised and deeply saddened on May 14th to learn of the death from cancer of comic artist and writer Darwyn Cooke, at the much too early age of 53.

Over the past decade, I have gradually lost most of my interest in current comics, especially ones from DC and Marvel that deal with long established characters; the medium (always with some honorable exceptions, of course) has largely grown too violent, too jaded, too self aware and self indulgent to produce much work that engages me.

The shock for shock’s sake taboo breaking, the endless restarts and reboots, the universe-altering big events that promise to “change everything” — they all long ago began to merge together into one dull blur, like an old chalkboard that has been written on and erased too many times. How often can you really “change everything” before you are in danger of eradicating the ties of memory and affection and shared history that connect a medium and its audience? That’s what happened with me, anyway. What the hell — maybe I’m just getting old.

There are exceptions though, as I mentioned, and Darwyn Cooke was one of them. I was always eager to see anything he produced; when a new Cooke was in my hands, I felt as young as I did the day I bought my first comic book (House of Mystery 175, July-August, 1968).

(11) CONNECTIONS. On Twitter yesterday comedian and CNN United Shades of America host W. Kamau Bell mentioned that he and N.K. Jemisin are cousins together in Mobile, Alabama.

Here’s the Tweet. (And Jemisin dropped in with a couple of replies.)

So proud of my cousin! We were just 2 weird kids in Alabama talking about doing big things. https://t.co/emHiaO0Vxq https://t.co/cp1wuEX0R8

Admittedly @nkjemisin's big thing was always to be a fantasy writer whereas mine at the time was to be bitten by a radioactive spider.

(12) A HEARTFELT APOLOGY. From The Jimmy Kimmel show.

The most recent episode of “Game of Thrones” was particularly upsetting for fans of the show. Even now people are still talking about the shocking turn of events at the end of the show – and producers DB Weiss and David Benioff took the extraordinary step of apologizing to their fans.

[Thanks to John King Tarpinian, and Marc Criley for some of these stories. Title credit goes to File 770 contributing editor of the day Ian P.]