Voting for both will end on Tuesday, July 31, 2018 at 11:59 PM PDT.  Online voting forms and Voter Packet downloads for both sets of awards are located on the Worldcon 76 website. The 2018 ballot can be found at https://www.worldcon76.org/hugo/vote.php and the 1943 ballot can be found at https://www.worldcon76.org/hugo/retro_vote.php.

(2) SHAKEN, NOT BEAMED UP. This is not my father’s Popular Mechanics, full of fannish esoterica like “Ten Forward Vodka Is What Riker Puts in His Martini”. 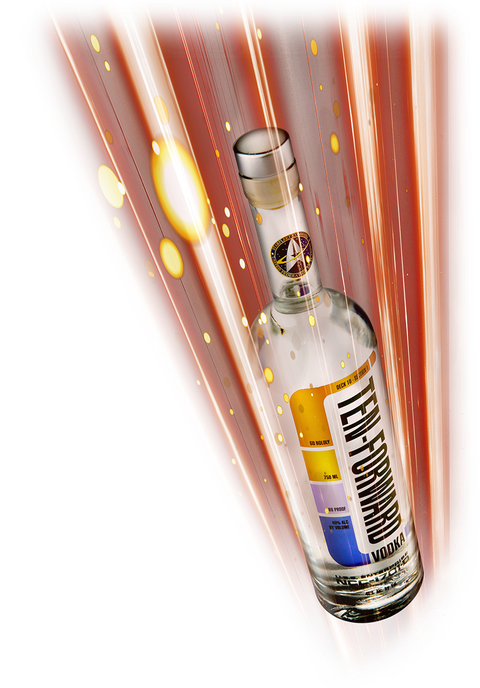 The next time you want to grab a vesper martini with a Vulcan or pour yourself a holodeck Harvey Wallbanger, reach for a bottle of Ten Forward. That’s right: There is now an officially licensed Star Trek: The Next Generation vodka made by Silver Screen Bottling Company and named for Guinan’s bar on the USS Enterprise-D.

The best thing about this novelty booze is clearly the bottle. Its type and graphics are an homage to the LCARS computer system seen on all the terminals and pads used throughout the show.

(3) AIN’T NO MOUNTAIN HIGH ENOUGH. BBC does a word study: “Tsundoku: The art of buying books and never reading them”.

Do you have a habit of picking up books that you never quite get around to reading?

If this sounds like you, you might be unwittingly engaging in tsundoku – a Japanese term used to describe a person who owns a lot of unread literature….

The word “doku” can be used as a verb to mean “reading”. According to Prof Gerstle, the “tsun” in “tsundoku” originates in “tsumu” – a word meaning “to pile up”.

So when put together, “tsundoku” has the meaning of buying reading material and piling it up.

“The phrase ‘tsundoku sensei’ appears in text from 1879 according to the writer Mori Senzo,” Prof Gerstle explained. “Which is likely to be satirical, about a teacher who has lots of books but doesn’t read them.”

While this might sound like tsundoku is being used as an insult, Prof Gerstle said the word does not carry any stigma in Japan.

(4) AMAZON’S AMBITIOUS GENRE TV PLANS. SYFY Wire has published a story (“Star Trek 4 Writers to Helm Lord of the Rings TV Series and More from Amazon Studios”) with a variety of news from Amazon about upcoming genre shows. The headline news is that “writers JD Payne and Patrick McKay [who wrote the upcoming 4th Star Trek movie] will oversee the Lord of the Rings TV series” which is expected to air no sooner than 2020. The series will be set in a time prior to the events of the LorR books (and movies) but little other details has been annoiunced by the studio. Amazon Studios head Jennifer Salke has said “It’s a vast world and so many ways to go with that property. We brought in so many people with abundant enthusiasm for the property. They will move us into the the next stage as they build out this world.”

The SYFY Wire story also brings news of other genre series from Amazon:

(Can anyone parse that last one and tell me what that last sentence really means?)

(5) THIRTY YEARS OF THE SIMPSONS?! Mike Riess, veteran of The Simpsons, has written a book about the series: Springfield Confidential.

Four-time Emmy winner Mike Reiss—who has worked on The Simpsons continuously since episode one in 1989—shares stories, scandals, and gossip about working with America’s most iconic cartoon family ever. Reiss explains how the episodes are created, and provides an inside look at the show’s writers, animators, actors and celebrity guests. He answers a range of questions from Simpsons fans and die-hards, and reminisces about the making of perennially favorite episodes.

In his freewheeling, irreverent comic style, Reiss reflects on his lifetime inside The Simpsons—a personal highlights reel of his achievements, observations, and favorite stories. Springfield Confidential exposes why Matt Groening decided to make all of the characters yellow; dishes on what it’s like to be crammed in a room full of funny writers sixty hours a week; and tells what Reiss learned after traveling to seventy-one countries where The Simpsons is watched (ironic note: there’s no electricity in many of these places); and even reveals where Springfield is located! He features unique interviews with Judd Apatow, who also provided the foreword, and Conan O’Brien, as well as with Simpsons legends Al Jean, Nancy Cartwright, Dan Castellaneta, and more…

(6) REVERSE PSYCHOLOGY. Adweek points out a reference-filled video: “Buckle Up. This Short Film From a Financial Tech Startup Is Part Black Mirror, Part ‘They Live’”.

Bank ads love to talk about your dreams. A bucolic retirement, an Ivy League education for your kids, that five-bedroom home with the “Sold” sign in the yard.

But a new long-form ad—or branded short film, more accurately—from Canadian financial tech startup Koho positions banks not as the enablers of your best life but rather as harvesters of dreams, brutally siphoning customers of both their money and their aspirations.

It’s not a pretty picture.

Sci-fi aficionados will notice no small number of references, some subtle and others overt, to previous movies, shows and even ads. While the overall tone may remind modern TV viewers of the Netflix anthology Black Mirror, Chaney says his team has counted roughly 30 references in “Dream Thieves,” including callbacks to A Clockwork Orange, Poltergeist and Apple’s iconic ad “1984.”

When you complain about slow internet service, remember this:

(12) A THOUSAND TIMES, NEIGH. The Verge shows why “The future of search-and-rescue robots might be centaur, not human”. The embedded video has the bot doing what looks for all the world like a tai chi routine for the first several seconds of the ~3 min video.

Centauro is the latest experiment by scientists to find the most adaptable and useful body-shape for robots designed to help in disasters. Usually, these machines are built like humans, with two arms and two legs, but researchers are increasingly finding that hybrid designs offer more flexibility. With its four wheeled legs, Centauro is more stable than a humanoid bot, but still retains the two forward-facing arms needed for manipulating objects like tools and doors. (Or, as in the video below, karate-chopping some plywood for fun.)

Air temperatures have stubbornly lingered above 90 degrees in many parts of Sweden, Finland and Germany, and water temperatures are abnormally high — 75 degrees or higher in the usually temperate Baltic Sea.

Finland’s Loviisa power plant, located about 65 miles outside Helsinki, first slightly reduced its output on Wednesday. “The situation does not endanger people, [the] environment or the power plant,” its operator, the energy company Fortum, wrote in a statement.

The seawater has not cooled since then, and the plant continued to reduce its output on both Thursday and Friday, confirmed the plant’s chief of operations, Timo Eurasto. “The weather forecast [means] it can continue at least a week. But hopefully not that long,” he said.

(14) NO SINGULAR SENSATION. Forbes says the public needs to catch up, that model is decades out of date: “There Was No Big Bang Singularity”.

…There is a theorem, famous among cosmologists, showing that an inflationary state is past-timelike-incomplete. What this means, explicitly, is that if you have any particles that exist in an inflating Universe, they will eventually meet if you extrapolate back in time. This doesn’t, however, mean that there must have been a singularity, but rather that inflation doesn’t describe everything that occurred in the history of the Universe, like its birth. We also know, for example, that inflation cannot arise from a singular state, because an inflating region must always begin from a finite size.

Every time you see a diagram, an article, or a story talking about the “big bang singularity” or any sort of big bang/singularity existing before inflation, know that you’re dealing with an outdated method of thinking. The idea of a Big Bang singularity went out the window as soon as we realized we had a different state — that of cosmic inflation — preceding and setting up the early, hot-and-dense state of the Big Bang. There may have been a singularity at the very beginning of space and time, with inflation arising after that, but there’s no guarantee. In science, there are the things we can test, measure, predict, and confirm or refute, like an inflationary state giving rise to a hot Big Bang. Everything else? It’s nothing more than speculation.

(15) BITE ME. Here’s some more bad science you’ll be less surprised to hear about. The Washington Post’s Emily Yahr notes that Discovery broadcast Megalodon:  Fact vs. Fiction last night, even though there is no evidence that hungry prehistoric sharks are in the ocean: “A fake Shark Week documentary about megalodons caused controversy. Why is Discovery bringing it up again?”

At the beginning of this special, a narrator explains the dust-up. Unflattering headlines from news articles at the time (“Discovery kicks off Shark Week with dishonest documentary”) and angry tweets fly across the screen. The special keeps a tongue-in-cheek tone; at one point, shark conservationist Julie Andersen acknowledges the scenes of Shark Alley, a real-life area off the South African coast, was pretty accurate in the fake film.

“But let me repeat myself: There are no megalodons!” she adds.

“We get it, smarty-pants. No megalodons roam the modern seas,” the voice-over narrator shoots back. “But when they did, the oceans were like a Darwinian Thunderdome, survived only by the fittest and biggest.”

(16) HOLD FAST. Beth Elderkin at Gizmodo’s io9 takes a look at Star Wars weapons and the characters who love them (“A Shockingly In-Depth Examination of How Star Wars Characters Hold Their Weapons”). Though, one might quibble about just how shockingly in-depth it is. Blasters, light sabers, stunners, and even capes are considered. Poses and grips are dissected. As the author puts it, “We’re here to not only explore but celebrate the art of looking cool while holding a toy gun or fluorescent lightbulb on a stick.”

[With apologies to Culture Club]