(1) FREE ELIZABETH BEAR BOOK. Joey Eschrich, Editor and Program Manager, Center for Science and the Imagination at Arizona State University wants Filers to know they recently published We Have Always Died in the Castle, a free ebook featuring a near-future story about virtual reality by Elizabeth Bear. It also features a couple of stunning original illustrations by Melissa Gay. 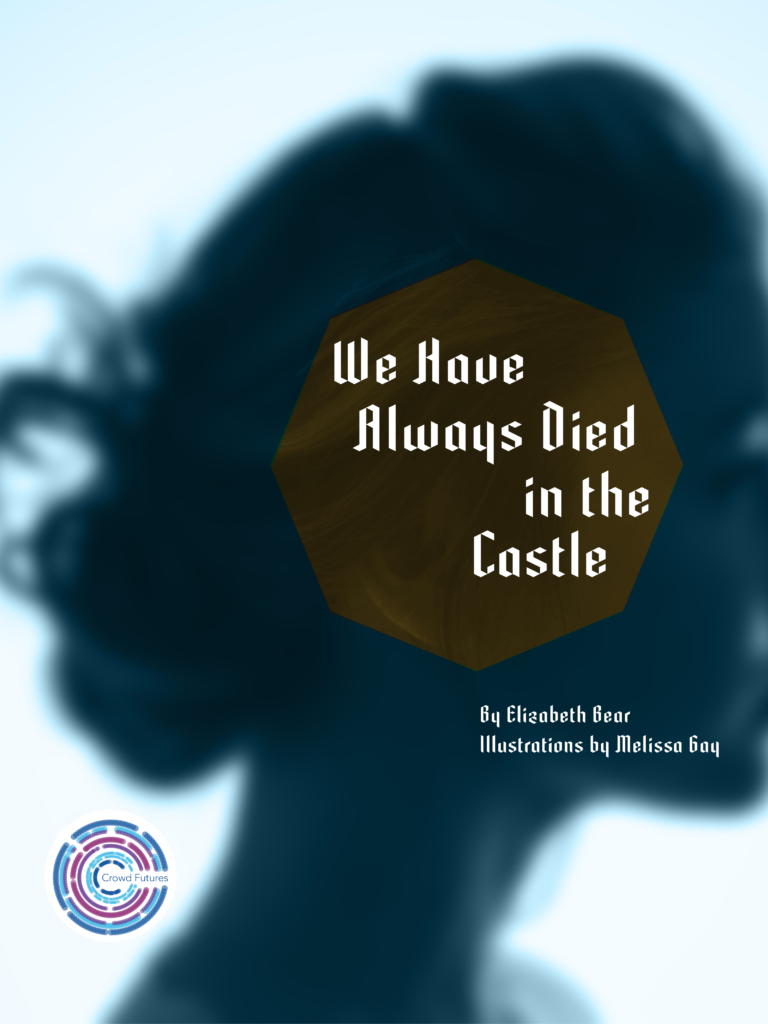 We Have Always Died in the Castle is the first story in the Crowd Futures project from Arizona State University. An experiment in collaborative storytelling, Crowd Futures brings authors and illustrators into dialogue with members of an intellectually curious public to participate in the creative process by proposing scenarios, sharing ideas, weighing options, and navigating the uncertainties of our looming scientific and technological discoveries.

(2) ON THE RADIO. SF Concatenation’s Jonathan Cowie tells Filers when to tune in to BBC Radio 4.

Cowie says, “A slight shame this was not broadcast a couple of weekends ago as that would have been compensation for those of us who did not go to the Eurocon in Amiens, the home of Jules Verne” 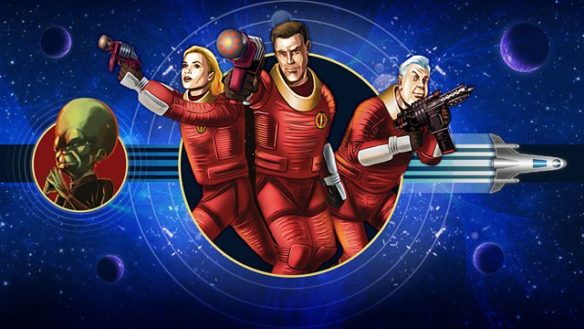 (4) ORDER A NORSE COURSE. Francesca Strait, in “Channel Your Inner Thor At This Viking Restaurant in Australia” on CNN.com, says that if you’re in Sydney or Melbourne, you can have a Viking feast at Mjølner restaurant, named after Thor’s hammer.

It might be thousands of miles from Scandinavia, but this Viking-themed restaurant offers a contemporary interpretation of Norse traditions Down Under.

Of course, Thor himself, Chris Hemsworth, is a proud Aussie and featured in a recent Crocodile Dundee-themed tourism ad for Australia, so it’s only fitting the feasting halls of Asgard are being recreated in Oz. 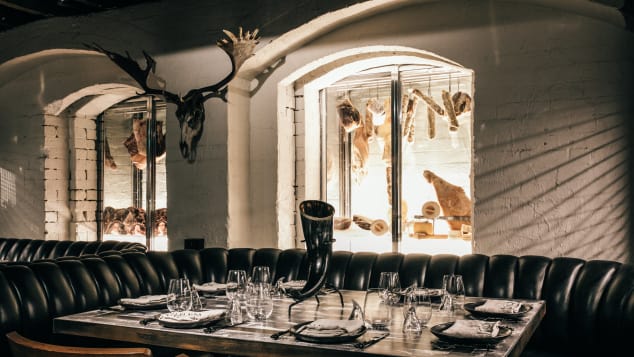 The classic Bussard ramjet novel is, of course, Poul Anderson’s Tau Zero. What was for other authors a convenient prop was one of the centerpieces of Anderson’s novel. The Leonora Christina sets out for Beta Virginis, a nearby star. A mid-trip mishap robs the ship of its ability to slow down. Repairs are impossible unless they shut down the ramjet, but if the crew did that, they would instantly be exposed to lethal radiation. There’s no choice but to keep accelerating and hope that the ship will eventually encounter a region in the intergalactic depths with a sufficiently hard vacuum so that the ramjet could be safely shut down. Even if they did find such a region, the crew is still committed to a journey of many millions of light years, one that will forever distance them from their own time.

Even before Tau Zero, Bussard ramjets were everywhere. Larry Niven’s A Gift From Earth feature an egregiously hierarchical society that is toppled thanks to a package delivered by robotic ramship. Jo Walton’s review of that novel is here.

(James Davis Nicoll also proudly notes, “I got name-checked in the Guardian” — “The English language reigns now, but look at the fate of Latin”.

The point is made graphically by a famous description attributed to James Nicoll: “We don’t just borrow words; on occasion, English has pursued other languages down alleyways to beat them unconscious and rifle their pockets for new vocabulary”.

(7) HINTING UNDINTING. An utterly brilliant challenge on Reddit: In limerick form (AABBA), and without saying its name, what is your favorite movie?

There once was a man with a dream:
“Put a dream in a dream!” He would scream.
There’s a top at the end,
And we all pretend
That we definitely know what it means.

Two rockers were failing a class,
so they telephoned back to the past.
They escaped awful fates
with some help from Socrates,
and the speech by Abe Lincoln kicked ass.

(One commenter says the choice to rhyme fates and Socrates was excellent.)

It’s a tale that’s a bit unbelievable:
A princess is now irretrievable.
When a man all in black
Catches up from the back
The kidnapper says, “Inconceivable!”

Internal IBM documents show that its Watson supercomputer often spit out erroneous cancer treatment advice and that company medical specialists and customers identified “multiple examples of unsafe and incorrect treatment recommendations” as IBM was promoting the product to hospitals and physicians around the world.

(12) POLITICAL DISCOURSE. One small step for man, one giant bleep for mankind. From the Washington Post — “Perspective What is Bigfoot erotica? A Virginia congressional candidate accused her opponent of being into it.”

Our weird political era just got a little hairier. For the first time, millions of Americans are asking, “What is Bigfoot erotica?”

That question has been inspired by Leslie Cockburn, a Democrat who’s running for Congress in Virginia’s 5th District. On Twitter this Sunday, Cockburn accused her Republican opponent, Denver Riggleman, of being a “devotee of Bigfoot erotica.” Her tweet included a crudely drawn image of Bigfoot — with the monster’s genitalia obscured — taken from Riggleman’s Instagram account. She added, “This is not what we need on Capitol Hill.”

…Chuck Tingle, the pseudonym of an author of comically absurd erotica, is perhaps the most well-known creator of monster porn, including about 10 books featuring encounters with Sasquatch. Reached via email, Tingle said he understands why Bigfoot monsters are so attractive as romantic heroes: “They are natural outdoorsmen .?.?. which I think is nice, and, even though it seems like they could have a bad-boy way, they are actually very kind.” He imagines his readers think, “Wow, he could protect me in a big fight, and he could also take me on a walk in nature and show me which are the best plants to kiss or to eat in a stew.”

“Such stories, he said, “prove love is real for all.”

(13) A FUTURE TO AVOID. Ian Allen’s opinion piece “Inside the World of Racist Science Fiction” in the New York Times says “To understand why white supremacists back the president, we have to understand the books that define their worldview.” Andrew Porter sent the link with a note, “The article has a horrible title, bound to sow confusion. Absolutely nothing at all to do with professionally published science fiction, or SF fandom.” Just the same, I’m surprised I  never heard of any of these authors before.

Two years later — after Richard Spencer, after Charlottesville — the public has heard a lot about white supremacist culture. But I’d argue that we haven’t quite heard enough. To understand their ideologies and why they support this president so strongly, we need to examine their literature…..

Most of the books are self-published. Others are distributed by small, activist imprints or the publishing arms of white nationalist organizations. They are sold online, at gun shows or person to person. This scattershot distribution system makes it hard to track sales, but the more popular titles are estimated to have sold hundreds of thousands of copies. I acquired some out-of-print titles from rare book dealers.
They are dog-eared, annotated and often inscribed.

… White supremacists seem convinced that the novels’ “white genocide” is coming to life, and are petitioning Mr. Trump for help. This past spring, Andrew Anglin, the deeply sinister and darkly clever force behind Daily Stormer, the most Millennial-y neo-Nazi site on the web, started to spread the news of a “migrant caravan” that was moving through Central America, toward the United States-Mexico border. It was a protest march, organized by the Central American pro-immigration activist group Pueblo Sin Fronteras. The march has taken place every year since 2010 without ever getting much traction in the press.

But Mr. Anglin saw an opportunity in the implication of a literal enactment of [Jean Raspail’s 1973 novel] “The Camp of the Saints.” He rallied his troll army to petition Mr. Trump to use the word “caravans” publicly, and on April 1, he did. In fact, he and Vice President Mike Pence used the word multiple times, then issued an order to send the National Guard to the border. The story dominated the news cycle for days, and Mr. Anglin took a well-deserved victory lap, bragging that “the media was not talking about this, only the alt-right was, and Trump is posting about it — so he does hear us.”

…It is unlikely that Mr. Trump has read any of these books. But members of his staff undoubtedly have. His former aide Steve Bannon is a fan of “The Camp of the Saints” and refers to it often — in knowing, offhand ways that betray both his familiarity with racist literature and his awareness of his target audience’s reading habits. Another administration official, Julie Kirchner, was named ombudsman at the Customs and Border Protection after spending 10 years as the executive director of the Federation for American Immigration Reform. That organization, which Southern Poverty Law Center has designated a hate group, was founded by John Tanton, who runs The Social Contract Press, which is the current publisher of “The Camp of the Saints.”

The point is not that there is a direct line between, say, “The Turner Diaries” and the Oval Office. Rather, it’s that the tropes that define the Trump administration’s rhetoric and policies — apocalyptic xenophobia, anti-Semitic conspiracies, racist fear-mongering — are also the tropes that define white-supremacist literature.

(14) EMISSION QUITE POSSIBLE. James Corden looks like he might lose it before they even get him on the plane —

83 thoughts on “Pixel Scroll 7/30/18 There Have Been Rumors About This Strange Scroll, Frightening Rumors About Hapennings Way Beyond The Laws of Nature”