(1) AVENGERS REASSEMBLE. The Society of Illustrators in New York will display “The Art of The Avengers and Other Heroes” from July 5 through October 20. 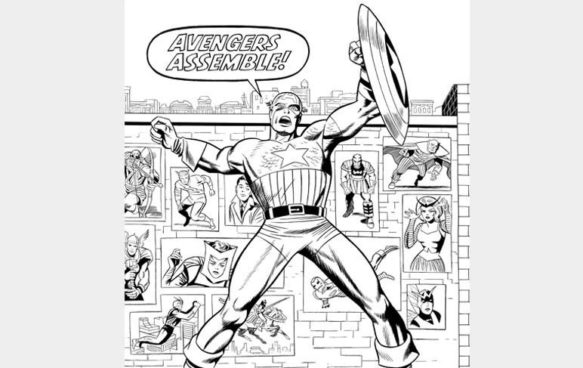 The Museum of Illustration at the Society of Illustrators is pleased to present an exhibition of original artwork showcasing characters from the Marvel Universe featuring the Avengers and other heroes. Artists include John Buscema, John Cassaday, Don Heck, Joe Jusko, Jack Kirby, George Perez, John Romita, Marie Severin, Walt Simonson, Barry Windsor Smith, Jim Steranko, Herbe Trimpe, and others, on display from July 5th through October 20, 2018.

(2) B&N EXEC GONE, BUT WHY? On July 3, Barnes and Noble announced it had fired CEO Demos Parneros for unspecified policy violations, adding that he would not receive any severance package. Publisher’s Weekly has the story.

In a brief statement released late Tuesday afternoon, the retailer said CEO Demos Parneros was terminated for “violations of the Company’s policies.” While not saying what policies Parneros violated, B&N said his termination “is not due to any disagreement with the Company regarding its financial reporting, policies, or practices or any potential fraud relating thereto.” In addition to being fired immediately, Parneros will not receive any severance, B&N said. B&N said Parneros’s removal was undertaken by its board of directors, who were advised by the law firm Paul, Weiss, Rifkind, Wharton & Garrison LLP.

(3) CAUTION, I BRAKE FOR SINGULARITIES. When Daniel P. Dern read that “SpaceX delivers AI robot, ice cream, mice to space station” he immediately thought, “Boy, that sounds like a ‘what could possibly go wrong?’ tv episode waiting to happen…”

The International Space Station got its first robot with artificial intelligence Monday, along with some berries, ice cream and identical brown mice.

The nearly 6,000-pound (2,700-kilogram) delivery includes the round robot Cimon, pronounced Simon. Slightly bigger than a basketball, the AI robot from the German Space Agency is meant to assist German astronaut Alexander Gerst with science experiments. Cimon’s brain will constantly be updated by IBM so its intelligence — and role — keep growing.

(4) SMOFS ON THE AIR.  Bids for future Westercons, Worldcons, and NASFiCs gave presentations and answered questions at Westercon 71 in Denver on July 5.

Kevin Standlee sent a link to the YouTube playlist of videos where you can watch the appearances of representatives from the SeaTac in 2020 Westercon, Utah in 2019 NASFiC, New Zealand in 2020 Worldcon, and DC in 2021 Worldcon bids.

My deep and personal congratulations to all of the winners and all of the nominees. The SFPA thanks everyone who nominated these poets and those who took the time to vote this year. Every year the awards are filled with great excitement, even as it is often deeply challenging to choose the best poem among so many styles and talented voices from around the world.

We’re looking forward to many more decades ahead of our members celebrating profound possibility, inquiry and imagination through verse.

First established in 1978, the Rhysling Award is now in its 40th year. Science Fiction fans may recognize the name. The Rhyslings were named for the blind poet Rhysling in Robert A. Heinlein’s short story “The Green Hills of Earth.” Rhysling’s skills were said to rival Rudyard Kipling’s. In real life, Apollo 15 astronauts named a crater near their landing site “Rhysling,” which has since become its official name.

The Rhysling Awards will be formally presented at DiversiCon 26 on Saturday, July 28th at 3:00pm in St. Paul (Bandana Square Best Western) by SFPA President, Bryan Thao Worra and other members of the SFPA executive committee. All members of the SF community are welcome to attend the ceremony. For scheduling at updates, visit www.diversicon.org.

(6) CALLING DESMOND MORRIS. How did Bambi’s distant ancestors bite the dust? Ars Technica turns to the professionals for an answer: “Archaeologists armed with spears demonstrate how Neanderthals hunted”.

At the Neumark-Nord site in Germany, Neanderthals 120,000 years ago hunted along the shores of a lake surrounded by dense forest. It’s a tough environment to make a living in, even for modern hunter-gatherers.  Here, archaeologists found two textbook examples of hunting-spear trauma. A fallow deer vertebra bore a circular wound from what Gaudzinski-Windheuser and her colleagues described as “a well-placed lethal injury” to the deer’s neck, not far from the trachea—probably from a spear thrust.

A pelvic bone from another fallow deer had a circular hole punched through the thinnest part of the bone, toward the front and close to the spine. The bone hadn’t begun to heal, so the injury, although likely not fatal in its own right, probably happened in the moments before death.

In micro-CT images, Gaudzinski-Windheuser and her colleagues could see that the wound had a tapered shape, wider on the outer face of the bone where the spear had entered. This pushed bone fragments inward, but things were narrower on the inner surface where the spear tip had come out the other side and pushed bone fragments outward. Such a clear injury is a rare find, and it offered Gaudzinski-Windheuser and her colleagues a chance to analyze Neanderthal hunting methods in detail.

(7) AND HAVING WRIT, MOVES ON. Someone corrected this blue plaque in Cambridge.

(9) FLIPSIDE. At Galactic Journey The Traveler fills in some missing info about his friend the Australian computer: “[July 4, 1963] Down Under to the Worlds of Men (Woomera, Part 2)”.

A few months ago I wrote about my friend Mary Whitehead, who works as an Experimental Officer in Australia. She recently wrote me back with some corrections, that I will pass on to you, in order not to mar the historical record.

For example, I said that Mary lived at Woomera, which was not the case. I was conflating the rocket testing range with the place where most of the computing work got done. She actually lives near the Weapons Research Establishment (WRE), which is located in Salisbury, a small town about 15 miles north of the big city of Adelaide. Woomera Rocket Range is in the isolated outback another 300 miles north of that.

In 1949, Mary, who studied mathematics in college, got a job in the Bomb Ballistics Section of the WRE. At that time, Mary was the only professional woman at Salisbury. Her first work was to lead a team of female Computers. At first, they used mechanical calculators like the noisy Friden’s and then Marchant’s like we used at Los Alamos Scientific Laboratory.

(10) HE’S MAD. In “A new editor. A new home. But Mad magazine still takes sharp aim at Trump and Roseanne”, the Washington Post’s Michael Cavna interviews MAD editor Bill Morrison, formerly with Bongo Comics, about how he is keeping his magazine fresh and topical after it moved to Los Angeles last year.

“We wanted to come up with a ‘summer fun’ cover and looked to things like beach parties, county fairs and amusement arcades for inspiration,” Morrison says of the cover illustrated by Mark Fredrickson. “Art director Suzy Hutchinson thought an image of [Mad mascot] Alfred playing Whac-A-Mole would be fun, and mocked up a surreal cover of Alfred whacking mini-versions of himself.

“Then,” the editor says, “we turned on the news and decided that taking a whack at some notorious celebrities would be not only fun, but therapeutic.”

Terry Gilliam says the legal battle over the rights to The Man Who Killed Don Quixote will not prevent the film’s long-awaited release.

Nearly a quarter of a century in the making, the film that premiered at Cannes and screened out of competition Wednesday at the Karlovy Vary Film Festival in the Czech Republic, has been dogged with challenges worthy of Cervante’s noble hero.

After false starts and many rewrites, ex-Monty Python member Gilliam finally completed the film only for a legal dispute with a now former Portuguese producer Paolo Branco to threaten to derail it.

Branco’s threats were sufficient for Amazon to pull out of a deal that would have ensured a 90-day cinematic release in the U.S. before it was available for streaming. Even Cannes chief Jerome Paillard was rumored to have had the jitters before its festival screening in May.

But that decision, Karlovy Vary’s screening and an upcoming competition screening at the Munich film festival appear to have strengthened the French distributors Kinology’s hand, despite a Paris court ruling last month granting the film’s rights to Branco.

“It is about to be released broadly in Holland and Belgium,” Gilliam told The Hollywood Reporter on Wednesday. “I think Cannes changed things. Paolo just went too far – ‘I will tell the festival not to show it’… It seems things are floating along nicely, although he did scare a lot of people away at one point.”

(12) NOT CANALS, BUT… From Nature: “Mars’s river valleys whisper of a rainy past”.

Fast-flowing waterways on ancient Mars carved river valleys much like those on modern Earth.

Although Mars is cold and dry today, channels on its surface look as if running water shaped them, leading researchers to think the planet was warm and wet in the past. But scientists have struggled to determine whether that water fell from the sky as rain or seeped upward from the ground.

To discern the water’s source, Hansjoerg Seybold at the Swiss Federal Institute of Technology (ETH) Zurich and his colleagues analysed the geometry of Martian valley channels. The channels branch off at relatively narrow angles, as do waterways in arid landscapes on Earth, such as the US Southwest. More-humid landscapes with a lot of groundwater — the Amazon rainforest, for example — host river channels that branch at wider angles.

(13) BELATED BIRTHDAY. Born on the Fourth of July – no, not George M. Cohan. ScreenRant celebrated with its post: “Today is MCU Captain America’s 100th Birthday”.

We know Cap’s exact date of birth thanks to a scene early on in Captain America: The First Avenger, when pre-serum Steve Rogers attempts (not for the first time) to sign up for the army. The doctor dismisses him due to his long list of ailments, and in the process gives the audience a look at his medical records, which include his date of birth. Naturally, he was born on Independence Day.

The comic book version of Captain America, meanwhile, is actually 101 years old, having been born on July 4, 1917. His birth date is often incorrectly cited as being July 4, 1920, since that’s the date given on his Wikipedia page. However, The Adventures of Captain America #1 (the source for Wikipedia’s claim) states that he was born in 1917.

If you squint, the image above bears a pretty strong resemblance to what you might see at a July 4 fireworks display.

But it’s actually, dare we say, far cooler. Or hotter: The image captured by the Hubble Space Telescope is a cluster of “huge, hot” stars called NGC 3603, about 20,000 light years away in the constellation Carina.

The glittery image was captured in 2009, and NASA posted it on its website on the eve of today’s Independence Day celebrations. The swirling purple clouds of gas and dust, it says, are the “raw material for new star formation.”

(15) DISSERTATION DEFENDER. Congratulations to Shaun Duke, of Skiffy and Fanty, who earned his Doctorate today.

What up? I'm a Doctor now and y'all can't do a thing about it. pic.twitter.com/4TLAwGKVTe