High dudgeon, low dudgeon, and dudgeon in between, all in today’s Scroll.

(1) Liz Lutgendorff tells New Statesman readers that the books on NPR’s list of 100 best fantasy and sci-fi novels aren’t all that.

When it comes to the best of anything, what do you expect? If it’s science fiction and fantasy novels you want epic adventures and getting out of impossible situations. But what you often get is barely disguised sexism and inability to imagine any world where women are involved in the derring-do.

At the end of 2013, after a year of reading very little, I decided to embark on a challenge: read all the books I hadn’t yet read on NPR’s list of 100 best sci-fi and fantasy novels. Nostalgia permeates the list. Of the books I read, there were more books published before 1960 than after 2000. The vast majority were published in the 1970s and 1980s. There were also many sci-fi masterworks or what were groundbreaking novels. However, groundbreaking 30, 40, 50 or 100 years ago can now seem horribly out of date and shockingly offensive….

In contrast to the male-dominated stories, there’s The Doomsday Book, where a woman named Kivrin is put into all sorts of danger. She’s stuck in 14th century England, with her meticulously crafted cover blown by illness, and only her knowledge, strength and intelligence to help her survive.

Why, that’s one of my favorite books. All is forgiven — what good taste you have, Liz!

(2) The world’s first science fiction convention in Leeds is chronicled by David Wildman at Tiny Tickle. (Maybe File 770 is not such a bad title!) 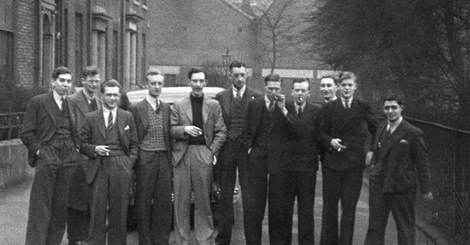 Attendees at the 1937 Leeds convention.

So to some, it may actually be more of a surprise to learn that the first ever science fiction convention didn’t actually take place until 1937, and they may be less surprised to find that it was based in Leeds, and not the likes of London or some city in the US.

And so is the controversy about whether it really was the first.

But was it really the first science fiction convention? – The Philadelphia claim

Unfortunately, the title to the first science fiction convention in the world is marred somewhat by a claim laid by an event held in Philadelphia in 1936 – just one year before Leeds’ own.

Indeed, the only question the article leaves unanswered is why it includes a ginormous photo of Captain Kirk clutching Yeoman Rand?

The cast of the new CW musical comedy “Crazy Ex-Girlfriend” are ready to take the Internet by storm with a tap-off.

In a video that was released Friday, series stars Rachel Bloom, Donna Lynne Champlin and Vincent Rodriguez III (and yes, Pete Gardner too), show off their hoofing skills and dare fellow musical theater-loving stars of shows like “Jane the Virgin,” “The Flash,” “Supergirl” and “Madam Secretary” to record themselves doing the same.

The CW is donating to nonprofit fundraising and grant-making organization Broadway Cares/Equity Fights AIDS in honor of this video — and will continue to donate for every new video made.

#JaneTheVirgin has been #TAPPED by the #CrazyExGirlfriend cast in a tap dance challenge! Will they accept?https://t.co/YWZhbyfen3

(4) Crystal Huff of the Helsinki bid tells about her formal fannish adoption. 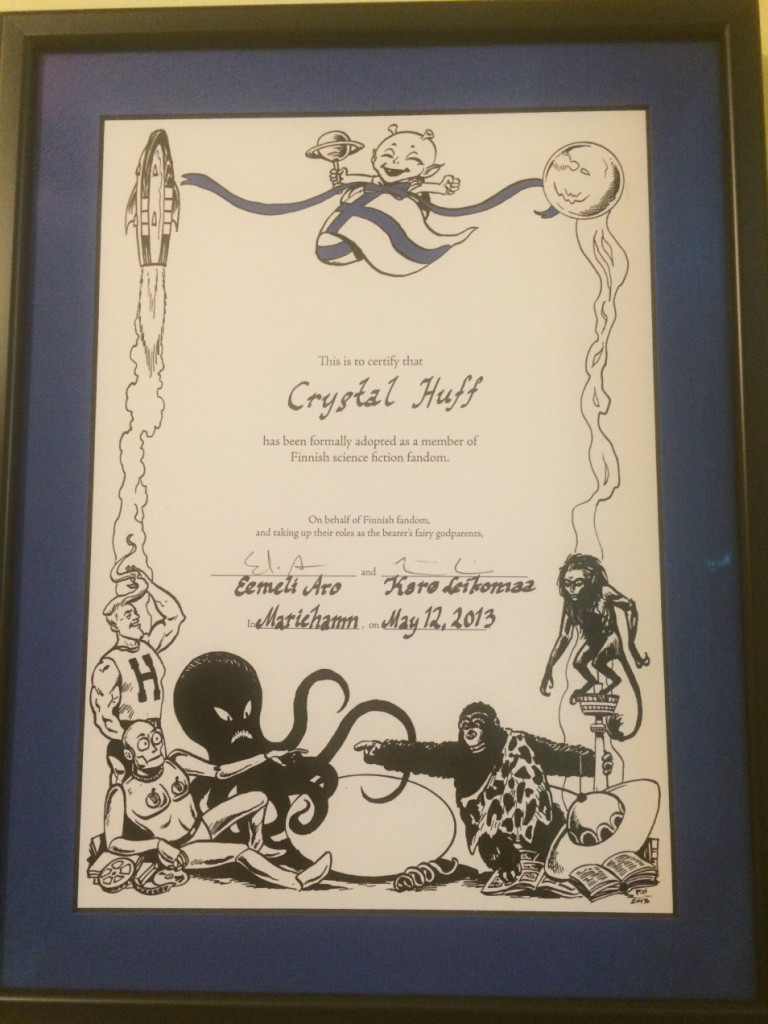 No, really! That happened!

I and a couple of others were called into the bar (the major social space of the con after the function rooms were closed down). There was some laughter, and then, along with three others, I was declared officially an adopted Finnish fan. I have framed the adoption certificate they presented to me, which was drawn by my friend Petri Hiltunen and features several Finnish SFF characters around the border.

I am apparently the alien baby at the top, wrapped in a Finnish flag. I adore this piece of paper. It hangs proudly in my dining room.

I didn’t have to learn any Finnish in order to be accepted into this group, although I have tried to retain basic greetings and courtesies such as “kiitos” and “ole hyvää” (aka “thank you” and “you’re welcome”). I am having great difficulty learning how to roll my R’s, I must say.

(5) Rachael Acks deals with Brad R. Torgersen’s latest gulag quote by inviting him to “fuck all the way off”.

All I have to say is this: how dare you, Brad. After you helped garner John C. Wright, a man who not-at-all-coyly talks about gay bashing as an “instinctive reaction” to “fags” a record number of nominations, how dare you project your paranoid fantasies of people wanting to harm you on us. How dare you wrap yourself in a blanket of imagined persecution when to this day transpeople are being murdered for simply existing. How dare you whip up false fears about people wanting you to die over a fucking literary award when right now black men and women are being killed by the police for simply existing. How dare you imagine yourself a second-class citizen when underprivileged women and girls are suffering because their male-run government has decided they have no right to bodily autonomy.

How dare you talk about people being shipped to frozen gulags when, today, gay and trans youth are still subjected to the very sort of reeducation you claim we want.

Real people are harmed every day by the positions those with whom you associate yourself espouse. Real people, who experience real pain, and real suffering, and all too often real death. The number of your faction that has been sent off to a reeducation camp is zero, and it will remain zero.

Rumors are that Santa Claus left a comment and, believe me, it wasn’t “Ho, ho, ho.”

In just over a week the Hugos will be done. But it won’t be over. This shit storm we’ve been living through will go on. It’ll probably get worse. I’m sick to death of it and you probably are too.

There’s no end in sight because both sides are telling stories — personal, important, urgent stories, but stories nonetheless, told with apocalyptic rhetoric and elevated language, using energy that would be much better spent on fiction.

It’s not surprising. We are fiction writers. We are very good at making stirring narratives out of chaos.

But there’s the problem. These stories aren’t true. They’re important but not true….

Many times people have claimed Vox Day explicitly said he wants to destroy the Hugos. In those words. But as I searched File 770 this is what I found Vox Day had said in comments contradicting those claims:

I didn’t have time to scour Vox Popoli to see if things changed later. Feel free to let me know what you find. But it’s possible Robson is right – that is the narrartive, and it may be inaccurate.

[Thanks to John King Tarpinian, David Doering and Laura Resnick for some of these stories. Title credit belongs to File 770 contributing editor of the day Cubist.]