The future is almost here, in today’s Scroll.

(1) SFWA will be selling fame at Sasquan.

If you've ever wanted to be Tuckerized, the SFWA auction at Sasquan is going to have some amazing opportunities.

(2) It’s not the accuracy that counts, it’s mainly Jim C. Hines having the idea to cast his thoughts in the form of 10 Hugo Predictions that’s genius.

Congratulations to the winners, including those who were on the puppy slates. While most of the puppy nominees failed to take home a rocket, I imagine there will be at least three. I’m predicting one will go to my own editor, Sheila Gilbert, who’s made the ballot on her own in previous years, and is (in my biased opinion) utterly deserving of the award. I’m not as sure who the second will be, but I’m guessing Kary English in the short story category. One of the movies on the puppy ballots will also win. Finally, I think there’s a good shot of either Resnick or Brozek taking home a short-form editor Hugo.

No Award didn’t sweep the ballot like some people hoped/feared. It did take the Novella category, though. I think it will probably take Best Related Work as well.

(3) Jason Sanford seems to be expecting a much stronger showing by No Award than Hines, judging by this eulogy for the Puppies.

The problem for the puppies is they miscalculated about the outrage arising from their actions. As record numbers of people turned out to vote in the Hugos, the pups realized they’d overreached. It’s one thing to organize block voting on a preliminary ballot which few people actually take part in. But not being humiliated by a vote of “No Award” when thousands of people are taking part — that’s a much harder accomplishment.

(4) Alex Shvartsman tells how Unidentified Funny Objects got started on the SFWA Blog.

When I thought of the concept of a non-themed humor anthology, I was certain someone must have produced one before. But my research showed that no such thing existed. There were plenty of humor anthologies available: Chicks in Chainmail and Deals with the Devil to name a few, but those were all themed projects. No one seemed to be creating anthologies that would offer a wide variety of humorous voices and styles. It was the sort of book I would want to read, and I was confident many others would like it too. Thus, Unidentified Funny Objects and its parent micro-press, UFO Publishing, were born.

(5) Brad R. Torgersen has a horseshoe theory. No, I’m not cleaning up my language. His theory is completely horseshoe.

At one end of the horseshoe you have the “pulpy” stuff: visceral, action-packed, perhaps even hard-boiled? Emphasis on “doing” versus thinking.

At the other end you have the “literary” stuff: cerebral, theme-intensive, and sometimes abstract. Emphasis on “thinking” versus doing.

There are audiences waiting for you — the author — at both ends of the horseshoe. But there is nothing to say that you can’t combine both. Too much action and not enough contemplation, and your story becomes the tale of the idiot: full of sound and fury, signifying nothing. Too much contemplation and not enough action, and your story becomes the prototypical MFA piece: your main character does very little, thinks about a great deal, and again your story signifies nothing.

In order to hit the “sweet spot” you need to aim for the zone at the top of the horseshoe.

(6) A lawyer defending his client in a lawsuit is demanding trial by combat:

Richard Luthmann, a Staten Island attorney, is demanding that one of the plaintiffs (or their “champion”) in the suit against him face him in a literal battle to the death unless the case is dismissed. He claims that the practice has not been outlawed in the U.S. or New York state and is suggesting it to point out the absurdity of the plaintiffs’ allegations.

He’s gotten the idea from Game of Thrones – although Mack Reynolds wrote a series of stories in the 1960s for Analog about a mercenary who participated in settling corporate disputes by combat.

Here’s the lawyer’s argument why trial by combat can be permitted:

A Staten Island lawyer with a penchant for bowties and closely-cut beards is apparently channeling his inner “Games of Thrones” by asking a judge to sanction a trial by combat to resolve a civil suit in which he’s accused of helping a client commit fraud.

…Over the course of 10 pages, Luthmann discusses the history of trial by combat from Middle-Age England to the founding of the Thirteen Colonies. (Fun fact: One British bishop in 1276 paid a champion an annual retainer fee, with additional stipends and expenses for each fight. Luthmann doesn’t say how much.)

More to the point, an attempt to abolish the practice in the Thirteen Colonies was blocked by Parliament in 1774, nor was it subsequently banned by the Constitution in the United States or by the state of New York, Luthmann contends.

(7) This day in history, courtesy of Phil Nichols and the Center for Ray Bradbury Studies’ Facebook page.

Fifty-eight years ago today, Oliver Hardy died, bringing an end to the decades-long comedy partnership of Laurel and Hardy.

Ray Bradbury adored Laurel and Hardy. When he went to Ireland in the 1950s to write the screenplay for Moby Dick with John Huston, he discovered that they were making a personal appearance in Dublin, so he went to see them on stage.

Later, he wrote three short stories inspired by the duo. “The Laurel and Hardy Love Affair” is probably the best of these, and can be found in Ray’s book The Toynbee Convector. “Another Fine Mess” is in his book Quicker Than The Eye. “The Laurel and Hardy Alpha Centauri Farewell Tour” is in One More For The Road. 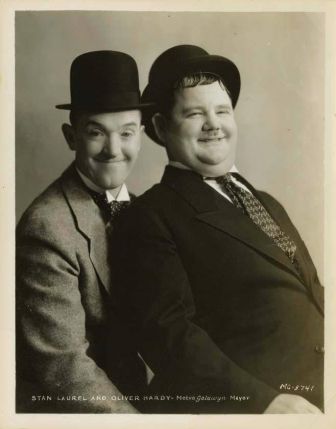 (8) Major League Baseball is getting more eyeballs on its website by speculating “What would the Marvel Cinematic University’s baseball time look like?”

Hear us out. With a slick glove and an army of ants ensuring that any grounder would hop into his grasp for an easy out, Ant-Man would also offer surprising pop for the position. Plus, he would enrage pitchers with his ability to get on base thanks to his Pym Particles allowing his strike zone to shrink 12.7x its normal size, rendering him impossible to strike out.

From Ant-Man to Iron Man, these are Earth’s Mightiest Ballplayers.

(9) The Book Wars’ “Top Ten Tuesday” recommendations amount to around 50 titles, lots of YA and fantasy – and also, the reason I’m mentioning the post, one lists includes The Company They Keep: C.S. Lewis and J.R.R. Tolkien as Writers in Community by Diana Pavlac Glyer.

[Thanks to Morris Keesan, John King Tarpinian and Martin Morse Wooster for some of these stories. Title credit goes to File 770 contributing editor of the day Richard Brandt .]