(1) MOON EXHIBITION IN DENMARK. Louisiana, the largest gallery of Modern Art in the Nordic countries, is holding an exhibition about The Moon from September 13-January 20. The themes are Moonlight, Selenography, The Moon of Myth, The Moon Landing, The Colonization of Space and Deep Time. 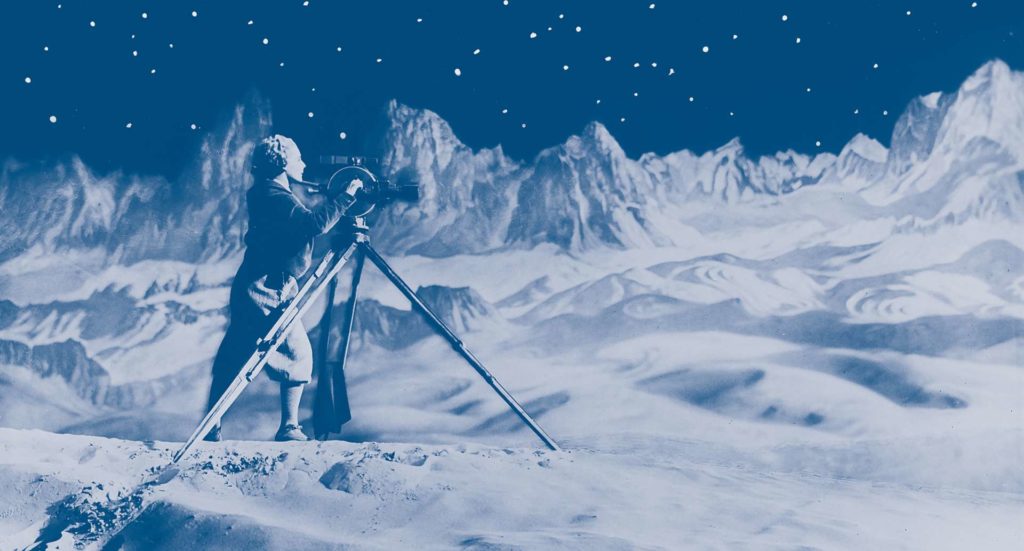 From painting to virtual reality, superstition to science, myths to missions, fantasies to space colonies, join Louisiana on a trip to the Moon – into space and into ourselves. ARTnews has already called THE MOON the most intriguing show of the season.

This large-scale exhibition at Louisiana highlights the role, the importance and the fascinating power of the Moon. The exhibition presents more than 200 works and objects—and show how the round white disc is reflected in our art and cultural history. From Galileo’s moon map to Norman Foster’s plans for 3D-printed moon bases.

The exhibition mixes art, film, music, literature, architecture, cultural history, design and natural science into a vibrant and diverse portrait of our closest neighbor in the sky. We encounter the Moon as a fundamental symbol and as a goal of romantic and artistic longings, scientific inquiry, existential issues—and the urge for political expansion.

With this exhibition, Louisiana commemorates the imminent 50th anniversary of man’s first steps on the Moon and also calls attention to a strong and renewed interest in the Moon both in art and as a springboard for a new Space Race with all its strategic and economic implications.

It’s been said that the past is a foreign country, and I’ve come to believe that the future is too. I’d just never been so immersed in it before. In Beijing this summer, I read about two thousand pages of work by Cixin Liu, possibly the world’s most important living science-fiction author and certainly among humanity’s most imaginative prognosticators. (A recent London Review of Books piece called his Three-Body trilogy, published in English in 2016, “one of the most ambitious works of science fiction ever written.”) Like life in Beijing, the experience was magnificent and exhausting and thrilling and flawed. Science fiction might be the genre best suited to Chinese society today; the breakneck pace of change becomes a constant, and to live in the present is to anticipate what is to come. When we told our acquaintance that we’d like to return next summer, she responded as many of our Chinese friends did: “You might not recognize it here.”

The fundraising effort behind a proposed 12-foot-tall statue honoring Waukegan native Ray Bradbury is in its final stretch, according to a library spokeswoman.

The group behind the campaign, now an official part of the Waukegan Public Library Foundation, has raised $107,000 of the $125,000 needed through a mix of individual, corporate and nonprofit donations and pledges, said Amanda Civitello, the library’s spokeswoman.

…The proposed 12-foot-tall, stainless steel statue, designed by artist Zachary Oxman, was inspired by Bradbury’s poem “If Only We Had Taller Been” and would show Bradbury astride a rocket ship, waving a book. 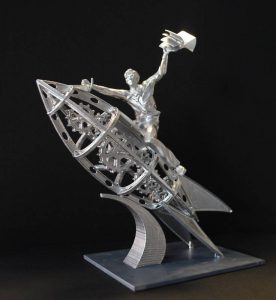 (4) INCURABLY VIRAL. Chuck Wendig explains how this movie got started: “You Might Be The Killer: The… Movie?”

So maybe you remember in the halcyon salad days of Summer 2017, one mister Sam Sykes and one mister, uhh, well, me, we got on The Twitters and we did an improvised horror story, kind of a riff on a slasher film, but in Twitter format. Shitposting, the kids call it!

And when a thing goes viral, it takes on a weird life of its own, meaning, we started fielding offers to make our Twitter thread into Something. Movies, YouTube series, cartoons — but at the end of the day, we had two guys, Craig Engler and Tom Vitale, say they had a vision for it, and it was a movie, and we said, HELL YEAH. Because, holy shit, a snarky slasher film from our tweets? Sign us up…

You Might Be the Killer will have its world premiere at Fantastic Fest in Austin September 21.

And there’s what you could call a companion Twitter thread that got started by Myke Cole – begins here.

The Contracts Committee has learned of recent cases in which a publisher did not routinely send authors a copy of the final contract signed by both the author and publisher.  The authors had made significant amendments to their contracts which the publisher ignored, publishing material in a format which the authors had crossed out in the contract they signed.  Our understanding is that the books were thus published without a fully executed contract.

…To many of us, agents are mythic beasts who guard the doors to fame, fortune and the realisation of our dreams. There are a thousand websites out there with advice, tips and tricks on how to discover an agent and, hopefully, entice them enough to take you on as client.

Should you wish to, on those websites, you can find information on the publishing industry, what happens when you’ve snagged an agent, how to tread the minefield of getting your book out there and then the hard bit, getting people to read it.

But better surely is to ask an agent yourself?

Which isn’t always an easy thing to do. Especially if your introverted Britishness prevents you even putting digit to keyboard… Well, fear no more, the struggle is over. We have, through the kindness of four world class agents of impeccable taste, organised a week in which you can ask the questions and get your answers.

(10) NEXT GEN. Netflix picks up Chinese-Canadian animated genre film at Cannes — SYFY Wire has the story: “Next Gen: A Chinese meme, ghosting producer, and a lucky break led to Netflix’s biggest animated film”

The international sales market at Cannes generally runs on two parallel tracks: Big names make splashy deals for high-profile movies, while relatively unknown production companies hock not-so-high-profile projects to international distributors hungry for programming. So it created quite the stir and raised more than a few eyebrows online when, at this year’s festival, Netflix plunked down $30 million for Next Gen, a Chinese-Canadian animated sci-fi film from a pair of first-time feature directors and a studio that had never made a movie before.

…It began, as do seemingly all worthy modern stories, with a meme. Back in 2008, an artist in China named Wang Nima created his own riff on the American “Rage Comic,” a Reddit-grown comic form that couples consciously janky art and the hair-trigger anger inherent to the internet. The style, which became known as “Baozou,” was instantly popular in China, and Wang started up a site called BaozouManhua.com to build on his creation. Fast forward five years and the Baozou site had become a digital empire, with stand-up comedy, web series, and user-generated content, sort of a Chinese version of Funny Or Die.

(11) CRAIG MILLER. The latest Chatting With Sherri podcast is “with Producer; Craig Miller”.

Craig Miller is a well-known and respected writer/producer with over 300 credits but he began his Hollywood career as a specialist in motion picture publicity, promotion, and licensing. He started his marketing career fresh out of college, working for George Lucas on a science fiction movie nobody thought would break even: Star Wars. He was Producer-for-Lucasfilm on episodes of Sesame Street guest starring R2-D2 and C-3PO, the Star Wars robots, and other shows and projects.

Miller set up as an independent publicity consultant, working with most of the major studios and many independent companies through his company, Con Artists, and with creative forces of nature such as Stephen Spielberg and Jim Henson.  Films he’s worked on include The Dark Crystal, The Muppets Take Manhattan, Excalibur, Superman II, Altered States, Splash, The Black Cauldron, Real Genius, and dozens of others.

I heard they're looking for a new Superman. I just want to put it out there that I coincidentally wear glasses and red underwear.

Comic Con Africa will see the best of the best in the industry of superhero comics to gaming, and fans will get an opportunity to see some of their favourite international stars in person.

The build-up to the three-day event has been overwhelming for organisers, who did not expect a sold-out response from fans.

(14) BEFORE THERE WAS TINTIN. Murals Hergé did as an art student are crumbling: “Tintin and the vanishing murals: Brussels races to save art”.

He’s one of the best-known artists of the 20th Century but, before The Adventures of Tintin, the Belgian artist Hergé created art of a different kind – murals at the Brussels school where he once studied.

In the early 1920s Hergé, then a 15-year-old Georges Remi, was a scout and student at Institut St Boniface, in the Ixelles area of Brussels.

He adorned the walls of the old scout HQ with lovingly rendered art showing scouts and Native American Indians, as well as a map of Belgium.

But now the small garage is in disuse, the walls are in a poor state and many of his drawings have crumbled away.

(15) UNWINDING A MYSTERY. Chip Hitchcock asks, “Did this inspire de Camp’s The Clocks of Iraz?”: “Why Edinburgh’s clock is never on time”.

Arrive in Edinburgh on any given day and there are certain things you can guarantee. The fairy-tale Gothic of the royal castle, built on an extinct volcanic plug. The medieval riddle of alleys and lanes. The majesty of the churchyards and macabre spires set against a barb of basalt crags, all as if created by a mad god.

Yet there is one other given in the Scottish capital, and it is the hallmark of Princes Street, the city’s main thoroughfare that runs east to west joining Leith to the West End. The time on the turret clock atop The Balmoral Hotel is always wrong. By three minutes, to be exact….

“We look after 5,000 different clock towers around the world, and to say The Balmoral’s is peculiar is a massive understatement,” [maintainer Smith of Derby]’s Tony Charlesworth told me. “It’s hard to believe, but it’s the only one we’re paid to keep wrong.”

You can always tell when Sting has been in to return his books. pic.twitter.com/KmEEWfWsLE

In Marvel Rising: Secret Warriors, powered teens Ms. Marvel, Squirrel Girl, Quake, Patriot, America Chavez, and Inferno join forces as an unlikely, but formidable crew of aspiring heroes. When a threat no one could have expected bears down on the Marvel Universe, this ragtag, untrained band of teens have no choice but to rise together and prove to the world that sometimes the difference between a “hero” and “misfit” is just in the name.