(1) EXTRAPOLATION. At WIRED, The Geeks Guide to the Galaxy podcast asks Peter F. Hamilton “How Would Teleportation Change Society?”

Hamilton envisions a future in which teleportation portals are used for garbage disposal, irrigation, and carbon sequestration, and in which the now-useless bridges and highways have been converted into parks and shopping centers. He also predicts that cheap teleportation would spell the end of the hotel business.

“If it takes two minutes to walk from where I am [in England] to America, what do I need a hotel for?” he says. “There are still fabulous resorts and places like that, but the idea of a businessman needing a hotel for the night? No, that’s gone.”

Teleportation might also allow humanity to easily explore the galaxy. Hamilton’s interstellar starships are propelled forward by exhaust channeled through a portal. “You have one part of the portal that you just drop into the sun, and the other half is the rocket engine on the starship,” he says. “No need for any antimatter or fusion or anything.”

(2) STAYIN’ ALIVE. Here’s somebody else who’s looking for work. We learn from The Late Late Show with James Corden that Predator is desperate for new acting roles:

With “The Predator” now out in theaters, the franchise’s famed antagonist, whose name is Howard, is ready for a new chapter. With new headshots and a positive attitude, Howard jumps into the Hollywood grind in search of the next great role.

(3) REMEMBER TO SQUEE. Edmund Schluessel wrote up “Fantasticon 2018 in Copenhagen”. (He wants you to know this event was distinct from the Fantasticon SF convention which took place in Indiana this same weekend.)

…The audience at Fantasticon was consistently among the nicest I’ve encountered. One of the program items I made a point of seeing on Saturday was a talk led by the dauphines of Swedisn and Danish fandom, Fia Karlsson and Sanna Bo Claummarch respectively, titled Come with me if you want to squee! whose thesis was, simply, there should be no guilty pleasures: we should feel free to enjoy what we enjoy, and break down barriers of “you can’t like this because you’re a girl, or boy, or too old, or to young” and so on.

And this is something we need to keep reminding ourselves of because those barriers are continually being reconstructed for us. Now that I am A Published Author people can read what I write in an “official” way; but part and parcel of that is that the publisher and Amazon will both try to quantify me like census takers because that’s as indivisible and fundamental a component of marketing books as carbon is a component of sugar, and we authors and fans are complicit too when we try to promote the work by putting it in a familiar context (“you like young adult romances with aliens, right?”). We owe it to ourselves as writers and fans to break down the barriers even as we take part in building them up through how we present our work.

(4) A SAGA OF THE MEXICANX INITIATIVE. Hector Gonzalez has posted two more entries in his account of  Worldcon 76.

I started thinking something showing my traditions as well as the new lessons I’ve learnt in the US. The choice was simple: gorditas, a Mexican specialty of stuffed fried masa dough. I opted for a smaller version of these, around the size of a mason jar mouth. There would be two versions, one for meat eaters, another one for vegans. The meat option would be filled with carnitas estilo Michoacan, using my grandmother’s recipe but adapting it to a modern technique called sous vide. With it you cook the food at a constant temperature to assure more tender and intense flavors. The vegan version would be vegan carnitas, made with mushrooms, using sous vide too.

Now, the science fiction angle. The easiest way would be playing with my specialty: salsas. I opted for making 7 salsas, each spicier than the previous one. The first one that came to my mind was Soylent Verde, because it was an easy pun. My dear Aussie friend Paul CZ came up with a couple of the other names: Picard de Gallo?—?Make It Salsa happened while eating BBQ, while Obi Juan Chipotle was sent over Messenger later that same day.

I though I had everything under wraps and the plan would go without a hitch. However, I tend to think on worst case scenarios when cooking. “If this fails, which is your plan B?” I started thinking about options. I was assured by Diane that I would get help in the kitchen but even with an extra pair of hands, catering for over 100 person could be daunting.

(5) A GOLDEN AGE. M M Owen, in ”Our Age of Horror” on Aeon, interviews Joe Hill, Ramsey Campbell, and Daid J Skal to discuss why horror remains so popular.  Plus he begins his piece by discussing Ray Bradbury’s 1955 story “The Next in Line.” which he thinks is one of the great horror stories of the 20th century.

Our present era is one in which the heart of culture is blowing hard upon a coal of fear, and the fascination is everywhere. By popular consent, horror has been experiencing what critics feel obliged to label a ‘golden age’. In terms of ticket sales, 2017 was the biggest year in the history of horror cinema, and in 2018, Hereditary and A Quiet Place have been record-breaking successes. In both the United States and the United Kingdom, sales of horror literature are up year over year – an uptick that industry folk partly attribute to the wild popularity of Netflix’s Stranger Things (2016-). And the success isn’t merely commercial. Traditionally a rather maligned genre, these days horror is basking in the glow of critical respectability. As The New York Times remarked this June, horror ‘has never been more bankable and celebrated than it is right now’.

As any historian of the genre will tell you, horror has had previous golden ages. Perhaps ours is just a random quirk of popular taste. But perhaps not. Perhaps we are intoxicated by horror today because the genre is serving a function that others aren’t. Can’t. Horror’s roots run deep, but they twist themselves into forms very modern. The imagination’s conversion of fear into art offers a dark and piercing mirror.

(9) TRUE CONFESSIONS. J.W. Ocker kicked off the Halloween season  by watching the 1983 Disney/Ray Bradbury flick Something Wicked This Way Comes. Oh, and by the way….

For whatever stupid, random twists that the universe throws at this planet to keep itself entertained, I happen to own the head of Will Halloway. Like, the actual physical prop. It’s from the scene where he and Jim are running from the carnival at night and come full stop at a small guillotine that beheads a version of Will right in front of them. The severed head prop was created by Rob Schiffer, a famous Disney make-up artist who was responsible for turning Jonathan Winters into a pumpkin in the Halloween Hall of Fame show and a dog into a monster in the original Tim Burton short Frankenweenie. He also worked on such properties as The Black Hole, TRON, and Escape to Witch Mountain, as well as movies for other production houses. I mean, he did the makeup on everything from The Wizard of Oz to Whatever Happened to Baby Jane?

(10) NPR AND COMICSGATE. NPR’s investigative reporting show Reveal devoted an episode to explaining #ComicsGate: “Never Meet Your (Super) Heroes”. Because of my bad hearing I haven’t listened myself, however, person who emailed me the link says a feature of the show is a Rolling Stone reporter interviewing Vox Day, publisher of the comics referenced in the following blurb —

There’s a new battlefield in the culture wars: comic books. The alt-right now has gotten in the business, led by a buxom, Confederate flag-waving superhero named Rebel and a white vigilante who turns immigrants over to ICE.

(11) DOLLARGATE. Whatever else #ComicsGate is, Vox Day and Jon Del Arroz hope it’s a revenue stream. However, one of Day’s moves has offended some people and made both VD and JDA objects of social media scorn. Castalia House apologist Bounding Into Comics tries to run interference for them in “Let’s Not Turn #Comicsgate into #Dramagate”.

With coordinated attacks coming from all sides, it’s more critical than ever that #Comicsgate members keep their eye on the prize and don’t turn into #dramaqueens who favor sniping and infighting over solidarity. Sadly, for those supporting this consumer revolt in the name of good comic books, and for the high profile figures within it, recent history may not be on our side.

On September 3rd, 2018, Alt-Hero publisher Vox Day announced his prospective Comicsgate imprint right here on Bounding Into Comics, and it would be an insult to diarrhea to say that the Comicsgate community understandably lost their crap in response. Whether Vox Day was trying to do something he deemed to be positive for the movement, or he was just trying to co-opt it a la Sad Puppies…or both, is mostly irrelevant; the fallout from his move was quite real, particularly when it came to author and occasional BIC contributor Jon Del Arroz.

Over the course of 24 hours, Del Arroz, whose Sci-Fi and comic book work are both published by Day’s imprints, was not only taken to task for his friendship with Day, but he would see some of his sociopolitical positions erroneously conflated with Day’s. When the accused makes it crystal clear that they disagree with someone else’s specific politics and yet they are still being taken to the woodshed for them, it’s a pretty clear case of reactionary outrage….

Teams of divers are painstakingly lifting an artificial reef made of tens of thousands of old car tyres from the seafloor south of France, after it was found to spread pollution from toxic chemicals.

The operation is costing well over a million euros ($1.1m; £898,000) and is part-funded by the tyre manufacturer Michelin as well as the French state.

The divers are supported by a boat with lifting equipment.

Fish had been avoiding the area.

(13) LEGO PORG. SYFY Wire has made note that you will soon be able to buy your own Porg; some assembly required (“LEGO just brought a life-size Porg to Earth”).

Yes, this is for real, and it’s one Porg that Chewie can’t slow-roast over a fire. 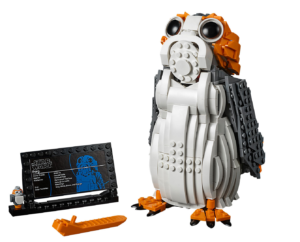 (14) DISNEY STREAMING. Variety has a report (“Loki, Scarlet Witch to Get TV Series on Disney Streaming Service”) that the as-yet unnamed Disney streaming service will have exclusive content from the Marvel Cinematic Universe.

Disney is enlisting Earth’s Mightiest Heroes as the company prepares to launch its upcoming streaming service. The entertainment giant is in early development on an ambitious plan for a number of limited series centered on popular characters from the Marvel Cinematic Universe. These series will likely include shows centered on Loki and the Scarlet Witch, along with other beloved superheroes who have yet to appear in their own standalone movies.

There’s an important distinction from other Marvel small screen efforts, however. The actors who portrayed these heroes and villains in the Avengers films and their spin-offs, such as Tom Hiddleston and Elizabeth Olsen, are expected to play them in the streaming shows. Moreover, though sources close to the production are staying mum on the cost of the programming, the budgets are expected to be hefty rivaling those of a major studio productions. Each series is expected to include six to eight episodes. Marvel Studios will produce the shows and Kevin Feige, the guru of all things MCU, is expected to take a hands-on role in their development.