Even though it started with a blood test at the Macmillan Centre, my birthday was all about Chris, and sushi and sake. It was all about my weight-loss making more clothes fit better. It was all about walking all over central London without worrying about having to find a place to sit. Well, until after I drank most of a small(-ish) bottle of sake. My back became a bit less tractable for a while but it had shaped up pretty well after the bus ride home.

(2) Europa SF has a great feature on the Tblisi, Georgia sf club “Fantasti” by Irakli Lomouri. 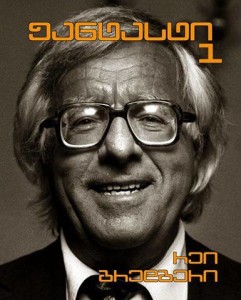 The first issue of “Fantasti“, The Georgian Science Fiction Magazine , is dedicated to Ray Bradbury.

Our SF and Fantasy Club “Fantasti” was officially registered in Tbilisi (Georgia) on March 18th, 2015, but its history began in August 2014, when I had a holiday – a free month – and lay down on the couch reading SF stories by means of my new tablet via internet. I love SF from my childhood, so I had to recall my favorite stories, and read many new ones – nearly 150.

I got so much pleasure, that I decided to offer it to others.

I wrote in a Facebook: Dear friends,  let’s create a SF and Fantasy Club and publish  a special dedicated magazine.

In Georgia SF is not popular, so I had no hope I could find real supporters of my idea, but fortunately I found them, so we met and started our club.

Since September 2014 we are having our biweekly meetings at my flat or in the House of Georgian Writers. In our club there are people of all ages, most of them write SF and fantasy themselves, so our club plays the role of literary studio, we read aloud our new stories and discuss them.

(3) Here’s something new to remember: the “t” in Voldemort is silent.

… but I'm pretty sure I'm the only person who pronounces it that way. https://t.co/HxhJ5XY5HP

(4) National Geographic has a big article about the discovery of a new species of human ancestor in a South African cave.

A trove of bones hidden deep within a South African cave represents a new species of human ancestor, scientists announced Thursday in the journal eLife. Homo naledi, as they call it, appears very primitive in some respects—it had a tiny brain, for instance, and apelike shoulders for climbing. But in other ways it looks remarkably like modern humans. When did it live? Where does it fit in the human family tree? And how did its bones get into the deepest hidden chamber of the cave—could such a primitive creature have been disposing of its dead intentionally?…

The same schizoid pattern was popping up at the other tables. A fully modern hand sported wackily curved fingers, fit for a creature climbing trees. The shoulders were apish too, and the widely flaring blades of the pelvis were as primitive as Lucy’s—but the bottom of the same pelvis looked like a modern human’s. The leg bones started out shaped like an australopithecine’s but gathered modernity as they descended toward the ground. The feet were virtually indistinguishable from our own.

“You could almost draw a line through the hips—primitive above, modern below,” said Steve Churchill, a paleontologist from Duke University. “If you’d found the foot by itself, you’d think some Bushman had died.”

But then there was the head. Four partial skulls had been found—two were likely male, two female. In their general morphology they clearly looked advanced enough to be called Homo. But the braincases were tiny—a mere 560 cubic centimeters for the males and 465 for the females, far less than H. erectus’s average of 900 cubic centimeters, and well under half the size of our own. A large brain is the sine qua non of humanness, the hallmark of a species that has evolved to live by its wits. These were not human beings. These were pinheads, with some humanlike body parts.

(5) And at the other end of the timescale, NASA is busy today downloading and interpreting photos of Pluto taken by New Horizons. 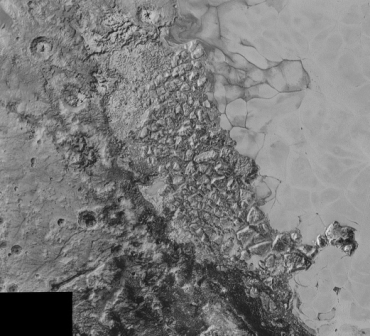 New close-up images of Pluto from NASA’s New Horizons spacecraft reveal a bewildering variety of surface features that have scientists reeling because of their range and complexity.

“Pluto is showing us a diversity of landforms and complexity of processes that rival anything we’ve seen in the solar system,” said New Horizons Principal Investigator Alan Stern, of the Southwest Research Institute (SwRI), Boulder, Colorado. “If an artist had painted this Pluto before our flyby, I probably would have called it over the top — but that’s what is actually there.”

New Horizons began its yearlong download of new images and other data over the Labor Day weekend. Images downlinked in the past few days have more than doubled the amount of Pluto’s surface seen at resolutions as good as 400 meters (440 yards) per pixel. They reveal new features as diverse as possible dunes, nitrogen ice flows that apparently oozed out of mountainous regions onto plains, and even networks of valleys that may have been carved by material flowing over Pluto’s surface. They also show large regions that display chaotically jumbled mountains reminiscent of disrupted terrains on Jupiter’s icy moon Europa.     “The surface of Pluto is every bit as complex as that of Mars,” said Jeff Moore, leader of the New Horizons Geology, Geophysics and Imaging (GGI) team at NASA’s Ames Research Center in Moffett Field, California. “The randomly jumbled mountains might be huge blocks of hard water ice floating within a vast, denser, softer deposit of frozen nitrogen within the region informally named Sputnik Planum.”

In the center of this 300-mile (470-kilometer) wide image of Pluto from NASA’s New Horizons spacecraft is a large region of jumbled, broken terrain on the northwestern edge of the vast, icy plain informally called Sputnik Planum, to the right. The smallest visible features are 0.5 miles (0.8 kilometers) in size. This image was taken as New Horizons flew past Pluto on July 14, 2015, from a distance of 50,000 miles (80,000 kilometers).

Primatologist, founder of the Jane Goodall Institute and UN Messenger of Peace

“Three books of my childhood probably had the greatest impact on my life. The Story of Doctor Dolittle’ (by Hugh Lofting) and ‘Tarzan of the Apes’ (by Edgar Rice Burroughs) inspired me to understand what animals were trying to tell us and instilled within me an equally strong determination to travel to Africa, live with animals, and write books about them. ‘The Miracle of Life’ was a large book my grandmother got for free by saving up coupons from cereal packets. It was by no means a book intended for children.”

(7) Connie Willis is interviewed by Colorado Public Radio in “Hugos Battle: Both Sides Claim Sci-Fi Is Being Ruined By Politics”. Via Kevin Standlee.

(8) Chuck Wendig has some good news about his new novel.

I kinda didn’t think Star Wars: Aftermath was going to make list. In part because why would I assume that, and also in part because most books come out on Tuesday and this book came out on Friday and it was also a holiday weekend and, and, and.

Apparently, that was wrongo of me.

Because Aftermath debuted on both the New York Times list and the USA Today list at number four. Which is extra funny because it’s a pair of fours which is like Force and because my tweet wanting to be hired to write Star Wars in the first place was on September 4th and because the book then came out exactly one year later on September 4th and also because I actually apparently have the Force. *shoots lightning into the sky*

(9) And maybe Chuck can sign his next book contract with one of these Star Wars themed pens from Cross.

(10) Science fiction has an advocate in Malaysia.

KUSHAIRI ZURADI discovered late last year that not many publishers were keen to publish Malay science fiction books when he offered his collection of short stories to them.

The 25-year-old author and medical school graduate recalls: “Some ­publishers believe the ­readership for Malay science fiction is too small [for them] to make a decent profit and they do not want to take a chance on these novels.”

Realising this, in August last year, Kushairi ­decided to found his own publishing ­company, Simptomatik Press, to self-publish his first book, ­Biohazard, featuring 14 of his short stories. All 14 ­stories dealt with ­microorganisms.

“In my final year in medical school, I studied microorganisms and I was fascinated by their life-cycles,” says Kushairi, who is currently ­waiting to start his ­housemanship.

“You cannot see them but they are everywhere. We have been taught that 90% of [the cells in the human body are actually] organisms ranging from bacteria to parasites.”

[Thanks to David Doering and John King Tarpinian for some of these stories. Title credit goes to File 770 contributing editor of the day Brian Z.]