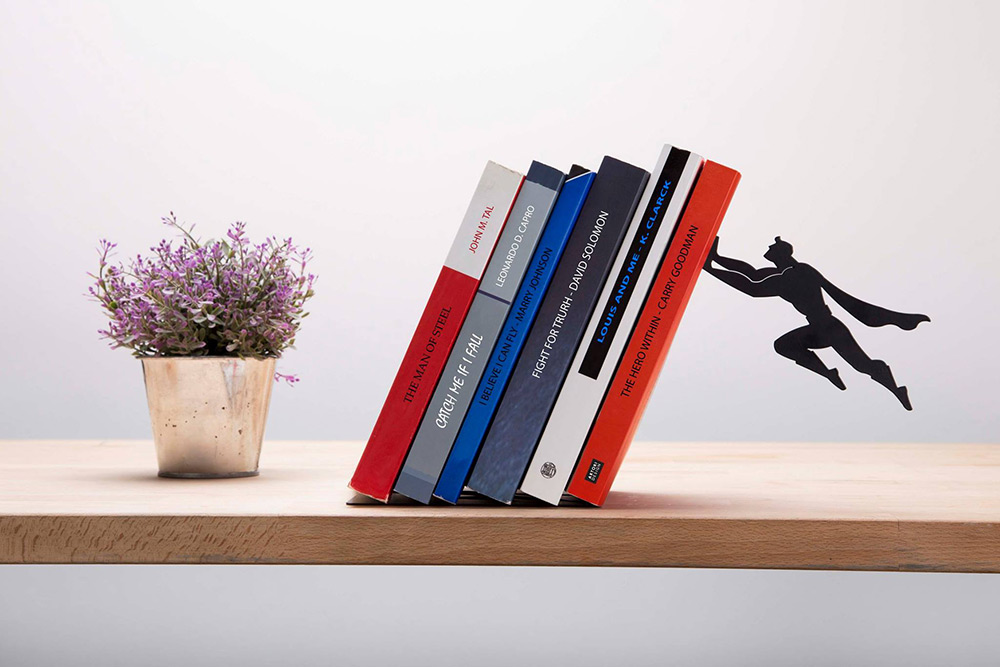 (1) These new bookshelf superheroes appear to save your favorite reads on Colossal:

Created by Artori Design, these fun metal bookshelves give the impression a stealthy superhero is saving your books from certain doom. The sideways version uses a magnet to harmlessly attach the end of the books, while the other model is a wall-mounted floating shelf that gives the impression a caped crusader is giving your books a boost from below. The shelves are currently available through Designboom.

(2) Amazing Stories continues its survey of what’s eligible for the 1941 Retro Hugo Awards with Part 3 – The Cover Artists:

The artists represented on the covers of 1940 run the gamut from the iconically familiar to the obscure:

(3) Yesterday’s installment of Pearls Before Swine has been accused of being a Feghoot.

(4) Mark Ciocco reviews The End of All Things by John Sclazi on Kaedrin Weblog.

The End of All Things When John Scalzi started his little serialized publishing experiment a few years ago with The Human Division, it felt a little like a television series. Each story was self contained and episodic in nature, and Scalzi even went as far as to call each installment an “Episode”. The book (unexpectedly and distressingly) even ended on a cliffhanger, and when he announced the sequel, he did so by saying that it had been “renewed for a second season“. Well, the new season has finally arrived, in the form of The End of All Things.

(5) While I’ve only made one attempt ever to get a blurb for something, I wish I had read John Scalzi’s blurb policy first. He wasn’t the one I asked, but based on what I learned here I would have gone about it differently.

All blurb requests must come through editors/publishers, not authors. This is to avoid me having to tell an author I don’t like their work enough to blurb it. That’s awkward. I will pre-emptively turn down requests from authors. So if you’re an author who wants me to blurb your work, ask your editor to take care of it.

Do you love Sci Fi movies?  Well, we’ve secured the rights to the best selling book series “Star of the Guardians” by author Margaret Weis and have a script ready to go!  Our vision for this epic story could be described as “Game of Thrones” meets “Battlestar Galactica”.

(7) The R2-D2 themed Boeing 787 Dreamliner rolled out the other day. It will go into service on All Nippon Airways (ANA). 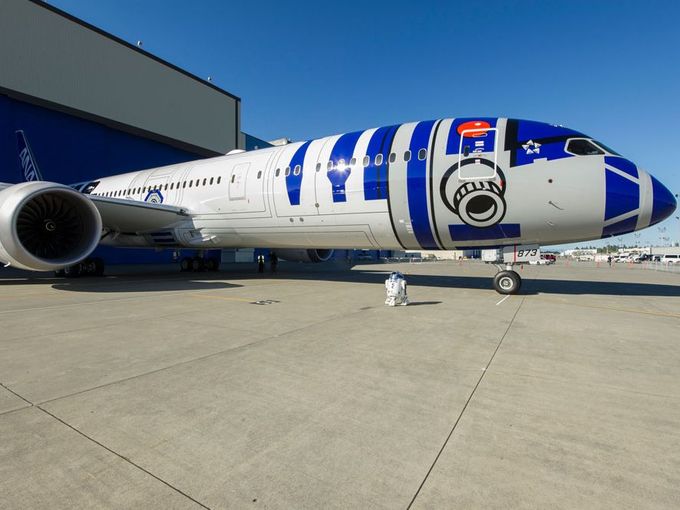 Star Wars theme music played and Storm Troopers held guard as the hangar doors began to open. Within moments, a Boeing 787 “Dreamliner” painted with likeness of R2-D2 emerged to a cheering crowd at Boeing’s wide-body assembly line facility in Everett.

The airplane featuring images of the loyal droid from the Star Wars franchise belongs to Japanese carrier All Nippon Airways (ANA) and will begin flying paying passengers Oct. 18. The jet’s first revenue flight is scheduled for a run between Tokyo’s Haneda Airport to Vancouver, Canada.

Saturday’s unveiling had been eagerly anticipated by both aviation and Star Wars enthusiasts since plans for the R2-D2-themed Dreamliner were first announced in April.

(8) The Museum of Pinball actually isn’t that far from me – down the road in Banning, CA. I should pay a visit.

Long before video games found their way into the home, arcades across America were filled with the lights and sounds of mechanical pinball machines and the young people who were enamored by them. These machines are now finding their way back into the spotlight in barcades, private collections, and professional pinball tournaments.

They broke the Guinness World Record on January 17 with 331 people playing pinball simultaneously.

And here are some other impressive numbers associated with the museum.

According to Martin Grams’ book The Twilight Zone: Unlocking the Door to a Television Classic, the final scene of “Kick the Can” was filmed on September 14, 1961.

[Thanks to Dave Doering, and John King Tarpinian for some of these stories. Title credit to File 770 contributing editor the day Nigel.]