If you’re a longtime reader, David Steffen’s name might sound familiar. He runs the Submission Grinder, an online sub tracker for writers, and he is also the current champion of Ferrett Steinmetz’s Rejection Challenge. He received a rejection to a story some five minutes after he submitted it. The submission was to Podcastle, and was very short, and was timed exactly perfectly for the slush reader to respond to it almost immediately. I know this because I was the slush reader in question. High five, David! I’m exceedingly glad you’re doing this antho.

(3) The first film Alfred Hitchcock worked on, once believed lost, will be shown publicly this week.

A “lost” Hitchcock film that has not been shown publicly for nearly 100 years is being screened this week at the British Silent Film Festival. Three Live Ghosts (1922) was one of the first films that the young Alfred Hitchcock worked on and had been thought lost forever.

It has just been discovered in a Russian archive and is being publicly shown thanks to Laraine Porter|, of De Montfort University Leicester’s renowned Cinema and Television History (CATH) research team. It is one of dozens of screen gems being shown as part of the festival – the UK’s largest event dedicated to silent films, supported by the British Film Institute. Laraine, who has organised the three-day film festival at Leicester’s Phoenix Cinema, said: “No-one has seen this since 1922 and many Hitchcock scholars thought it was no longer extant. He was credited as a title designer, but it is likely that he would have been involved much more than that. “When you read his interviews he is talking about helping out and advising, and in those days it would have been a much more communal atmosphere on set. ?“What is also interesting is the role that his wife, Alma, played because she was an editor and collaborator yet received little attention.”

Companies the world over are clamoring to release licensed merchandise ahead of the release of Star Wars: The Force Awakens. The recent Force Friday saw numerous products launched on an expectant public, but while most are priced between a few dollars and a few hundred dollars, rarer items come with a heftier price tag. One example of the latter is the limited-edition Star Wars watch from Devon, which will set Star Wars fans with very deep pockets back US$28,500….

Star Wars by Devon is actually based on the Devon Thread 1 model, but with plenty of Star Wars details added to ensure it will delight fans. Owners will be able to spot Darth Vader’s helmet, the wings of a TIE Fighter, and the Imperial Crest embossed on the crown. 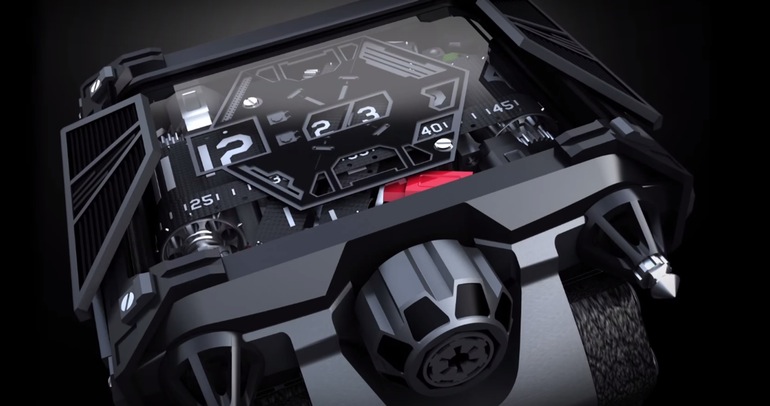 (6) Where’s the Official WSFS Ears-Are-Burning Fire Extinguisher? Kevin Standlee sure could use it about now.

(7) Jim C. Hines has a take about the Maynard/Valente exchange in “Cool Kids”

I get that a lot of us struggled growing up. We felt excluded, and we envied those who were more popular, more successful, more comfortable with themselves and their friends. Most of us continue to struggle. It’s part of being human. But this whole “Nerds vs. Cool Kids” thing is bullshit. It’s the same artificial and simplistic us vs. them, left vs. right, puppy vs. anti-puppy, Hero vs. Villain garbage that’s been poisoning people for ages.

There will always be small-minded people trying to divide the world into Us and Them. Some of these folks have found that dispensing poison earns them attention and followers.

That doesn’t mean the rest of us have to drink it.

(8) Disney is working towards a new Mary Poppins movie (not a remake or a reboot) says The Hollywood Reporter.

The new story will be set around 20 years after the tale of the classic 1964 movie that starred Julie Andrews and Dick Van Dyke. It will also take its cues from the book series that P.L. Travers wrote. (The original, published in 1934 is based largely on the first book. The last book in the series was released in 1988.)

Rob Marshall, who directed “Into the Woods” and “Pirates of the Caribbean: On Stranger Tides” for the studio, will helm the new feature, which will also be a musical.

Songwriting team Marc Shaiman and Scott Wittman, who worked on “Hairspray” and “Smash,” will compose new original songs as well a new score.

David Magee (“Life of Pi”) is board to write the screenplay.

As detailed in Disney’s “Saving Mr. Banks,” Travers’ had testy relationship with Walt Disney over the adaptation of the original. But the studio is working with her estate on the new movie.

(9) Not everyone appreciates astronaut and baseball fan Terry Virts as much as he deserves. Virts arranged to present a space-worn Orioles jersey to team manager Buck Showalter. But what was Buck’s response? He wanted to know —

“Do you have rubber gloves when you take it? It’s not like it’s been on the moon or something, right? … You don’t know what bacteria from Mars is up there or something. Next day you wake up and your arms are ate off or something.”

But I would credit his Campbell win to the fact that those two novels, The Revolution from Rosinante and Long Shot For Rosinante , really are fun little books, books I was certain I would not regret revisiting after a gap of twenty-two years 3.

(I do understand that’s like saying “Don’t worry, I know what I am doing” while playing with burning plastic.)

(And I hope including the parenthetical sentence spares you from unrealistic expectations of reading a nostalgic puff piece….)

(10) Lorraine Devon Wilke’s “Dear Self-Published Author: Do NOT Write Four Books a Year” at the Huffington Post has elicited much scoffing from some indie published sf writers – and now Baen novelist Larry Correia has deconstructed it in “Fisking the HuffPo because writers need to GET PAID”.

The thing is “good” is a relatively meaningless measurement. Ringo’s fans think they’re good enough to give him mid six figure royalty checks twice a year. Kevin [J. Anderson] lives in a castle. I’m pretty sure the average HuffPo writer considers me a hack, but then again, I get paid, and HuffPo writers don’t (no, really, I was shocked to learn that HuffPo only pays in “exposure”).

That’s a knockout line as long as you don’t remember Correia is delivering this fisking free of charge on a blog.

[Thanks to both Marks, Will R., Martin Morse Wooster, and John King Tarpinian for some of these stories. Title credit belongs to File 770 contributing editor of the day Anna Nimmhaus.]