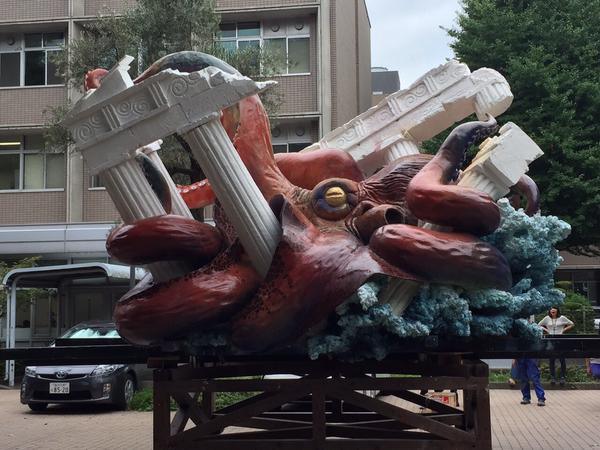 This massive work of art, which features a giant octopus wrapped around a Greek-style temple, has captured the attention of people across Japan. Now that the festival is over, though, the students are asking if anyone wants to buy it!

More photos of the work on parade at the Rocket News 24 website.

(2) Of course, being scientists, these folks had to do what every science fiction fan knows better than to do — revive the ancient giant virus.

It’s 30,000 years old and still ticking: A giant virus recently discovered deep in the Siberian permafrost reveals that huge ancient viruses are much more diverse than scientists had ever known.

They’re also potentially infectious if thawed from their Siberian deep freeze, though they pose no danger to humans, said Chantal Abergel, a scientist at the National Center for Scientific Research at Aix-Marseille University in France and co-author of a new study announcing the discovery of the new virus. As the globe warms and the region thaws, mining and drilling will likely penetrate previously inaccessible areas, Abergel said.

“Safety precautions should be taken when moving that amount of frozen earth,” she told Live Science. (Though viruses can’t be said to be “alive,” the Siberian virus is functional and capable of infecting its host.)

…The new virus isn’t a threat to humans; it infected single-celled amoebas during the Upper Paleolithic, or late Stone Age.

(3) Next step, Wolverine? Claws still required, and it’s titanium not adamantium, but… a Spanish hospital recent replaced a significant amount of a man’s rib cage and sternum with a titanium replacement.

Putting titanium inside people’s chests is nothing new, but what made this different was the implant was 3D printed to match his existing bone structure.

(4) Lost In Space first got lost on September 15, 1965. The Los Angeles Times visited with some of the original cast.

Fifty years after the CBS sci-fi series “Lost in Space” blasted into orbit on Sept. 15, 1965, the show’s five surviving stars are still very close. A few gather each year to have dinner to celebrate the birthday of Jonathan Harris, the late actor who played the diabolical and very funny Dr. Zachary Smith.

“We have stayed very much like a normal dysfunctional family,” said Bill Mumy, who played child prodigy Will Robinson during the series’ three-season run.

Baby boomers who grew up watching “Lost in Space” still have a strong connection to the campy show, which boasted a terrific early score from Oscar-winner John Williams, then billed as Johnny Williams.

“When I do these conventions, people are still so wrapped up in it,” said June Lockhart, who played matriarch Maureen Robinson. “The last time I did one, I said, ‘Excuse me.’ I looked out at the audience and said, ‘I must remind you: It was all pretend!'”

“Lost in Space” was created and produced by Irwin Allen, who went on to make such disaster film classics as “The Poseidon Adventure” (1972) and “The Towering Inferno” (1974).

The series revolved around the Robinson family — John Robinson (Guy Williams), his wife (Lockhart) and their children Judy (Marta Kristen), the brilliant Penny (Angela Cartwright) and Will.

On the anniversary date, Cartwright and Mumy released a new book, Lost (and Found) in Space, a memoir with rare photographs.

(5) Steven H Silver recreates a convention report of the 1976 Worldcon in Kansas City in “A Brief History of MidAmeriCon” at Uncanny Magazine.

Early projections seemed to indicate that Big MAC would have as many as 7,000 members and the committee knew they couldn’t handle a con that size. To ensure it didn’t happen, they introduced the sliding rate scale, making the con more expensive the later a fan bought a membership, they announced that they would not run an all–night movie room, and they also announced there would be no programming related to comic books, Star Trek, Planet of the Apes, or the Society for Creative Anachronism. All of these decisions were met with howls of protest. MidAmeriCon was clearly attempting to destroy fandom and the Worldcon.

Keller was also concerned that people would crash MidAmeriCon, so prior to the convention, he announced that the convention would have a foolproof way of ensuring that only paid members were in attendance. There was much speculation prior to the Worldcon that this meant holograms on the badges. Keller had something else in mind and each attendee was given a plastic bracelet that could not be put on again once it was taken off. Of course, foolproof doesn’t mean fanproof, and some fans set themselves the goal of subverting the security measure. They found a woman who was being released from the hospital and convinced her to continue to wear her hospital ID, so they could try to bring her to the various official functions of the convention. They succeeded.

(6) People are still hard at work mapping what parts of the universe SFWA controls.

SICHA: There’s a sort of growing professional class of writers that may not have had access to being a professional. Before the internet, you would go to your terrible job and then you would write at night. I actually found that system really rewarding, separating out the money and the work.

LE GUIN: On the other hand, if it was a nine-to-five job, and if you had any family obligations and commitments, it’s terribly hard. It worked very much against women, because they were likely to have the nine-to-five job and really be responsible for the household. Doing two jobs is hard enough, but doing three is just impossible. And that’s essentially what an awful lot of women who wanted to write were being asked to do: support themselves, keep the family and household going, and write.

SICHA: And the writing was the first thing to go when things got tough, I’m sure.

LE GUIN: I had only a little taste of that. I did have three kids. But what my husband and I figured—he was a professor and teaching a lot—was that three jobs can be done by two people. He could do his job teaching, I could do my job writing, and the two of us could do the house and the kids. And it worked out great, but it took full collaboration between him and me. See, I cannot write when I’m responsible for a child. They are full-time occupations for me. Either you’re listening out for the kids or you’re writing. So I wrote when the kids went to bed. I wrote between nine and midnight those years. And my husband would listen out if the little guy was sick or something. It worked out. It wasn’t really easy but, you know, you have a lot of energy when you’re young. Sometimes I look back and I think, “How the hell did we do it?” But we did.

David Pilgrim is the founder and curator of the About the Jim Crow Museum of Racist Memorabilia at Ferris State University in Big Rapids, MI.

For many people, especially those who came of age after landmark civil rights legislation was passed, it is difficult to understand what it was like to be an African American living under Jim Crow segregation in the United States. Most young Americans have little or no knowledge about restrictive covenants, literacy tests, poll taxes, lynchings, and other oppressive features of the Jim Crow racial hierarchy. Even those who have some familiarity with the period may initially view racist segregation and injustices as relics of a distant, shameful past. A proper understanding of race relations in this country must include a solid knowledge of Jim Crow—how it emerged, what it was like, how it ended, and its impact on the culture.

Understanding Jim Crow introduces readers to the Jim Crow Museum of Racist Memorabilia, a collection of more than ten thousand contemptible collectibles that are used to engage visitors in intense and intelligent discussions about race, race relations, and racism. The items are offensive. They were meant to be offensive. The items in the Jim Crow Museum served to dehumanize blacks and legitimized patterns of prejudice, discrimination, and segregation.

Using racist objects as teaching tools seems counterintuitive—and, quite frankly, needlessly risky. Many Americans are already apprehensive discussing race relations, especially in settings where their ideas are challenged. The museum and this book exist to help overcome our collective trepidation and reluctance to talk about race.

(9) In “An Interview With Jennifer Brozek” at Permuted Press, the author and editor is unflinching, positive and brave.

Permuted: With the Hugo Awards sparking so much debate this year, do you have any thoughts on the controversy in general as a nominated editor?

Jennifer: Awards are a funny thing. I’m honored to have been nominated. I’m glad my part in the controversy is over. I’m also really pleased that there is a renewed interest in the Hugo award itself. Talk about an adrenalin shot in the arm.

Permuted: Your protagonist in the NEVER LET ME series, Melissa, has bipolar disorder. Can you describe your experience writing a character with a mental illness?

Jennifer: As a high functioning autistic adult, I am very aware of how people in media are portrayed. Either the mental illness is a superhero power (Alphas, Perception) or it makes a person a psychopathic criminal. It is rarely shown in-between. It is rarely shown as it really is—something millions of people deal with every single day. There are a lot of physical aspects to mental illness as well as coping mechanisms. With Melissa, I wanted to show a protagonist who had mental illness but it was neither a “power” nor something that made her unable to cope with the world. She is medicated and it works. This is the goal of every person suffering from mental illness on meds.

(10) Light in the Attic Records has released soundtrack to the documentary Jodorowsky’s Dune. It is available in 2xLP and CD.

This is the soundtrack to the story about the greatest film that never was.

Building upon director Frank Pavich’s idea for a score with a “Tangerine Dream-type feel,” Stenzel lays out a cosmic arsenal of analog synthesizers that would make any collector green at the gills: among other gems are a rare Moog Source, CZ-101s, and a Roland Juno 6, as well as unorthodox instruments like a toy Concertmate organ and a Nintendo DS. “I also played guitar and did vocals,” says Stenzel, “some chanting… and some screaming, which comes naturally to me.” The score also features narration by Jodorowsky himself. As Stenzel notes, “Jodo’s voice is actually the soundtrack’s main musical instrument–listening to him was almost like hypnosis, like going to the guru every night.”

[Thanks to Rob Thornton, Will R., Mark, JJ, and John King Tarpinian for some of these stories. Title credit to File 770 contributing editor of the day Kendall.]

223 thoughts on “Pixel Scroll 9/16 Like sands through the hourglass, so are the Scrolls of Our Lives”