(1) Curbed LA is not alone in thinking “The New Look of the Petersen Automotive Museum is Really Really Bad”. 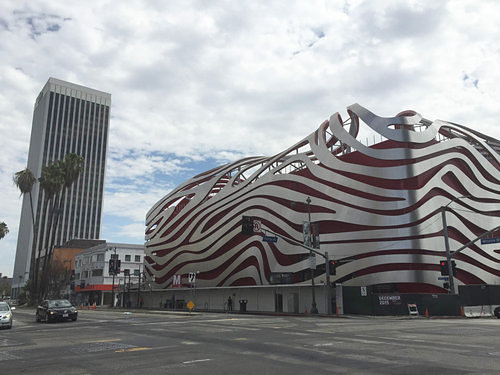 Shawn Crosby hit the nail on the head – “It looks as if the Petersen had skinned Disney Concert Hall Buffalo Bill style and is wearing its bloody outsides like a dress.”

The Mist is about how a group of citizens react when—you guessed it—a mysterious mist takes over their town, filled with horrible monsters. Both the movie and novella mostly take place in a isolated supermarket but the TV show will only use that as inspiration, and will have a larger scope.

(3) Anne and Wil Wheaton are hosting “Fancy Dinner: Burgers, Beer, and a Book” on October 20 from 6:30-9 p.m. at Crossings restaurant in South Pasadena. Admission is $100 per person. Click on the link for menu and other details.

At the end of the evening, you will get your own, autographed, advance copy of our book “A Guide To Being A Dog by Seamus Wheaton.” Proceeds from this event will be donated by Crossings to the Pasadena Humane Society to support our participation in the Wiggle Waggle Walk.

(4) This is a good example of what people look to SFWA for — Jennifer Brozek discusses “How Do You Ask For A Blurb?” on the SFWA Blog.

How do you ask for these blurbs without making a nuisance of yourself? You do your research. Many professional authors have “blurb and review” policies in place on their websites, mostly out of self-defense. An author can read only so many books when they are not writing or doing their own story research. Some of these policies may be “No. I will not blurb your book.” Some of them may be “Talk to my agent.” Whatever the posted blurb policy is… follow it. That’s the polite and correct thing to do.

If you have an agent, you can talk to them about talking to the agent of the author you’d like a blurb from. Your agent should have a decent handle on who can be approached and who should be avoided. If you don’t have an agent, you need to do things the old fashioned way: ask.

What this little episode did remind me of is the fact that, in many ways, Bob served as a surrogate grandfather for me.  Both of mine passed before I’d been on this planet five years, and as anyone who has read Time Enough For Love can tell you, a rascally, unrepentant and self-assured grandfather is a must have in the proper development of the creatures we euphemistically call little boys.

And of course it then occurred to me that there were quite a few humorous (and not so humorous) lessons to be had from all of Heinlein’s books and, lacking the kind of social restraint that would undoubtedly have been passed on to me by a real-life grandfather, I have decided to share some of them with you.

Being above average is important, because being average sucks —

The average book sells 3000 copies in its lifetime (Publishers Weekly, 2006).

Yes. It’s not missing a zero.

Take a breath and read that again.

The average traditionally published book which sells  3,000 in its entire lifetime in print only sells about 250-300 copies its first year.

But I’m going indie! you say. My odds are better!

No, grasshopper. Your odds are worse.

(7) Wallpaper Direct has a fun infographic about Doctor Who villains through time.

The role of The Doctor has been assumed by 12 respected actors, each bringing their own quirks and characteristics to the programme. Along with his Mark I Type 40 TARDIS (Time and Relative Dimension in Space), the time travelling rogue has blasted his way across space, but not without gaining some enemies in the process.

From the Daleks to the Cybermen, we take a look at the most notable enemies from the Dr. Who franchise.

And they’d be thrilled to see you some wall covering from their Dr. Who Wall Mural collection.

Officially licensed wallpaper murals based on the latest BBC series with Doctor Who starring Matt Smith as the Time Lord – from the company Black Dog Murals. The mural is easy to hang – paste the wall product and each is supplied in a box, with full hanging instructions. Please read the hanging instructions carefully. The mural is supplied in pre-cut lengths. The lengths are sometimes reverse rolled due to the manufacturing process. If you are in any doubt regarding direction of pattern please refer to website.

(8) Steve Davidson is back with another installment of what’s eligible for the Retro Hugos that will be voted on by next year’s Worldcon members – Part 4 – Media, specifically, the Long Form category.

However, when it comes to film there are a few interesting contenders, and, fortunately, the vast majority of eligible works are known and viewable, thanks largely to the Internet Archive, Youtube and copyright law.

I’m looking forward to short form, where there should be a trove of radio shows and phonograph records, too.

Daily Double Answer: This novel by Sinclair Lewis caused and uproar for its satiric indictment of fundamentalist religion

Question from returning champ: What is Ender’s Game?

It’s hard reality actually from the security industry; the experiences that inform some of my fiction.  There are some dramatic moments and instances recounted and the writing is some of my best. If it were a poetry book you’d at least look at the sample.

The volume is edited by Leigh Strother-Vien and Gavin Claypool.

A collection of “Security Counterpoint” columns that originally appeared in Security Technology & Design Magazine between 1993 and 2001 about problems and concerns that are still relevant today. Francis Hamit spent 21 years in that industry in operational, sales and consulting positions.

(11) A tough day for the let’s-you-and-him-fight crowd – because John Scalzi begins “How Many Books You Should Write In a Year” with this preamble:

Folks have pointed me toward this Huffington Post piece, begging self-published authors not to write four books a year, because the author (Lorraine Devon Wilke) maintains that no mere human can write four books a year and have them be any good. This has apparently earned her the wrath of a number of people, including writer Larry Correia, who snarks apart the piece here and whose position is that a) the premise of the article is crap, and b) authors should get paid, and if four books a year gets you paid, then rock on with your bad self. I suspect people may be wanting to have me comment on the piece so I can take punches at either or both Wilke or Correia, and are waiting, popcorn at ready.

If so, you may be disappointed. With regard to Correia’s piece, Larry and I disagree on a number of issues unrelated to writing craft, but we align fairly well here, and to the extent that I’m accurately condensing his points here, we don’t really disagree.

(12) “Here’s how the first humans will live on Mars –and why traveling the 140 million miles to get there will be the easy part” – despite the headline, it’s not a story about The Martian. It’s a pointer to an eye-grabbing infographic based on TED speaker and technologist Stephen Petranek’s book on How We’ll Live on Mars.

[Thanks to Mark, Francis Hamit, and John King Tarpinian for some of these stories. Title credit goes to File 770 contributing editor of the day Iphinome.]