(1) Product placement. Would you like to guess what product is featured in The Martian?

Aston Martin, Omega, and Burberry will be among the brands proud to be associated with Spectre, the latest James Bond movie when it opens next month. But with product placement and promotional tie-ins now generating big bucks for movie-makers, brands eager to share a piece of the big-screen action now extend well beyond the usual suspects.

For proof, look no further than The Martian, the new sci-fi action adventure starring Matt Damon, which opens in the UK later this week complete with… an official potato. Though even this is not the most surprising in a recent series of increasingly bizarre promotional couplings.

…The end result is a promotional campaign for which the film studio used its connections with NASA to provide Albert Bartlett customers with an all-expenses-paid family trip to the Kennedy Space Center as a competition prize in a Martian-themed promotional campaign.

“They wanted exposure. They also knew that, while the film will have big appeal with single blokes, they needed a way to open it up to a wider, family audience,” Marcantonio explains. “Which means it makes sense at a number of different levels. Unlike when soft drinks companies tie up with just about any family movie they can find to reach kids, this tie-up is anything but spurious.”

Indeed. And for a more mundane reason, too. Because like the planet Mars, Albert Bartlett’s best-selling potato – the Rooster – is … red.

(2) Not all of the marketing has been a success.

Remember what I said the other day about not betting against David Gerrold when science fiction cinema is on the line?

So, here’s my review of The Martian…which I was supposed to see tonight.

The studio’s public relations department is run by idiots.

If you arrange a screening, and if you make passes available to hundreds of fans — warning them ahead of time that you have overbooked and nobody is guaranteed a seat is not an excuse. It’s a cop-out.

You don’t turn away a hundred or more people at the door and shrug it off and say, “Sorry.”

What you do is you say, “Let’s make it up to these people who came all this way and waited all this time.” You go to the management of the theater and say, “We want to schedule a second screening after the first one concludes so that no one goes home disappointed.” That not only gives you good PR with the audience but it helps generate good word-of-mouth three days before the film opens.

The movie might be good. I expect it will be. But the PR people just pissed off at least a hundred fans who waited two hours or longer in line. Not good. Just not good.

(3) Astronaut Clayton C. Anderson, who did get into a screening, wrote this review:

Having already read and enjoyed Weir’s excellent adventure, I was pleasantly surprised with the effective presentation of the novel on screen. Seeing beautiful Martian vistas, punctuated by mountainous terrain in variegated hues of orange, made it seem as if humans were already living there. The use of high-altitude and digitally accurate perspectives of the Martian surface pulled at my heart strings. And I loved that Andy Weir developed a relationship with NASA after publishing the novel, leading the push to involve the space program directly with Scott. The resulting emphasis on science provides an enjoyable balance between the film’s considerable entertainment value and its educational, inspirational, and technological references.

(4) A New Yorker cartoon contains the greatest proof yet of life on Mars….

RUSH LIMBAUGH: There’s so much fraud. Snerdly came in today ‘what’s this NASA news, this NASA news is all exciting.’ I said yeah they found flowing water up there. ‘No kidding! Wow! Wow!’ Snerdly said ‘flowing water!?’ I said ‘why does that excite you? What, are you going there next week? What’s the big deal about flowing water on Mars?’ ‘I don’t know man but it’s just it’s just wow!’ I said ‘you know what, when they start selling iPhones on Mars, that’s when it’ll matter to me.’ I said ‘what do you think they’re gonna do with this news?’ I said ‘look at the temperature data, that has been reported by NASA, has been made up, it’s fraudulent for however many years, there isn’t any warming, there hasn’t been for 18.5 years. And yet, they’re lying about it. They’re just making up the amount of ice in the North and South Poles, they’re making up the temperatures, they’re lying and making up false charts and so forth. So what’s to stop them from making up something that happened on Mars that will help advance their left-wing agenda on this planet?’ And Snerdly paused ‘oh oh yeah you’re right.’ You know, when I play golf with excellent golfers, I ask them ‘does it ever get boring playing well? Does it ever get boring hitting shot after shot where you want to hit it?’ And they all look at me and smile and say ‘never.’ Well folks, it never gets boring being right either. Like I am. But it doesn’t mean it is any less frustrating.

(6) GeekTyrant says this is the 10-foot inflatable Jabba the Hutt you’re looking for. 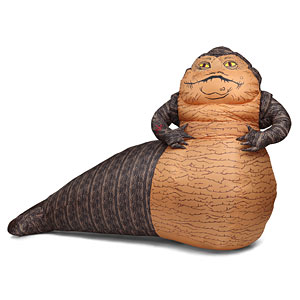 Here’s something that’s sure to piss off your neighbors: a ten-foot long, six-foot tall inflatable Jabba the Hutt, perfect for decorating your front lawn or as the centerpiece for that Star Wars-themed party you might be planning. You can bring it with you to wait in line for The Force Awakens, use it as a Home Alone-style distraction to make potential robbers think a large alien lives in your home…the possibilities are too numerous to entertain in one sitting.

“I say put a Santa hat on him and put him in the front yard,” is John King Tarpinian’s advice.

Or give him his own radio show.

(7) Elizabeth Bear lets readers in on the drafting process…

"The blow that struck her came so long before the sound that she almost did not hear the massive [onomatopoeia] that followed." #howprosdoit

(8) Rights to Heinlein’s “The Man Who Sold The Moon” have been acquired by Allen Bain’s firm Bainframe. It will be developed for television.

Bain (Two Men In Town, Revenge Of The Green Dragons) founded Bainframe to tell stories that have “the power to inspire people to dream of a better tomorrow.” This is the shingle’s second rights buy, following Octavia E. Butler’s Dawn.

…The Man Who Sold The Moon tells the tale of Delos D. Harriman, a businessman possessed by a dream to take humanity off-Earth. As a young entrepreneur, he starts a private space company to colonize the moon and create the home he never had. He is driven to the brink while single-handedly ushering the entire human race to its next evolutionary step.

“This story is inspiring because the private space race is happening now and will become a reality within a decade. This is not some far flung science fiction yarn. It is something we are going to experience in our lifetime,” says Bain. The timing coincides with yesterday’s announcement by NASA of strong evidence there is flowing water on Mars. “The Man Who Sold the Moon allows us to imagine how the space race will play out, but at its core it’s really a gripping portrait of a complex character with an impossible dream.”

Bain notes that Harriman’s journey is reminiscent of the current crop of space pioneers like Richard Branson (Virgin Galactic), Jeff Bezos (Blue Origin) and Elon Musk (SpaceX) who has credited Heinlein as an inspiration.

(9) WisCon posted a report in June about the results of the first con run under its new anti-abuse policy.

This year was the first convention where we had a formal procedure in place for what to do when individuals attending WisCon violate the code of conduct described in our anti-harassment policy. The policy is intended to be flexible to allow for different situations, but its basic idea is that if somebody reports a harassing behavior to Safety, the person responsible can be issued a warning and asked to do something differently (such as staying away from a place or person). If warnings aren’t attended to or harassing behavior escalates, the policy describes a few more options, including –– in the worst case scenario, which we hope to avoid –– that Safety and Chairs in consultation with available Anti-Abuse Team members can make a collective at-con decision to ban someone from WisCon.

Now that the convention is over, Safety has handed off their at-con reports to the full Anti-Abuse Team, which is reviewing reports that are still open post-con and evaluating how well the policy performed on- site. Here’s how things looked in our first year:

(10) Curbed has a report on a film adaptation of J.G. Ballard’s High Rise coming to film festivals.

The novel begins with a truly surreal opening line—”later, as he sat on his balcony eating the dog”—and the story explores a societal breakdown similar to of-the-moment entertainment franchises such as The Walking Dead. But in J.G. Ballard’s 1975 High-Rise, the subject of a new film adaptation starting to make the festival rounds this month, the enemy isn’t some virus or the undead. The residents of a new London high-rise slowly regress and devolve into tribal infighting not due to some outside force altering their environment, but because of the environment itself. The tower becomes a character in the story, written as a symbol of the meticulous (and ultimately very fragile) class systems built up by society.

(11) Wired has interviewed David J. Peterson about his new book in “How To Invent A Language, From The Guy Who Made Dothraki”.

Some Conlangers Want to Keep Their Hobby Arcane

Peterson recognizes there are “definitely some negative aspects” to the growth in conlang popularity. He cites linguistic pioneer J.R.R. Tolkein’s The Lord Of The Rings as an example of the community’s instinct toward self-protection. “There were some people who reacted negatively [when LOTR was published] because they knew conlang would start to get more attention, and they didn’t want that,” he says. Until recently, the community has been a supportive niche for people with a very specific interest. But as television shows and films with created languages continue to pop up in more places, it’s no longer as heavily guarded.

His Book Aims to Codify Conlang Knowledge For Posterity

Constructed languages have existed for centuries, but the advent of the internet brought with it the listserv that created a true community of peers. Since then, the community has grown hugely—but as the internet has changed, a new generation of conlangers on various social networks has become more spread out and unaware of each other. “I’ve met dozens of conlangers on Tumblr, all new, all young, who have no idea that each other exist,” he says, “because they’re with the mass kind of shouting into the wind.” None of them know about the old conlang listserv, and now it’s an antiquated form of digital communication, so “they don’t want to bother with that.” Peterson worries about redundancies that would arise from the lack of connection. “They’re inheriting a kingdom they really don’t know the history of, and know nothing about,” he says. They’re reinventing every single wheel we already perfected.” The Art Of Language Invention is a way of bridging the gap between the old and new conlangers by becoming a codex of sorts, preserving knowledge of constructed language much in the same way ancient languages have been preserved throughout history.

[Thanks to Mark sans surname, Andrew Porter, Ansible Links, and John King Tarpinian for some of these stories. Title credit goes to File 770 contributing editor of the day Will R.]