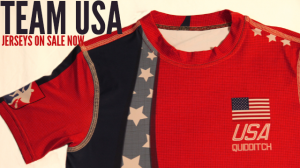 The International Quidditch Association will publicize Muggle Quidditch, the real-world version of the game in J.K. Rowling’s Harry Potter series, by holding a demo this summer during (but not as part of) the 2012 London Olympics.

Muggles occupy a niche in the Potter stories comparable to that of “mundanes” in the fannish lexicon. Thus, Muggle Quidditch is so-called because players compensate in various ways for the absence of magic from our mundane world. Here’s one example —

While the Snitch is a magical object within the canon of the Harry Potter novels, in Muggle Quidditch the Snitch is simply a tennis ball contained in a sock tucked in the waistband of the snitch runner. The snitch runner is a neutral player affiliated with neither team dressed in all gold or yellow, sometimes adorned with wings. After release, the snitch runner (and thereby the snitch itself) is allowed to roam an area beyond the playing field.

The IQA is hawking copies of the national team jerseys players will wear in London, with Australia, UK, France and USA currently available.

[Thanks to James Hay for the story.]