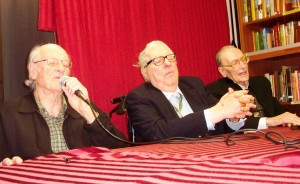 Ray Harryhausen, Ray Bradbury and Forry Ackerman at the Three Legends event in 2008.

Visual effects genius Ray Harryhausen, who brought the fantastic alive using stop-motion animation, died May 7 in London at the age of 92.

Between 1949 and 1981 he created effects for Mighty Joe Young, The Beast from 20,000 Fathoms (partly based on a short story, “The Fog Horn,” by Ray Bradbury), It Came from Beneath the Sea, The Animal World, 20 Million Miles to Earth, The 7th Voyage of Sinbad, The 3 Worlds of Gulliver, Mysterious Island, Jason and the Argonauts, First Men in the Moon, One Million Years B.C., The Valley of Gwangi, The Golden Voyage of Sinbad, Sinbad and the Eye of the Tiger and Clash of the Titans.

Harryhausen’s fascination with special effects began in 1933 when he saw King Kong, the handiwork of pioneering animator Willis O’Brien. (They would eventually work together on Mighty Joe Young). Harryhausen’s devotion to King Kong also led to his lifelong friendships with Forrest J Ackerman and Ray Bradbury. He went to a revival of the movie in the early 1940s and saw some stills on display he wanted to copy. The theater employee he asked was Roy Test Jr., co-founder of the Los Angeles Science Fantasy League, who knew the owner of the photos, Forry Ackerman and put them in touch.

An important part of Harryhausen’s success was his new ideas. The New York Times explains:

The heart of his technique was a process he developed called Dynamation. It involved photographing a miniature — of a dinosaur, say — against a rear-projection screen through a partly masked pane of glass. The masked portion would then be re-exposed to insert foreground elements from the live footage. The effect was to make the creature appear to move in the midst of live action. It could now be seen walking behind a live tree, or viewed in the middle distance over the shoulder of a live actor — effects difficult to achieve before.

As for the famous skeletons in Jason and the Argonauts, Harryhausen wrote in 2003 that:

Each of the model skeletons was about eight to 10 inches high, and six of the seven were made for the sequence. The remaining one was a veteran from The Seventh Voyage of Sinbad, slightly repainted to match the new members of the family. When all the skeletons have manifested themselves to Jason and his men, they are commanded by Acetes to ‘Kill, kill, kill them all,’ and we hear an unearthly scream. What follows is a sequence of which I am very proud. I had three men fighting seven skeletons, and each skeleton had five appendages to move in each separate frame of film. This meant at least 35 animation movements, each synchronised to the actors’ movements. Some days I was producing less than one second of screen time; in the end the whole sequence took a record four and a half months.

His innovations were honored in 1992 with a career Academy Award for technical achievement. At the Oscar ceremony, Tom Hanks told the audience that he thought the greatest movie of all time was not Citizen Kane or Casablanca but Jason and the Argonauts. Which is quite a reversal of fortunes when you consider that Harryhausen’s The 7th Voyage of Sinbad, a 1959 Hugo nominee, lost to No Award.

Science fiction fandom did eventually become more appreciative. Harryhausen was a Worldcon Guest of Honor in 1987 at Brighton. And he was inducted into the Science Fiction Hall of Fame in 2005.

His filmmaking colleagues also found ways to acknowledge him, dropping in references to his name in animated movies, such as Harryhausen’s restaurant in Monsters, Inc., and giving him live cameos in Beverly Hills Cop III (1994, Bar Patron) and Mighty Joe Young (1998, Gentleman at Party).

Harryhausen’s last feature was Clash of the Titans in 1981. A proposed follow-up, Force of the Trojans, never got a green light. He also came to believe that the movie industry had changed for the worse:

The thing that finally persuaded me to quit was that I saw that the nature of the hero was changing. When I was growing up we had heroes such as Cary Grant, Ronald Colman and David Niven, real gentlemen on the screen. Now, all you have is Arnold Schwarzenegger, Sylvester Stallone and all those people who solve problems with their fists. It’s a different world and I sometimes feel I’m not part of it. Say what you like about Hollywood in my time, but they were in the business of happy endings, of escapism. Now, you have to sit through two hours of people dying, you know. Today, everything’s so graphic it’s rather unnerving.

Harryhausen is survived by his wife, Diana Livingstone Bruce, who he married in 1963. Said Bradbury, “He found just the right woman at just the right time, and it worked out terrifically.”