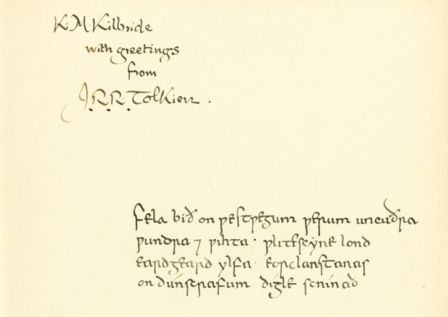 A first edition copy of J.R.R. Tolkien’s The Hobbit sold for £137,000 (nearly $210,000) in a Sotheby’s auction on June 4, more that twice the previous record. The copy once belonged to his former student Katherine Kilbride.

Tolkien inscribed very few copies of The Hobbit upon publication. Kilbride was among a total of two dozen friends, family and colleagues Tolkien listed within a set of page proofs of The Hobbit whom he wished to present copies of the novel. C. S. Lewis was another.

The Guardian identified the inscription as a poem in Old English, with this interpretation:

Tom Shippey’s study of Tolkien’s fiction, The Road to Middle-Earth, cites a similar poem and translates it as: “There is many a thing in the West-regions unknown to me, marvels and strange beings, a land fair and lovely, the homeland of the Elves, and the bliss of the Gods …”

But the inscription diverges in the third line. According to Professor Susan Irvine at UCL, Tolkien followed “eardgard elfa” or “the homeland of the elves” with “eorclanstanas / on dunscrafum digle scninath”, which she translated as “precious stones / shining secretly in mountain caves”.

Kilbride’s letter of acknowledgement for the gift is preserved in the Tolkien papers in the Bodleian Library. She notes “what fun you must have had drawing out the maps”.

1 thought on “Record Price For The Hobbit”