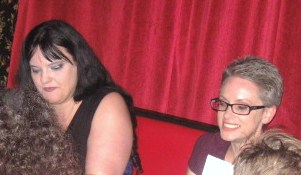 By Mark L. Blackman: On the first evening of summer – the longest night of the year – Wednesday, June 21, the monthly Fantastic Fiction Readings Series presented fantasy authors Catherynne M. Valente and Sunny Moraine at its longtime venue, the aptly-named Red Room of the second-floor KGB Bar in Manhattan’s East Village. (Despite the throng, the room was pleasantly cool; must be the altitude.)

Series co-host Matthew Kressel greeted the crowd, acknowledged the Solstice, and offered a “big, huge, enormous thank-you to everyone who donated to” their fundraiser on Kickstarter to cover the Series’ expenses. (While the readings are always free and there’s no cover charge, it costs money to run; readers receive a small stipend and are treated to dinner afterward.) They raised over $9,700, more than double their goal, enough funds to keep the Series running for at least six more years. Rob Cameron (“Cam”) from Brooklyn Speculative Fiction Writers was given a minute or so to plug the Kickstarter for the second season of their podcast (kaleidocast.nyc). Kressel then announced upcoming readers:

All dates are the third Wednesday of the month. Additional details may be found at http://www.kgbfantasticfiction.org/. 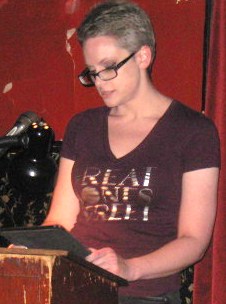 The first reader was Sunny Moraine, whose short fiction has appeared in multiple Year’s Best anthologies, her debut short fiction collection Singing With All My Skin and Bone (available from Undertow Publications). She shared two short stories, the first, “Eyes I Dare Not Meet in Dreams,” “by chance” involved refrigerators, and ran last week on Tor.com. A dead girl climbs out of a refrigerator, followed by others; they swarm, spread out, terrorize (certainly intimidate), and soon infiltrate popular culture, from “reality” shows to Law and Order: SVU (“a different type of dead girl”).

Her second offering was the title story from Singing With All My Skin and Bone, which she had never read aloud before. It was, she said, “the most intensely personal story [she] ever published.” A young witch’s pain and scars awaken “flesh and blood magic.” The story was disturbingly captivating, a stunning contrast from her other story’s satiric absurdity. (“That was a brave thing to get up and read in public,” said one audience member.)

After an intermission, co-host Ellen Datlow opened the second half of the program by giving away two anthologies, exhorting us to thank the Bar by buying drinks, and introducing the next reader. 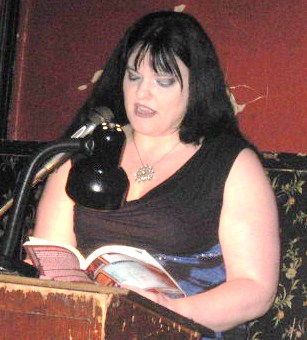 Catherynne M. Valente is the New York Times bestselling author of over 30 books of fiction and poetry, including Palimpsest, the Orphan’s Tales series, Deathless, Radiance, The Refrigerator Monologues, and the crowdfunded phenomenon The Girl Who Circumnavigated Fairyland in a Ship of Her Own Making (and the four books that followed). She has been a finalist for the Nebula and World Fantasy Awards, and has earned the Andre Norton, Tiptree, Prix Imaginales, Eugie Foster Memorial, Mythopoeic, Rhysling, Lambda, Locus, Romantic Times and Hugo Awards, and, just this week, the 2017 Theodore Sturgeon Memorial Award (for “The Future is Blue”). (She tweeted: “OMG you guys I won the Sturgeon Award! I’m a real science fiction writer now!”)

“To continue the cold storage theme” of the evening, she read a selection from The Refrigerator Monologues, which she described as “The Vagina Monologues for superhero girlfriends.” Though she didn’t elaborate further, there is a distressing tendency in superhero comics for women – wives and girlfriends of superheroes and female heroes – to be victimized, assaulted, crippled or murdered as a plot point to motivate male superheroes so that their storyline may progress. The exemplar is Alexandra DeWitt, Green Lantern Kyle Rayner’s girlfriend, who literally was “refrigerated,” killed and stuffed into a fridge by a supervillain. (The term “Women in Refrigerators” was coined by Gail Simone, and Valente co-dedicated the book to her.) Then there’s Gwen Stacy in Spider-Man (indeed, her fate in The Amazing Spider-Man 2 “pissed me off,” said Valente elsewhere, and inspired her to “throw art in its face”) and Barbara Gordon, the first Batgirl (see The Killing Joke), and two words: Lois Lane. The Refrigerator Monologues is a series of six linked stories from the perspectives of these women – they call themselves the Hell Hath Club – who meet in the Underworld (in the sense of the Afterlife, not the criminal world), in the Lethe Café in Deadtown, and share their tales of woe.

At the back of the room, copies of The Refrigerator Monologues and Singing With All My Skin and Bone were for sale by the Word Bookstore of Greenpoint, Brooklyn (and also Jersey City).

Prior to the reading, Datlow, as usual, whirled through the room, taking pictures. Her photos of the event may be seen on her Flickr page, linked to the Series’ website.