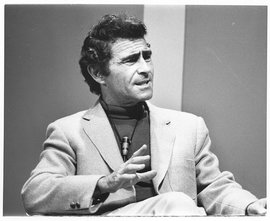 Ironically, by the standards of the day Serling’s early accomplishments as a writer ought to have elevated him above dabbling in science fiction, as Marc Scott Zicree, author of The Twilight Zone Companion, explains:

He created a new form of television… Science fiction was basically viewed as kids’ stuff. There is a great interview that Mike Wallace did with Rod just prior to The Twilight Zone where he says to Rod, “Now you are doing this kind of kids’ stuff, are you giving up writing anything important?”

Serling had not given up writing about the world’s crises.

He would script what is generally regarded as the bleakest Christmas movie ever made, an adaptation of Dickens’ “A Christmas Carol” about the horrors of nuclear war. Aired in 1964, “A Carol for Another Christmas” includes a visit to Hiroshima. The leads were played by Sterling Hayden, Peter Sellers, and Britt Ekland.

3 thoughts on “Remember Another Child Born on December 25”