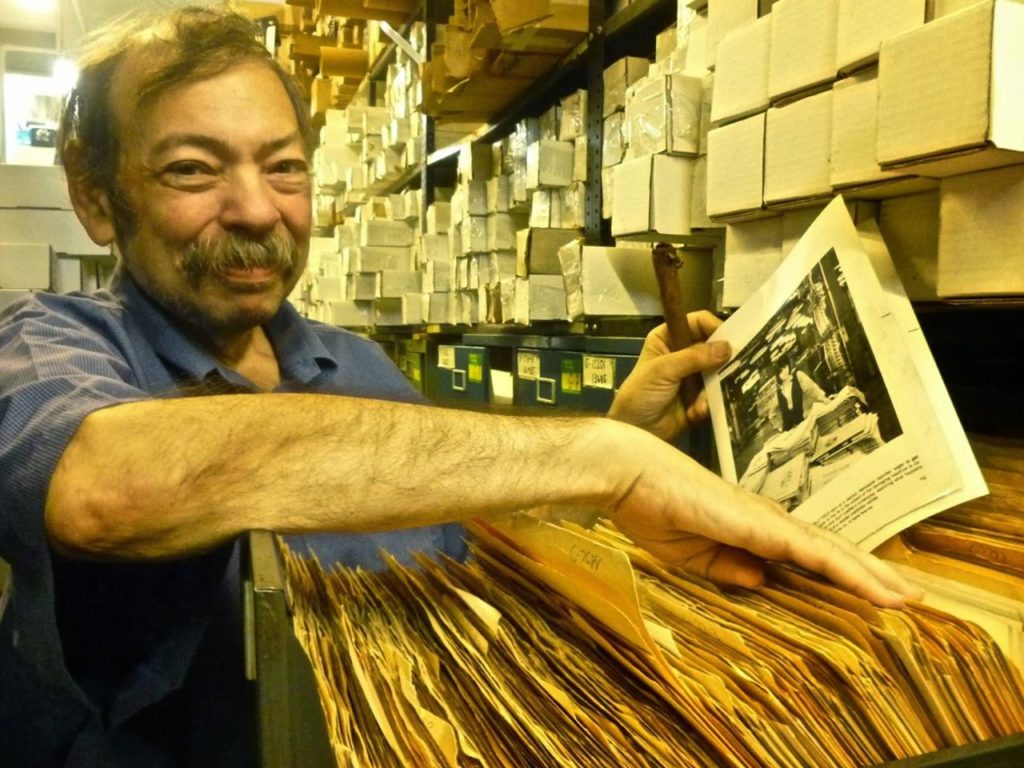 By Steve Vertlieb: Jerry Ohlinger, who died November 12 was, perhaps, the first movie memorabilia dealer that I ever met or had dealings with. I entered organized fandom in the Fall of 1965 when my brother and I were invited by Forrest J Ackerman to attend the very first Famous Monsters of Filmland convention at Loew’s Midtown Manhattan Motor Inn in New York City. Jerry, along with Steven Sally, were very much a presence in the mid-sixties in New York, and their movie memorabilia shops were popular havens for movie geeks like myself who wanted to own a particular still, poster, or pressbook from our favorite films. Visiting Jerry Ohlinger’s Movie Memorabilia Shop became a singular rite of passage for anyone on the East Coast aspiring to be a serious movie collector. If you didn’t know Jerry, then you weren’t really a “fan.”

Jerry was very personable and friendly, as well as a wealth of knowledge and anecdotal information. As I grew comfortably into the passion of collecting half a century ago, Jerry became one of my principle contacts for source materials. I visited his shop in Manhattan periodically, and grew to enjoy a relationship with him over the years. In these mildly prehistoric days of early collecting, Jerry Ohlinger became the Monstrous maven who guided us through fannish heaven as we came to understand that virtually anything that we wanted, any significant piece of movie collectable, was available for a nominal fee. Jerry was, perhaps, the East Coast godfather for collectors of all shapes, sizes, and bank accounts.

Jerry was a warm, friendly guy with endless patience and a huge heart. He was especially good, kind, and generous to the remarkable cast of characters who worked for him … often housing, feeding, and caring for them when times were lean. These included Ray Pence who lived in the Roxborough section of Philadelphia for a time, and Mike Woodin who both became good pals and chums. Their presence at numerous conventions was always both reassuring and somehow comforting.

My ventures into the big apple had grown infrequent by the early eighties, but I would still bump into Jerry regularly at neighboring conventions in Philadelphia and New Jersey, and Jerry (though growing older like the rest of us) remained a warm, patient, and reassuring presence in my life. I hadn’t seen Jerry in years when I learned, to my infinite sadness the other day, that Jerry had lost his long battle to cancer. I was probably only in my late teens or early twenties when first I encountered the remarkable Jerry Ohlinger. I’ll turn seventy-three in mid December. Jerry Ohlinger occupied my thoughts, my memories, my heart, and my life for much of the past half century. His tutelage and warmth will ever remain firmly ingrained in my journey through fantasy, horror, and science fiction fandom. I was but a mere lad when first we met. I owe much of my life’s passion for collecting to you. Rest In Peace, old friend. My thoughts, memories, and my enduring affection go with you.