Ray Bradbury died on June 5 a year ago. John King Tarpinian’s memorial pilgrimage today included several stops, including the basement of the UCLA Library where Ray typed Fahrenheit 451 on a rented typewriter. 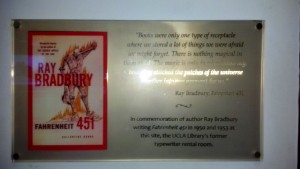 John says by the time he climbed all the way down there it was hard for him to hold the camera still. But it’s the thought that counts.

Meantime, an optimist on eBay is offering a copy of the newly released special 60th anniversary paperback of Fahrenheit 451 for $1,505 and the Swann Auction Galleries will soon take bids on the book’s 1953 “Johns-Manville Quinterra Asbestos Edition” worth an estimated $6,000-$9,000. 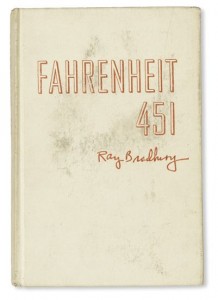