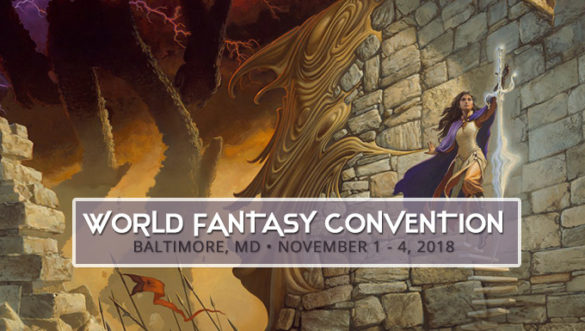 If you want to know how a World Fantasy Convention differs from your typical convention, here is what happened when I checked in on Thursday.

I was running late, and after getting to the con, getting to my hotel, and getting to the Renaissance Hotel where the con was held, it was 8 PM.  Registration closed at 7.  I felt very tired and frustrated.  I was going to miss the opening ceremonies.

Then a member of the Washington Science Fiction Association who I didn’t think particularly liked me said, “Why don’t you walk right in?”

What?  No security?  No badge checks?  No cops?

Welcome to the World Fantasy Convention, where everyone is civil.

Here’s another example.  I was taking a nap Friday afternoon in a chair in the central area of the convention, and woke up, and who was sitting next to me but Michael Whelan (Michael Whelan!) signing some paperbacks.

I’ve been to six World Fantasy Conventions, and I think their purpose has changed.  They were founded in 1975 to do two things:  make sure that fantasy was as respectable as sf, and be a place where writers, editors, and publishers could congenially conduct business.

Their first goal, of course, was achieved decades ago and fantasy is more popular than sf.  As for the convention, there were as many writers as ever, including blue chips such as John Crowley and Joe Haldeman.  But there weren’t as many editors, even though Baltimore is a two-hour train ride from New York.  Ellen Datlow, Sheila Williams, and Gordon Van Gelder were there, as were Irene Gallo and Tom Doherty of Tor.  I don’t think there were many other major book editors there; Patrick Nielsen Hayden in particular was conspicuous by his absence.

All the lavish parties thrown by big publishers have disappeared with one exception.  For the past 35 years, super-agent Howard Morhaim has held a black-tie dinner at the World Fantasy Convention.  He held one this year.  If you’re successful enough that you regularly attend black-tie dinners, you got an invitation.

The World Fantasy Convention is known for three things:  its con suite, its art show, and its dealer’s room.

First off, the con suite was outstanding.  You pay a lot for a World Fantasy Convention membership, but part of the deal is that the con suite has real food.  I had four meals there, and everyone who worked that room gets a big thumbs up from me, and whoever made the barbecue on Saturday night gets two thumbs up.

I was disappointed in the dealers’ room.  Part of what makes a World Fantasy Convention special is that the dealers have rarities you don’t see every day.  But most of the dealers had more normal books.  However, Greg Ketter of Minneapolis’s DreamHaven Books had some finds.  He had a copy of The Outsider and Others that you could pick up and flip through—but very carefully, since the book sells for $5,000.  In a case he had a copy of the first edition of Again, Dangerous Visions in a dust jacket signed by 14 contributors for $600.

But Ketter’s prize was a first edition of a cheesy 1967 paperback called Pleasure Planet (“the whole world was obsessed by the pleasures of sex”), the first novel by Robert E. Vardeman.  Vardeman signed his novel with an inscription so tasteless, so depraved that I dare not repeat it in a family blog.  But you can find out what Vardeman wrote for $75!

Here’s a book I couldn’t find.  Ursula K. Le Guin was interviewed in the last year of her life about writing; the interviews have been published this summer by Tin House Books as Ursula K. Le Guin:  Conversations on Writing.  No dealer had this book.  Don’t they think customers would be interested in Le Guin?

I didn’t spend as much time in the art show as I should have, but it was large and filled with art by Guest of Honor Tom Kidd as well as Donato Giancola.  Another theme was about women in sf and fantasy and featured paintings featured as covers on books and magazines, many from the collections of Edie Stern and Joe Siclari.  I am told there was an original Margaret Brundage painting there, but I didn’t see it.

As for panels, I didn’t see as many as I should have because I was having too much fun chatting with fans.  I learned everything from why Latter-Day Saints don’t have any crosses in their churches to what it was like to film monster movies in Hamilton, Ontario.  (The director, Catherine Whitlock, was wearing a t-shirt promoting her film Vampire Dentists—you know, they drill by day and suck at night.)

I also heard this story about Dragon Con.  Early in the convention’s history, Dragon Con shared a hotel with the Salvation Army.  The Sally Anns made prune faces at the cosplayers, but the Sallies had a parade.  Dragon Con organizers thought a parade was a splendid idea, and the parade is a highlight of Dragon Con.

I also learned lots of new words.  A “chapterbook” is a book for beginning readers who have graduated from picture books.  It isn’t very long, but it has chapters, just like the ones older readers devour.  A “plot bunny” is a plot thread that diverts people writing their novels in November for National Write Your Novel Month from plowing forward to get their 50,000 words done.  Plot bunnies need to be crushed.

Finally, two winners of World Fantasy Awards thanked their “beta readers.”  I don’t know why this term is better than “friends in my writer’s group.”

As for panels, I saw the part of the opening ceremonies where toastmaster Linda Addison provided fun facts about the guests of honor.  Aliette de Bodard lived in a tiny apartment in Paris with a toddler, a husband, and “Lovecraftian plants.”  Tom Kidd has a lifetime passion project called “Gnemo,” which I gather is neither about Captain Nemo or Winsor McCay’s Nemo.  Scott Edelman was a Stoker finalist seven times…

I was impressed by the way moderator Lee Modesitt steered a discussion about politics in fantasy to avoid all minefields, particularly when an audience member mentioned a novel by John Ringo and Tom Kratman whose premise seemed particularly dopey. Modesitt ended the Baen Books discussion very quickly.  Modesitt, who served in the Reagan Administration, noted that when he puts politics in his sf he gets plenty of comments, but no one notices the politics in his fantasies.

The high point, however, was Russian émigré Anatoly Beilkovsky, who, when asked if Animal Farm was a political fantasy, said, “I consider it nonfiction.”  Beilkovsky noted that Russians have a hearty appetite for trashy alternative history, such as a series where a submarine travels from today to 1942 solely to kill Admiral Hyman Rickover.  Beilkovsky added that there were commanders on both sides of the conflict in Ukraine who, before the war, wrote military sf novels.  They may be fighting today, but before the war these novelists “used to party together at conventions.”

At the panel on audiobooks, Simon Vance, a British narrator now living in San Francisco who has won a ton of audiobook awards, impressed me.  Vance carefully prepared for every project.  He was the reader for Alan Moore’s Jerusalem, and asked Neil Gaiman for advice. Gaiman said that Moore’s giant novel was set in Northhampton, and Vance needed to talk to Moore and see some of the landscape Moore used for his novel.  So four days before he started, he got on an airplane, went to England, interviewed Moore and saw some of the landscape that Moore used. Then he flew back to San Francisco and began recording Moore’s book, which takes 60 hours to listen to.

The World Fantasy Awards were a dour affair.  One of the themes of the convention was “safe havens,” and Linda Addison explained how she found the world of science fiction and fantasy a safe haven from the fools and trolls who routinely harass her.  At least three winners—including Canadian Charles de Lint—urged members to vote on Tuesday, with Betsy Wollheim saying that she was an editor, “so please pick up your editorial pens and vote.”

Someone needed to tell at least one joke to break up the gloom.  So when Gordon Van Gelder announced that there would be a panel where the World Fantasy Awards judges explained their decisions, I shouted, “Omigod!”

“Yes,” Van Gelder said, “it’s always interesting to see how the sausage was made.”

Then I got my luggage and went home.

16 thoughts on “Report on the 2018 World Fantasy Convention”