The last year has been a struggle for Richard. Parkinson’s disease, first diagnosed in 2009, has so weakened him that he is unable to meet the demands of a comic strip. For a time, he worked with another artist, but the deadlines became too much of a task.

Thompson said about his illness:

At first it didn’t affect my drawing, but that’s gradually changed. Last winter, I got an excellent cartoonist, Stacy Curtis, to ink my roughs, which was a great help. But now I’ve gotten too unreliable to produce a daily strip.

Since Thompson was diagnosed with Parkinson’s in 2009 friends and fans have been encouraging and supporting him through Team Cul De Sac.

In June, an auction of art by his friends raised $50,000 – among the items an oil painting by Bill Watterson (“Calvin and Hobbes”) of “Cul de Sac’s” Petey Otterloop. Watterson explained, “I thought it might be funny to paint Petey ‘seriously,’ as if this were the actual boy Richard hired as a model for his character.”

Michael Cavna, who writes the Comic Riffs blog for the Washington Post, interviewed Thompson about ending his strip: 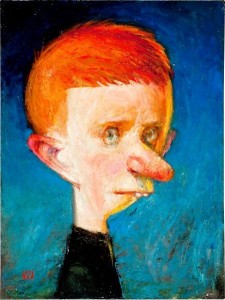