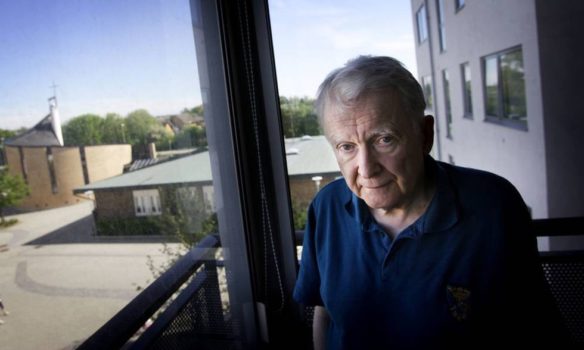 By Ahrvid Engholm: A giant of the Swedish sf field has passed away. Bertil Mårtensson died in hospital Sunday November 4 from effects of smoke inhalation, after a fire in his home broke out the Thursday before. He was in bad health the last few years from severe diabetes and rather immobile, which may have contributed. He was 73 (born in 1945).

Bertil Mårtensson entered sf fandom in 1961 and began being published in fanzines as well as doing his own (one title was Ogre). Together with John-Henri Holmberg and Mats Dannewitz Linder he formed the fannish group WDVF (Witterhetssällskapet Din Vän Fandom) which in the 1960s did a series of satirical, witty fanzines under different titles, now considered classics. The group also edited and contributed to SF Forum, the leading fanzine from the Scandinavian SF Association – a heavyweight publication, at present the only Swedish fanzine still being done on paper – at times with Bertil as sole editor. His last issue as SF Forum editor came in 2002. He was also Guest of Honour of several conventions.

He made his literary debut with a short story in the prozine Häpna! in 1963 and his novel debut in 1968 with Detta är verkligheten (“This is the Reality”), oddly enough first published in Danish in April that year (translated by Jannick Storm) but in Swedish not until September the same year. The novel was given the 1972 Eurocon Special Award and was followed by many other titles. Notable ones are Skeppet i kambrium (“The Ship in Cambrium”, 1974), Samarkand 5617 (1975), Jungfrulig planet (“Virgin Planet”, 1977) and the fantasy trilogy Maktens vägar (“The Roads of Power”, 1979-1983; revised in 1997). He also wrote crime fiction, of which his novel Växande hot (“Growing Threat”, 1977) was awarded the 1977 Sherlock Award as the best Swedish crime novel that year. For a list of his around 20 titles (but excluding his academic non-fiction) see the Wikipedia entry for Bertil_Mårtensson.

Four of his short stories have been translated to English, beginning with “A Modest Proposal” in the New Worlds 7 anthology, 1974, but many more have been translated to French and other languages. He is translated to Danish (as noted), German, Spanish, Italian, Czech and Croatian. (I find info, though, that he had a poem in English already in June 1966, in an issue of Leland Sapiro’s Riverside Quarterly, which shows international fandom contacts early on.) His literary output shrunk when his academic career as philosopher took over, as assistant professor of Umeå University and head of the philosophy department of Lund University 1988-1993.

Yours Truly remember meeting Bertil for “real” the first time during a long conversation at a breakfast table with him and his wife Bodil (they divorced in 2005) on my third sf con, Bacon 1978 – though he must have been present also on the 1977 and 1976 cons I went to. Later, in 1981, we had the fake-Nazi scandal about the Lund Fantasy Fan society (LF3), where Bertil had been chairman. He wrote a sharp letter in the student paper telling them to take their made-up story and stick it up their…fake news existed already them. In my Fandboken I note how Bertil “slaughtered the ‘scoop’…speaking as a founder of LF3 (the club accused of being Nazi in Lundagård /the student paper/), in a letter to the editor which went through the story point by point”. (The student paper editor – following the old motto “don’t check a good story, it may be debunked!” – later became editor-in-chief of one of the biggest newspapers, but was a laughing stock in fandom.)

As Bertil lived far down south I met him rather seldom (usually on a con), last time must have been when he was GoH on the 1999 jUnicon. Before this, in the early 1990’s we were in touch as I made a VHS with Swedish fandom’s amateur films, and included Bertil’s “Tidsmaskinen” (“The Time Machine”). It’s an 18-minute-long 8-mm production from the mid-1960’s. The film where Bertil plays the main character exploring a disaster-struck, future world is available here: https://vimeo.com/12849707

Oddly enough I did later have some contacts with his ex-wife, Bodil Mårtensson, who began writing crime novels and has had quite a success with it (she has lately turned to historical novels). Bodil was for a while member of the Short Story Masters society I’m a member of too. Through her I heard a little about how Bertil was doing – but not entierly good news.

Bertil was also into music, played the synth and did cassettes – it began before recordable CDs – of his own compositions. Some of his music can be found here: https://soundcloud.com/flying-bird-produktion. Last time I tried to connect him with was through a friend who does a home page about Swedish filksongs and sf music. I didn’t get any reply.

Bertil Mårtensson – a fannish nickname was “Balte” – was multi-talented, a very fine writer, a true Big Name Fan and one of the pillars of Swedish science fiction. You’d better believe that he’ll be missed!