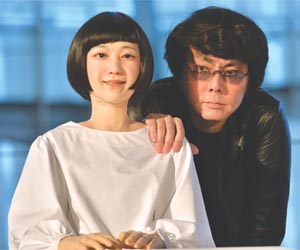 Japanese scientists have unveiled what they say is the world’s first news-reading android.

“Isn’t it just a little coincidental that this story breaks the same day that Diane Sawyer announces her retirement?” asks James H. Burns.

The adolescent-looking “Kodomoroid” — an amalgamation of the Japanese word “kodomo” (child) and “android” — delivered news of an earthquake and an FBI raid to amazed reporters in Tokyo.

She even poked fun at her creator, telling leading robotics professor Hiroshi Ishiguro: “You’re starting to look like a robot!”

The Space Daily article also reports Japanese customers will be offered a chance to purchase “a chatty humanoid called Pepper designed by SoftBank as a household companion” next year for around $2,000.