Between now and MidAmeriCon II people will expend a million words arguing whether Sad Puppies 4 is a slate or a recommendation list, a Hugo voter registration drive, an outlet for those frustrated with message fiction, a movement to oppose the dread SJWs, or all of the above.

“Introducing Sad Puppies Four: The Bitches are Back” …(also the Embiggening, and the Embitchening, given that I, Kate the Impaler, am Queen Bitch and I am ably seconded by Sarah, the Beautiful But Evil Space Princess, and Amanda, the Redhead of Doom, and we are all more than capable of going Queen Bitch when we need to).

Apart from that, the stated goals of Sad Puppies 4 include:

Expanding the number of Hugo voters —

The Hugo awards has entirely too small a voting and nominating pool. Five thousand votes is the largest number ever received? Two thousand nomination ballots? That’s piddly. For a field loved by millions, it’s nowhere near enough, and makes it easy for any small clique to corrupt the idea of awarding great SF and start giving themselves awards.

The tireless, wonderful volunteer Puppy Pack will be collating recommendations.

Hosting an SP4 website as the collecting point — http://sadpuppies4.org/

There will… be multiple permanent threads (one per category) on the SP4 website where people can make comments.

Later – most likely somewhere around February or early March, I’ll be posting The List to multiple locations. The List will not be a slate – it will be a list of the ten or so most popular recommendations in each Hugo category, and a link to the full list in all its glory. Nothing more, nothing less.

Being open to anyone, grudgingly —

SF is a big tent: we don’t want to kick out anyone, even writers of bad message fiction that makes puppies sad.

The three organizers will not appear on The List, however, they are not recusing themselves from being nominated. Paulk says, “If anyone wants to nominate any of us they’ll need to do it on their own.”

Paulk also says emphatically, “there is NO political test.”

She calls for people to recommend things only if “you’ve read it/watched it/seen it and you think it’s one of the best in its Hugo class published in 2015.” 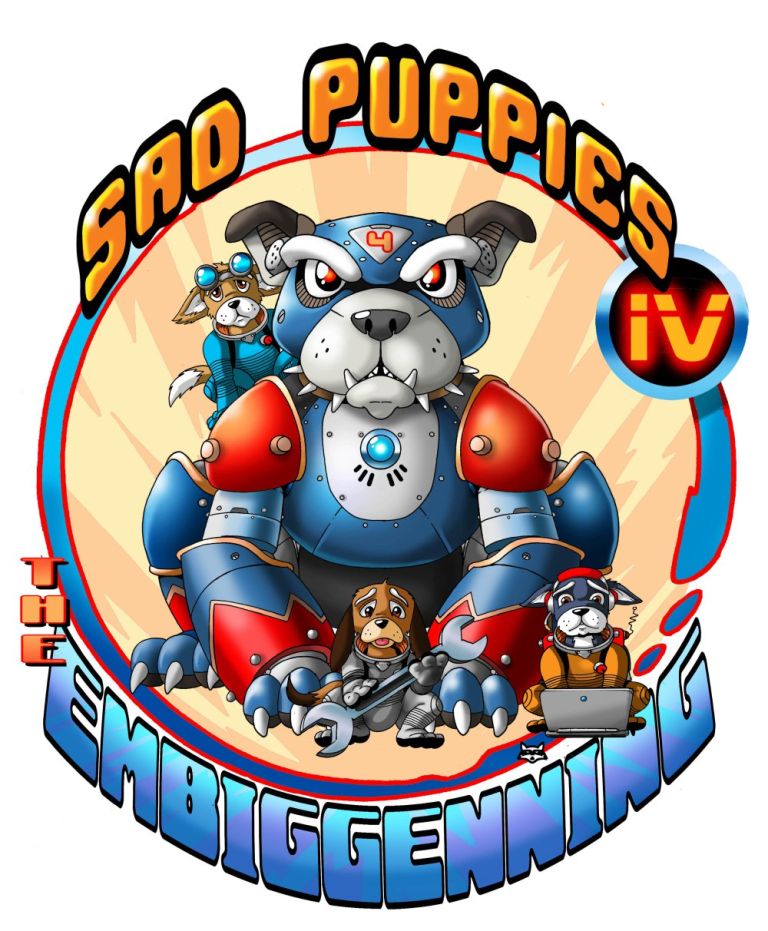 ArtRaccoon (Lee Madison), who did logos for SP3 and Vox Day’s Rabid Puppies slate, has created the Sad Puppies 4 logo. In a comment, the artist explained each of the dogs has a name —

Issac is at front checking over the systems start up, probably worrying about not making the Robomutt Robert “Three Laws Safe”. Frank is the one on the laptop…totally violating the tenets of the Butlerian Jihad, and Ray is on Robert’s back checking his welding job.