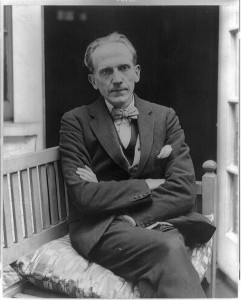 The author of Winnie-the-Pooh, like Tolkien, served in the British Army in World War I. Their wartime experiences involve some interesting coincidences.

Both A. A. Milne and J. R. R. Tolkien were trained as signals officers.

Both Milne and Tolkien participated in the Somme offensive of 1916. That was not such a great coincidence in itself. The campaign lasted several months, spanned perhaps 15 or 20 miles of trenches, and the British casualties alone exceeded 400,000, so no telling how many troops were involved altogether.

I had my men out on a little hill one morning and was walking, as usual, from station (he was a signalling officer) to station to see how the messages were coming through. It was a warm November day, so warm that each station seemed a mile rather than a few hundred yards from the next, and I wondered how I could drag my legs there. At lunch in the HQ mess I went to sleep; spent the afternoon and evening sleeping in front of the stove; and when I went to bed was given the usual couple of aspirins by the M.O. Next morning my temperature was 103. The M.O. went off to arrange for an ambulance to take me to the clearing station. By the time I was introduced to it again the thermometer was soaring to 105. Next day the battalion got the order to move; the attack was to begin. My sergeant came to say goodbye to me. I handed over my maps, commended the section to his care, wished him luck, and went to sleep again. He was lucky. He only lost a leg. Ten days later I was at Southampton. Some kind woman offered to write a telegram for me. It was to [my wife] Daphne, saying that she would find me in hospital at Oxford. I woke up one afternoon and saw her at the end of the bed, crying.