An executive order by President Trump reestablishing the National Space Council is already written and is likely to be formally issued in the near future, a key advisor said May 1.

The recreation of the council, which last operated during the administration of President George H.W. Bush a quarter-century ago, could play a key role fostering the development of so-called Ultra Low-Cost Access to Space (ULCATS) systems, said attendees of a symposium here on the subject.

“The recommendation coming out of the Trump campaign to create the National Space Council is going to happen,” said Robert Walker, the former chairman of the House Science Committee who served as a space policy advisor to the campaign last fall. “It’s a way of ensuring that the nation’s resources are all directed towards national goals.”

(2) Planet cloaking technology, and why we should use it. “Why And How Aliens May Know Humans Exist”.

What would it take to hide an entire planet? It sounds more like a question posed in an episode of “Star Trek” than in academic discourse, but sometimes the bleeding edge of science blurs with themes found in science fiction.

Of course we’ve been leaking our own position to distant stars via radio and television signals for six decades now, largely ignorant of the cosmic implications. But several notable scientists, such as Stephen Hawking, have publicly voiced concerns about revealing our presence to other civilizations. These concerns largely draw from the darker chapters of our own history, when a more advanced civilization would subjugate and displace a less advanced one.

It might be too late for us to withdraw back into invisibility, but maybe not for other intelligent alien civilizations out there. A far-off planet’s inhabitants might prefer to hide from the likes of us. Recently, my graduate student Alex Teachey and I published a paper that proposes a way to cloak planets, as well as a way to broadcast a civilization’s existence. Even if we’re not manipulating our own signal in this way, it doesn’t mean other planets out there aren’t. It’s possible what we see as we scan the universe for other habitable planets has been engineered to disguise or highlight the existence of other civilizations.

(3) Battlin’ bots. “Chinese inventors show off the gladiator robot they want to use to challenge the US’ ‘Megabot'”. (Video)

Chinese inventors have created a $14 million fighting robot called “The Monkey King”. This is the third “gladiator” robot to be revealed, after the US and Japan unveiled their models.

The team has officially challenged the US’ “MK III Megabot” to a duel, but will have to wait until after an announced fight between the US and Japan’s Kuratas. Both creators are touting the duel as “the world’s first public giant robot fight” and hope to make it a worldwide phenomenon

Space discovery has been an enduring source of national pride, since Project Mercury and the Vostok Program first competed to put men into orbit in the 1950s and ‘60s. In recent years, new players have taken prominent roles in ambitious missions, including space tourism and missions to Mars. At this junction in space exploration, The Atlantic will convene “On the Launchpad: Return to Deep Space,” a summit gathering policymakers, key players from NASA, and space industry experts to explore the future of extraterrestrial travel on Tuesday, May 16, at the Newseum in Washington, D.C.

Senator Ted Cruz (R-TX), chairman of the Senate Subcommittee on Space, Science, and Competitiveness, will be interviewed at the event. Discussions will also include acting NASA administrator Robert Lightfoot on the future of NASA, and former NASA chief scientist Ellen Stofan on what it would take for the U.S. to launch a mission to Mars. Chris Carberry, the CEO and co-founder of Explore Mars, Inc and Dr. Robert Zubrin, founder of Mars Society, will discuss the science of getting to the red planet.

(5) “Scientists should just be political.”  –  The Atlantic. “The Case for the Politicization of Science”.

“… It is a miserable time for science. America has an almost non-existent climate policy, its support for basic research is flagging, and its congressmen harass individual scientists in the name of ideology …”

“… Now, that remarkable and fictional woman—the discovery-obsessed doyenne whose face is in every public library in America—was here, on a sign, in the rain, near the White House, protesting a president who brags about grabbing women’s vaginas. I felt bad about the shabbiness of the whole scene, and I felt bad specifically for Ms. Frizzle, who, after a lifetime of teaching third graders, has to spend her twilight years doing … this …”

“… The problem of our political system isn’t an insufficient love of science. Sixty-seven percent of U.S. adults think scientists “should have a major role in policy decisions,” as do nearly half of self-identified conservative Republicans. When you set aside the issue of climate change, Americans of both parties do equally well on tests of basic scientific literacy …”

“…  So if scientists want to do politics, they should do it all out. They shouldn’t worry about the stain of asserting their self-interest. They should take chances—they should get messy.”

(6) They fought the law. “Canada fought the war on science. Here’s how scientists won.” 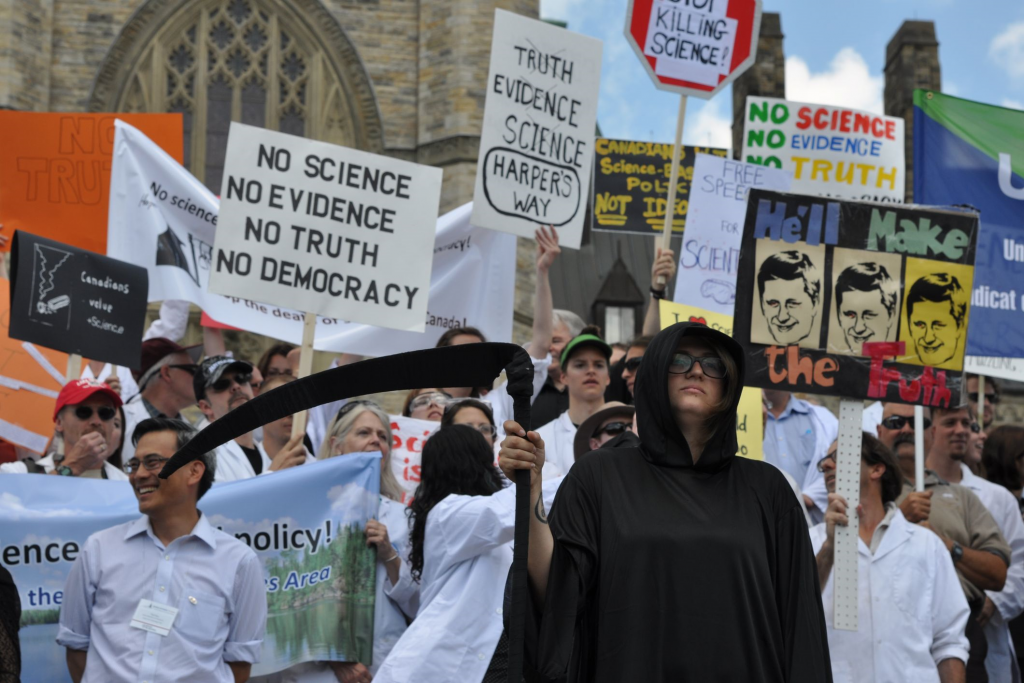 Chris Turner is the author of The War on Science: Muzzled Scientists and Wilful Blindness in Stephen Harper’s Canada

For Canadians like me, the March for Science, in particular, brought not just encouragement but a sense of déjà vu, tinged with relief. For President Trump is not the first chief executive of a major Western nation to wage a war on science. Until Stephen Harper’s Conservative government was voted out of power in 2015, it spent nearly a decade as the free world’s chief aggressor on this front. Under Harper, the Canadian government waged a steady attack on science and data the administration deemed unnecessary or unhelpful to its agenda. Harper cancelled the long-form census — the government’s most important data-gathering tool — and slashed budgets for climate science programs. He mothballed vital environmental research labs and rewrote environmental protection legislation in the fine print of budget bills.

… In the summer of 2012, in the wake of the introduction of Harper’s most aggressively anti-science budget, a few hundred protesters marched from an Ottawa conference center hosting a biology symposium to Parliament Hill, in a protest styled as a mock funeral for the Death of Evidence. As in the March for Science last weekend, many of the Ottawa marchers were working scientists who’d never before participated in a protest. Many wore white lab coats to signal their allegiance to a set of principles long assumed to be above the partisan fray.

Five years later, the Canadian government and its institutions are back in the hands of leaders who respect the scientific method and value the expertise of scientists on their payrolls (and beyond)….