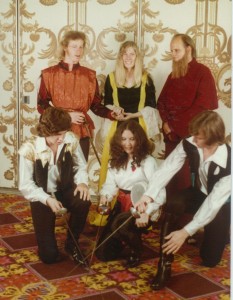 His expertise in several fannish specialties was well regarded. He was often assigned to moderate panel programming. He was a masquerade judge at the 2002 Westercon. As a role playing gamer he was respected for backgrounding his characters – even writing an original song for one that was a bard.

He participated in several of San Diego fandom’s large group masquerade entries in the 1980s, as Dworkin in the Royal Family of Amber at Westercon in 1980, Sun-Toucher in the Elfquest group at the San Diego Comic-Con of 1981, and the High Priest in the Egyptian Gods group at Denvention 2 in 1981.

In the 1980s he was contact person for the S.T.A.R./San Diego club and the Cair Paravel branch of the Mythopoeic Society.

In more recent years he was a director of San Diego Science Ficion Conventions, Inc.