San Diego Comic-Con International has been trying control the term “Comic-Con” term for decades. In August 2014 they filed suit in U.S. District Court against the owners of the Salt Lake City Comic Con claiming the name of Salt Lake City’s event is too similar. The San Diego con claimed SLCC had piggybacked on its “creativity, ingenuity, and hard work,” and by using the Comic Con name “intended to suggest, mislead and confuse consumers into believing that the Salt Lake Comic Con convention is associated with, authorized by, endorsed by or sponsored by SDCC.”

The judge, as is commonly done, prodded SDCC and SLCC to have settlement discussions and resolve the case without trial. This month the Salt Lake City defendants (which includes Dan Farr Productions [DFP], and Dan Farr and Bryan Brandenburg as individuals) traveled to San Diego to give depositions leading up to a final settlement conference. SLCC’s Bryan Brandenburg subsequently told the Associated Press there was no compromise forthcoming from court-mandated conference. SDCC says they’ll only accept SLCC licensing the name “comic con” for a fee. Read “substantial fee.”

The AP reports that San Diego Comic-Con declined specific comment on the case, though they said Utah organizers’ position is “without merit.”

Salt Lake City Comic Con has now moved for summary judgment, calling on the court to render a decision on the existing record. SLCC’s primary argument is that SDCC has no rights to the generic term “comic con.” And if that’s not enough, mark history shows SDCC abandoned efforts to register “Comic Con” in favor of the hyphenated name “Comic-Con” and since SLCC does not use the hyphenated term in its name there is no infringement.

If summary judgment is not granted, or does not resolve all issues (as happened when a court issued a decision in the Dr. Seuss/ComicMix suit) the case could go to trial in the fall.

Brandenburg has continually appealed to the public, colorfully asking for “support from the community and all the powers of the Universe to bring victory to us in this case.” Three weeks ago he posted on Facebook the arguments in his defense; he asserts that the facts therein “are undisputed.”

1) Comic-Con International does not have a trademark for “Comic Con”. They tried to get it in 1996 but Chicago Comicon and Motor City Comic Con opposed the trademark and San Diego abandoned it. https://goo.gl/QXXSul Here is the DEAD trademark https://goo.gl/nWcByy

2) San Diego did not originate the name “comic con”. By the 1960’s, American (and British) comic book collectors were gathering for events that they called comicons, comic cons, comic conventions. In 1966, three comic cons were held in New York City alone, where comics originated. It wasn’t until 1970 that the Golden State Comic Book Convention was organized…and it wasn’t until later that it was called Comic-Con International.

3) In the 1990’s, SDCC had decided it should OWN the generic cultural terminology and began to process a series of applications for register marks but claimed they used the phrase and mark “exclusively” according to trademark applications. This was a false claim that was made on their trademark applications as there were many comic cons by this time and they did not originate the term.

4) Comic-Con, “Comic Con” and “Comic-Con” are generic and the trademark office should revoke SDCC’s trademarks not only because they are used generically in popular culture, but because their trademarks were obtained by falsely claiming exclusive use of the marks. They are generic because these terms identify a type of event, not any particular event or producer.

5) Furthermore, SDCC abandoned any rights it might have had by granting a naked license to at least one major comic con event. This means the license did not have sufficient oversight or controls. They also did not police said trademarks between 1995 and 2014 with comic cons all over the country that were non-affiliated and non-licensed.

7) Salt Lake Comic Con has never used “Comic-Con” to describe it’s convention, but that doesn’t matter because many events around the country and the world use “comic-con” as part of their name and until SDCC filed their lawsuit in 2014 against SLCC they did NOT make most if not all of the comic-cons change their name, sign a license agreement or adhere to any type of standards or oversight. When they were forced to abandon the trademark for “comic con”, they then secured “comic-con” and have used it from that point forward.

8) “Comic Con” is generic and unprotectable. “Comic Con” simply denotes a comic con. Comic con is a noun indicating what an event is, not whose event it is. Even Wikipedia states “Comic con is any comic book convention.”

9) Salt Lake Comic Con relied on the fact that the “comic con” trademark was abandoned combined with the fact that every comic con outside of SDCC we talked with had no agreement with SDCC and asserted that “comic con” was generic.

10) SDCC’s trademarks should be canceled because they did not originate the term “comic con” AND they obtained them by falsely claiming exclusive use.

He has also made available redacted copies of SLCC’s latest court filings.

While litigation is always emotional, some say what really got SDCC’S goat was having the Salt Lake Comic Con’s garish “Tony Stark”-like Audi driving around downtown San Diego during their Comic-Con in 2014. The suit was filed a month later. 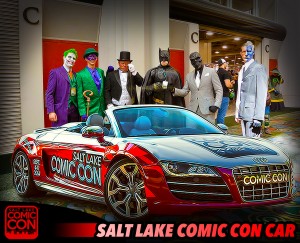 [Thanks to Dave Doering and Kate Hatcher for the story.]