Become a fantastic character, take away something beautiful and unique, or get killed (fictively) by your favorite author at the Charity Auction hosted by the Science Fiction and Fantasy Writers of America (SFWA) at this year’s Worldcon on Sunday, August 23, at 1 p.m. in Convention Center Hall C – Guinan’s Place.

Some offerings have special connections to this year’s Worldcon: 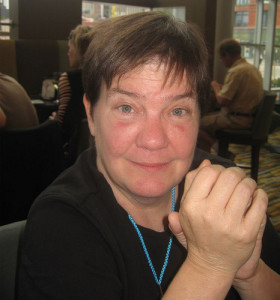 Nebula Award winning writer Ellen Klages serves as auctioneer for the hour-long event. Klages says, “An auction is like a shopping cabaret, bread-and-circuses with prizes. You are entertained, you laugh, you come away with one-of-a-kind treasures. And…your donations support SFWA’s efforts to help writers in need. A win-win-win.”

Proceeds go to the SFWA Givers Fund, which funds the SFWA Emergency Medical Fund, Legal Fund, and other grants.

Steven H Silver, Events Coordinator, says, “SFWA has been holding charity auctions (and accepting the proceeds from other charity auctions) for as long as SFWA has had its Emergency Medical Fund and its Legal Defense Fund. These auctions give SFWA the opportunity to ensure these funds remain solvent and at the same time give readers and fans an opportunity to interact with their favorite authors in a variety of ways and come away with oftentimes unique items.”

Founded in 1965 by author Damon Knight, SFWA is a professional organization for authors of science fiction, fantasy, and related genres. SFWA informs, supports, promotes, defends and advocates for its members as well as for professional genre authors at large.