This shark has legs! Syfy announced Sharknado 4: The 4th Awakens will premiere July 31.

Sharknado 4 will take place five years after the East Coast was ravaged in Sharknado 3. Fin, his family and the cosmos have been blissfully sharknado-free in the intervening years, but now sharks – and ‘nados! – are being whipped up in places (and ways) that are completely unexpected…

Syfy’s announcement on May 4 – appropriate considering the title — was missed here for the very reason that we were busy telling one another “May the Fourth be with you.”

A Star Wars-style poster was released as well. 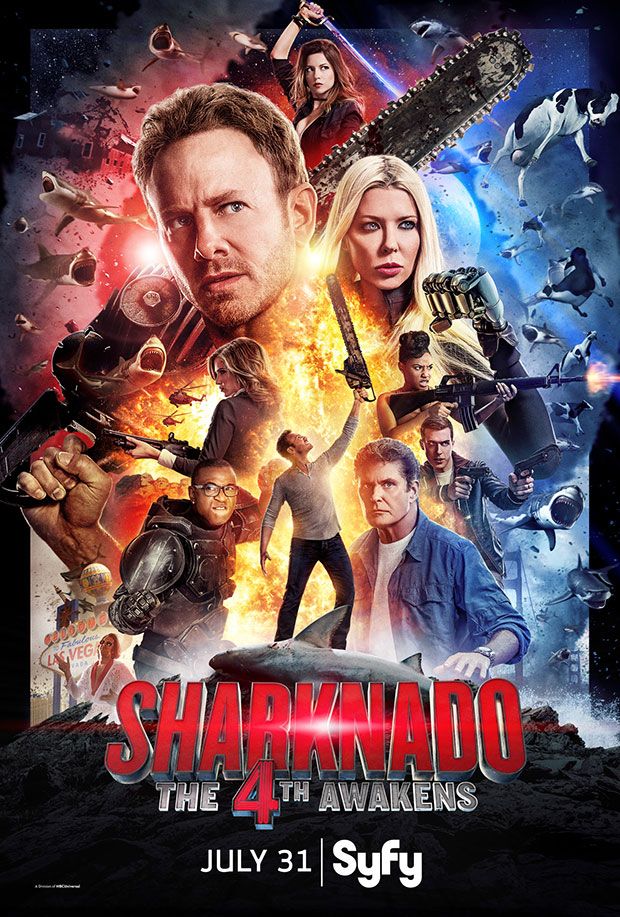 The poster’s symbolism has been intently scrutinized by Syfy’s learned bloggers:

Cue the intense speculation . . . what can we learn about the movie from this intense action-heavy poster? Well, Finn, April and The Hoff are back, although it would appear that April is half the woman she once was, operating with a sweet bionic arm. Hitting up the corners clockwise from the lower right we can catch glimpses of The Golden Gate Bridge, perhaps “The Dude” dressed up as Elvis in Las Vegas, a red barn/house going all Wizard of Oz in the Sharknado, and then finally (hey diddle diddle) we’ve got cows jumping over the moon. Interesting…

Yahoo! News listed all the celebrity cameos. None are closely related to sf/f, unlike Sharknado 3 which balanced the books on the Red Wedding by having George R.R. Martin eaten by a shark.

The celebrities appearing in Sharknado 4 are: