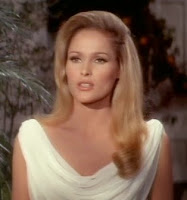 By James H. Burns: She was one of the very first film actresses who mesmerized me.

But She, from Hammer Films, based of course, on the H. Rider Haggard novel.

Somehow, the 1960s film had wound up in a syndication package on a local New York TV station just a few years later, and as a toddler, I was introduced to some more wonders of fable–

And the enchantments of:

She turns 79, today, which somehow seems extraordinary, for someone who lives in so many of our minds as an exquisite image of feminity, and one of the icons of that era’s unique blend of fantasy and science fiction.

She had been pals with James Dean in Hollywood n the 1950s…  But more unknown is the tale that when offered the first James Bond movie, she and her then husband John Derek were paying a visit to Kirk Douglas in Paris… Andress was unsure whether to take the role of Honey Rider, and it was the great Douglas who suggested it could only be fun to film in Jamaica, and an opportunity…

There was The Tenth Victim, based on the Robert Sheckley story, and more memorable imagery…

…Red Sun, a Western, with Charles Bronson and Toshiro Mifune, which while not “genre,” still seemed otherworldly.

And then she played Aphrodite, in the Ray Harryhusen opus, Clash of the Titans, which actually had a small impact on my personal life: I wound up dating, shortly, just before that film’s premiere, the gal the movie’s star, Harry Hamlin, broke up with, she told me, when he fell in love with Ursula.

Was I a cad, as a teenager, to wish I had also been seeing this SCREEN goddess?

Andress’ particular charm, and talents, included seeming to break past such usual, and casual, depictions.

Unusual for any film actor, she seemed to transcend even the magic of the screen, and somehow, once she appeared, always been part of our pop cultural and interior mindscapes.

There were other fantasy films, and some very strange ultra-B movies, along the way.

But perhaps the best revelation across the decades, from virtually everyone Andress has known, is that she is as simply as lovely a person, as any illumination she ever cast through the light and shadow of celluloid.

In the “Bond Women” documentary produced and hosted by Maryam D’Abo, there’s a delightful sequence where the elder Andress takes D’Abo by the arm, as she’s showing her the streets of Rome…

To become immortal, and beloved, in one lifetime, is surely a transcendence that suggests a very particular gift, from whatever heavens, one may believe in.

Whether you’re in Ayesha’s realm, somewhere around Olympus, or right here on Earth.

2 thoughts on “She Who Must Be Remembered”