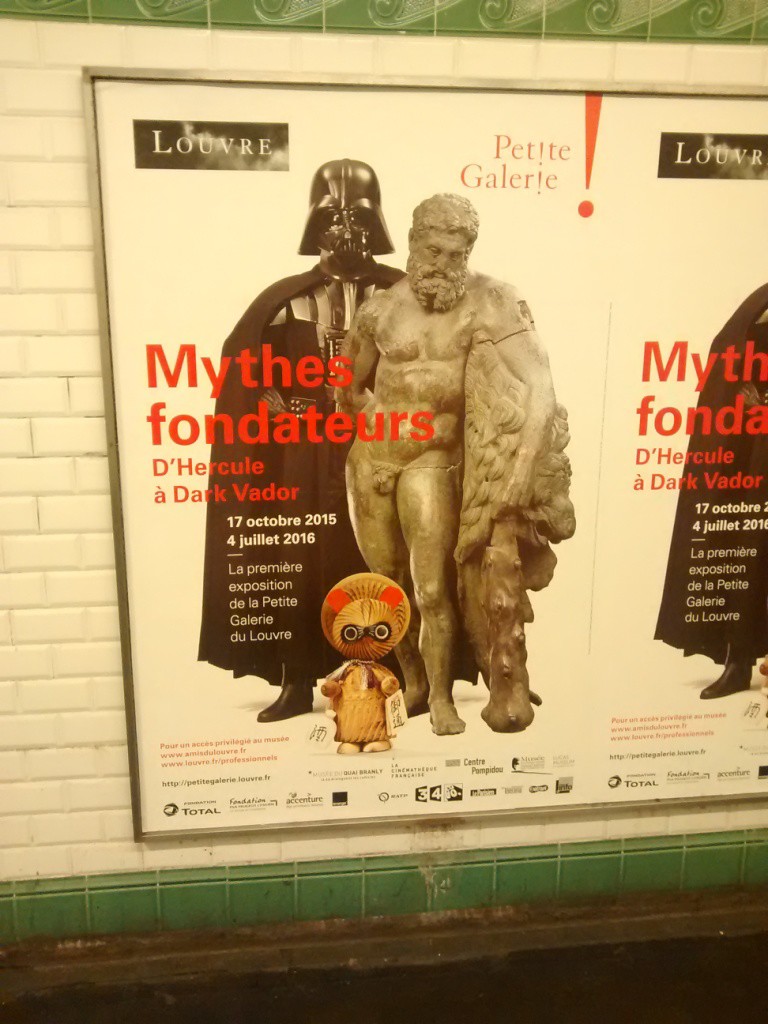 By Will R. Bit of a follow-up to the Paris poster…  Seeing him referred to as “Dark Vador” interested me, as I figured it must be a well-known thing in order to appear on a poster that way. Googling around a bit hasn’t clarified it much for me, but it seems partly to have to do with a somewhat spurious etymology by George Lucas himself, who has apparently suggested that “Darth Vader” might have been derived from Dutch words for “Dark Father”:

The real problem here is that it’s Lucas who started the “dark father” interpretation. See the Darth Vader article,

I say somewhat spurious because apparently “Darth Vader” wasn’t always intended to be the character we now know. (From the page above: “…in the earliest scripts for Star Wars, the name ‘Darth Vader’ was given to a human Imperial general.”)

Anyhow, I couldn’t quickly find out how far back this goes in France, but it seems to be a fairly established thing. (E.g., Dark Vador) It’s strange partly because “dark” doesn’t mean “dark” in French, so I’m not sure what you gain by the change. (Maybe “darth” sounds like something else?) “Vador” I can see, as it’s more phonetic. C3PO’s name was apparently clumsy to pronounce in French and thus altered as well.

Then I assumed this must also happen in other languages (kind of the way dogs’ barks sound different depending on where the dogs live – “How Dogs Bark In Different Languages”). And indeed, I found one reference to him being called “Lord Fener” in Italy: “Why is Darth Vader called Lord Fener in Italy”.

My guess is this is covered extensively somewhere, but if not, perhaps it would be an interesting topic. Was this done from the beginning? Were other adjustments made around the world? Would “Lord Fener” have terrified me the same way Vader did when I was seven?