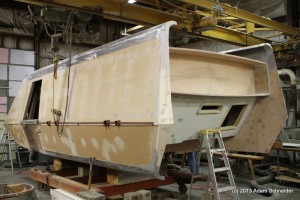 After Adam Schneider and Alec Peters paid $70,000 for the decaying remains of Star Trek’s Shuttlecraft Galileo they wasted no time getting the relic into the hands of restoration specialists. Ironically, moving the 24-foot-long set piece to Master Shipwrights’ New Jersey worksite nearly put an end to it.

The Galileo arrived at the firm’s Monmouth County, New Jersey facility in time to face destruction by Hurricane Sandy. Master Shipwrights was flooded with two feet of water. “Fortunately, Galileo was up on a trailer and was unaffected!” writes Alec Peters. “How terrible would it have been to make it through 45 years of travel and neglect to suffer a dismal fate in a hurricane?”

The restoration firm, selected for its expertise in working on wooden craft, will finish the job in a few weeks. After its refurbishment is completed, Galileo will be placed in a yet-to-be-named public space, preferably an aviation museum.

The duo have been able to afford this labor of love because Adam Schneider, a collector of Star Trek screen-used ship filming miniatures, is a Principal at Deloitte, while Alec Peters is the founder of Propworx, which has handled studio prop and costume auctions for Battlestar Galactica, Stargate, Iron Man and Iron Man 2, as well as the official CBS licensed Star Trek auction.