NASA will celebrate the 40th anniversary of the launch of Skylab, America’s first space station, on May 14.

Skylab hosted a trio of three-man crews — Kelly Freas designed the patch worn by the first, launched in May 1973. Once the third crew was ferried home in 1974, Skylab was abandoned.

Hopes that the forthcoming space shuttle would allow the facility to be reactivated were dashed because in there was no way to boost it into a higher orbit and keep it in space until the shuttle program got going.

Ironically, Skylab’s demise seems better remembered than any work that was ever done aboard.

Broadcast reports about its deteriorating orbit predicted likely places it might crash to Earth, representing another unrealized dream, and one more manmade problem for 1970s America to worry about — and therefore deserving of a certain bitter humor. 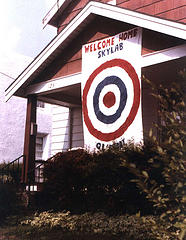 In the state of Washington a “Skylab Self-Defense Society” designated Spokane as the “Official U.S. Government Skylab Target.” The society painted a huge red-and-white bull’s-eye target behind its tiny rented office, and sold bull’s-eye T-shirts.

And a fan started his own “Save My Ass!” campaign, publishing flyers that asked people to donate so he could move out of Canada where the giant junk was predicted to hit.

Skylab ultimately re-entered the atmosphere above the southern Indian Ocean in 1979, with pieces landing inland along the south coast of Western Australia.

Several large pieces of Skylab survived, scattered in the Australian outback. Among the largest pieces were the oxygen tanks. One is featured to this day in a tiny museum along the waterfront in Esperance, a port town 450 miles from Perth. Another of the oxygen tanks was sent to the U.S. Space & Rocket Center in Huntsville and is on display there.

[Thanks to Chronicles of the Dawn Patrol.]

1 thought on “Skylab’s Rise and Fall”