(1) Attendees at the Kendal Calling festival in Cumbria, UK, set the record for the largest gathering of people dressed as Superman, according to the BBC. Although the headline reads “Superman World Record Set: 867 Wear Man Of Steel Costumes At Same Time” it should be — “333 Costumes Stolen Under Superman’s Nose.”

The costumers actually handed out 1,200 Superman suits in all shapes and sizes, but only 867 people showed up for the final count, WorldRecordAcademy.com reported.

David Klaus makes a more charitable assumption about no-shows. “Those mentioned in the story who couldn’t find a telephone booth in which to change undoubtedly forgot that there is still a traditional police telephone box at the Earls Grove tube station (also suitable for traditional Doctor Who fan photos as well, of course).”

The UK gathering smashed a record of 556 people in Superman costumes set at Sears Headquarters in Chicago just a few weeks ago.

A great white shark is tortured and killed by a fisherman, then returns from the dead, exacting vengeance on all humans.

Hawaii’s was rediscovered after it was stored in a cabinet in the executive chambers of the state capitol building. Minnesota’s moon rocks had been put away with military artifacts before being found and transferred to the state’s historical society last year. Nebraska’s display was lost in the governor’s mansion until building renovations resulted in the moon rocks resurfacing.

And then there was the case of Alaska’s Apollo 11 lunar sample display, which disappeared in 1973 after a fire tore though the museum where they were on exhibit. In 2010, they re-emerged in the possession of a reality TV star, who tried to sue the state to gain legal title to the moon rocks. He ultimately surrendered them.

(4) “Who won Comic-Con?” asks Comicbook.com. Out of seven contenders for the title, the editors ultimately crowned a practically unheard-of Marvel Studios production as the winner —

(5) The Famous Monsters of Filmland booth ranked #10 on JoBlo’s list of coolest booths at Comic-Con.

The site has a vast amount of Comic-Con coverage

(6) And Famous Monsters of Filmland founder Jim Warren recently gave an interview to Philly.com. He remembered when Forry Ackerman first showed him a French monster mag —

“I thought this could work in America if done right,” Warren said. Warren borrowed $2,000 to publish what became Famous Monsters of Filmland and even posed on the cover of the first issue in a Frankenstein mask because he could not afford more than one model. Famous Monsters sold out in three weeks and soon began inspiring young readers such as Roy Thomas, a former editor-in-chief at Marvel Comics.

“We found out we weren’t alone. There were other people out there that cared about monster movies,” said Thomas, 72, who wrote series that included the X-Men. “It made us all want to go out and be filmmakers and write monster comics.”

(7) Can this be the end for Bazooka Joe? James H. Burns says it might be so in “Bazooka Joe Bites the Dust, Almost” for the Long Island Press:

Sixty years ago Bazooka Joe—the iconic character created by a Long Islander—debuted in a little strip wrapped around pieces of Bazooka Bubble Gum. Last November, Bazooka Candy Brands—a division of Topps (the company behind so many sports and other trading cards)—announced that they would no longer include Bazooka Joe inserts with their bubblegum, citing decreasing sales. 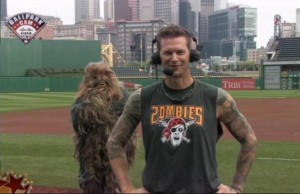 (9) Anne Serling, author of a recently published book about her father, Rod Serling, creator of Twilight Zone, is interviewed by The Twilight Zone Podcast.

(10) Cockeys vs. Zombies got a favorable review in the NY Times:

There’s not much difference between regular English soccer fans and the undead variety in “Cockneys vs. Zombies”: Even when expired, they’re still ready to rumble with anyone wearing the colors of a rival team.

And that’s pretty much the point of this spirit-of-the-Blitz comedy from Matthias Hoene. Filled with East End grit and “EastEnders” escapees, the ragtag story is merely an excuse to remind us, all too emphatically, that Londoners won’t lie down. So when a zombie horde is loosed from a 17th-century vault by two startled construction workers, its chomping progress is less terrifying to residents than galvanizing.

It is a putrid idea. In the good sense of the word. However, my curiosity was fully satisfied by the trailer…

(11) Comic-Con’s Hall H was in a frenzy after the surprise X-Men: Days of Future Past cast unveiling with actors from both the first X-Men trilogy and First Class prequel. Two Professor Xs, two Magnetos.. On stage were —

[Thanks for these links goes out to John King Tarpinian, Andrew Porter, James Burns and David Klaus.]