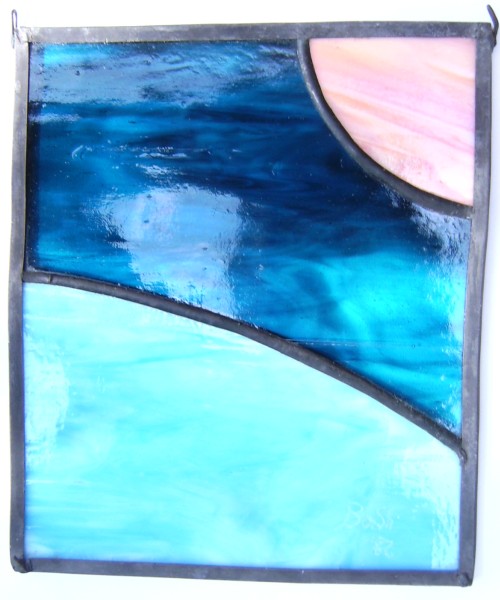 (1) Bob Shaw, the creator of science fiction’s “slow glass”, applied his imagination to real glass as well. Several of his pieces will be up for auction at Loncon 3, Dave Langford has announced.

The late great Bob Shaw, author and fan extraordinaire and a friend of TAFF, took up stained glass as a hobby in the early 1980s. For his own home he created a large panel showing a future city, which I hope is in good hands somewhere. At Novacon in 1982 (I think it was) he exhibited several small panels in the art show, three of which are to be auctioned for TAFF and GUFF at Loncon 3 and perhaps Shamrokon. Here they are.

My modest camera skills don’t do justice to these. The sky/space in the two Twin Planets panels is a deep transparent blue, with the planets nearly opaque and showing swirls and veining that doesn’t photograph well. All the glass in Out of the Vortex is semi-opaque.

(2) Palm trees have been part of the Southern California’s appeal ever since railroad and land developers began advertising for people to move there. Victoria Dailey tells the story in her article of the LA Review of Books “Piety and Perversity: The Palms of Los Angeles”.

Another writer, Charles Nordhoff, also influenced thousands of readers to head west when he published California for Health, Pleasure and Residence in 1872. Both Truman and Nordhoff were enlisted by the railroads to write promotional copy, and more than any single writer, it was the railroad companies that were the mightiest proponents of travel and settlement; they touted Southern California incessantly, selling not only rail tickets but real estate, selling home sites along their right-of-way all the while issuing thousands of brochures that championed the region’s many attractions. What is now the southern section of Glendale was originally the little town of Tropico, laid out in 1887 and named after the local Southern Pacific Railroad depot; it is no surprise that the railroad would name a station and a town “Tropico,” following the lead set by Truman and capitalizing on the reverie induced by the words “semi-tropical.” (The tropical dream never abated: the city of Hawaiian Gardens was founded in the 1920s as was the Cocoanut Grove, the celebrated nightclub at the Ambassador Hotel. In the 1950s and ’60s, newly built apartment buildings took such names as the Catalina Tropics, Glenlani Tiki, and Royal Palms.) Desert dreams conflated with the tropical longings, and palms were the proof.

But I’m fond of pointing out the 70 varieties of eucalyptus, imported from Australia, that have taken over the town since the 19th century. Neither the friars nor the Native Americans of the mission era ever saw any of these.

(3) Although much has been made of Queen Elizabeth’s tour of the Game of Thrones set, the comics’ Queen Victoria seems to be more in tune with the books. George R.R. Martin makes a cameo appearance while Vicky’s trying to remember which of the stock characters she just killed off in The New Adventures of Queen Victoria comic strip.

(4) “In space, can anyone hear your bagpipes?” asks James H. Burns. The reason for his question is that Scotland dominates the list of possible locations for a UK spaceport.  He adds, “In what will no doubt be music to the ears of Sean Connery — and the many other Scottish nationals who have strived to help their bonny homeland — this could be a real boon to Scotland’s economy.”

(5) Terraform the Moon? Gregory Benford tells Slate how he would do it:

With the right approach and some luck, it might make a decent place to live, so long as you enjoy Florida’s weather.

Terraforming our moon will take many decades and vast abilities. Before we can begin, we’ll have to master the resources of our solar system—especially transporting raw masses over interplanetary distances. That means nuclear thermal rockets (which we already developed by the 1970s), advanced robotics and communications, biotech, and sustainable closed environments. Once those come, we can reach higher.

(6) I’m a sucker for headlines like: ”Scientists in Africa discover 548-million-year-old structures. Who built them?”

During the Ediacaran Period, which lasted from about 635 million to 542 million years ago, all life lived in the sea, and most creatures were immobile and soft-bodied, with mysterious wavy, frondlike shapes.

But in the 1970s, scientists discovered evidence of Cloudina, the earliest fossil animals to have skeletons. The pencil-shaped sea creature could grow to about 5.9 inches (15 centimeters) long. A cross-section of the tubular shape shows that it would’ve been about 0.3 inches (8 millimeters) in diameter, Wood said.

“It’s like a series of hollow ice-cream cones all stacked up,” Wood told Live Science, referring to the appearance of the Cloudina skeleton. “It might have been related to corals and anemones and jellyfish.”

(7) I also can’t resist reading about mysterious places inside the New York subway that the public hasn’t seen for 90 years. Such as “Behind Subway’s Phantom Hotel Entrance, Neither Arias Nor Opulence”.

Even in its day, the subway entrance was not for everyone.

For instance, after escaping from a nearby theater, an 11-year-old chimpanzee named Prince Charles strolled into the hotel lobby on Feb. 17, 1918. Despite the fact that he was fully dressed, the police were summoned.

(8) A latter-day ape is getting good reviews, too. Grantland’s hard-to-please film critic Wesley Morris says don’t miss Dawn of the Planet of the Apes:

Waiting for Caesar to restore order, I experienced an impatience that I haven’t felt since the first Superman movie: Hurry up and save the world. This is a fake monkey, but the urge to let him protect us feels intensely real.

(9) Disaster struck in 2003 on the day Bradbury biographer Sam Weller was scheduled to visit the author — the space shuttle Columbia burned up during reentry.

When I arrived at Ray Bradbury’s house 30 minutes later, I found Ray waiting for me. He was seated in his big oversized leather chair. The television was on and he was watching the news reports on the shuttle disaster.

He had had tears in his eyes.

“Kaleidoscope” was first published in Thrilling Wonder Stories in 1949.

Plot Synopsis: A rocket crew experiences a catastrophic explosion onboard their ship, finding themselves cast out into space, going off in separate directions, yet still able to communicate to one another over helmet radios as they each come to terms with their inevitable fates.

(10) Here’s the place to see Soviet Animations of Ray Bradbury Stories: ‘Here There Be Tygers’ & ‘There Will Comes Soft Rain’.

Sergei Bondarchuk directed an 8-hour film adaptation of War and Peace (1966-67), which ended up winning an Oscar for Best Foreign Picture. When he was in Los Angeles as a guest of honor at a party, Hollywood royalty like John Wayne, John Ford, Billy Wilder lined up to meet the Russian filmmaker. But the only person that Bondarchuk was truly excited to meet was Ray Bradbury. Bondarchuk introduced the author to the crowd of bemused A-listers as “your greatest genius, your greatest writer!”

(11) The Soviet director obviously needed a higher rating than A-list for Ray but he would not have found it on Larry Correia’s new ”Official Alphabetical List of Author Success” — a taxonomy that exists largely to prove it’s a long way down to the bottom of the barrel where his antagonist, the Guardian’s Damien Walter, supposedly resides.

I’ve often been derisively referred to as a “D List Author” by my critics.  Curious, I had to look up where that list came from: http://en.wikipedia.org/wiki/A-list

Sadly, as usual my critics suck at everything. This scale is based on how recognizable movie stars are, and since most regular people wouldn’t recognize any but the most famous (or funny looking) authors, it doesn’t really work for us at all. So I have created this super helpful guide so critics know what bucket to arbitrarily stick writers in.

(12) Artist and writer Alan White will see to it that you’ll get your money’s worth if you help subsidize his trip to Burning Man.

If thou art of generous frame, or in need of a good chuckle, perhaps you’ll visit my IndieGoGo page where I defenestrate myself to coax the unwary populace to throw their money away so I can go mad in the desert!

So get your wallets out, go here and throw your money away as if you’ve had a meltdown!

Here’s a sample excerpt from White’s diary: a passage about increasing his physical fitness for the quest.

Fortunately I found a gym catering to the average Joe and not those hulking, god-like Adonises: intimidating to a weak-willed flabatetic such as myself. Thankfully, however, there are Goddesses that inhabit this same space-time continuum, with their ponytails and perfect asses, galloping on treadmills and assaulting Stairmasters for hours on end without breaking a sweat; an impossible feat for me, much like the women themselves; the stuff of daydreams, never to be attained.

I’m convinced days of rejuvenating past “coolness” is far behind and must be content to make the best of what time is left. “Get real you old, gray, fatty, those gals wouldn’t give you the time of day”. There was a time, to be sure; but that ship has not only sailed, it’s been torpedoed, and now rests teetering over the continental shelf of my psyche.

Why is modern Science Fiction so bad? Why are modern comic books so bad?

Why is modern art so very, very, very bad? One would almost think these things are being made bad on purpose.

And one would be right!

But the answer to the simple question of why SF sucks is a complex answer, leading all the way from the zenith of the universe to the nadir, all the long road from heaven to hell.

Even a cursory inspection of modern art shows that beauty, which is the particular province and goal of the arts, is not merely avoided by modern artists, but despised. They are not producing poorly executed works of repugnant nonsense and blasphemous lumpish, retarded, asymmetrical obscenity by mistake or through indifference. The diametric opposite of beauty, namely, the revolting, the ugly, the aberrant, whatever is foul and vile, whatever causes a visceral sense of disorientation and disgust, that and precisely that is the goal of the Modern.

(14) An espresso machine for the International Space Station? James H. Burns wonders, “Is it really a good idea to have a high-pressurized device — one that’s AVOIDABLE — in space?”

Well, James, when you consider that they’re “up all night” 15 times a day, I’d say it’s indispensible!

3 thoughts on “Snapshots 139 Glass With Class”