I don’t really believe the public is clamoring for an U.N.C.L.E. movie, much less one starring Henry Cavill and Armie Hammer. But Variety says that’s what we’re getting.

Yes, count on Armie Hammer to bring to the role of Ilya Kuryakin everything we liked about his Lone Ranger. Surely there must have been something. The script calls for Cavill’s Napoleon Solo to be initially hostile toward Hammer’s character. Now there’s something nobody will have any trouble believing. And count on the critics to take up where he leaves off.

But who will be agency chief Alexander Waverly? Robert Vaughn, who played Solo on TV, says he hasn’t been contacted about the part. Many fans would like to see Vaughn in character finishing his U.N.C.L.E. career as Waverly’s successor. (Leo G. Carroll, who originated Waverly, died in 1972.) 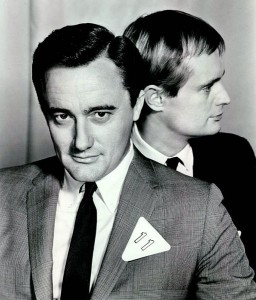 It’s been a long time since U.N.C.L.E was on any screen, big or small. Vaughn and David McCallum reprised their roles in 1983 for CBS’ TV movie The Return of the Man From U.N.C.L.E. And a few years later, when the A-Team was on its last legs, Robert Vaughn came aboard to play General Hunt Stockwell, the federal spymaster who picked their assignments. The role was an overt reference to his old series, and his debut episode “The Say U.N.C.L.E. Affair” also cast David McCallum as a Russian (“Ivan Trigorin”). Of course, it would be a struggle to believe McCallum doing a Russian accent these days, after watching him so long as the idiocyncratic Scottish medical examiner on NCIS.

David Klaus says his dream cast for an U.N.C.L.E. movie is George Clooney as Napoleon Solo, Orlando Bloom as Illya Kuryakin, and Patrick Stewart as Alexander Waverly (Ian McKellen would also suit him as Number 1, Section 1.)

10 thoughts on “Solo Gets Encore”