aka Don’t ask for whom the puppy barks, it barks for thee.

There’s a fun irony in the fallout from the Sad Puppies/Rabid Puppies Hugo thing.

There are now over 8,000 members of Sasquan (WorldCon). The con gained over 2,600 supporting memberships since March 31st of this year and about 350 attending memberships. I think it can be safely assumed that several of the 1,948 people who bought supporting memberships before March 31st were slate voters and GamerGators. Not a majority, perhaps, but a sizable chunk. And some of the post-March 31st folks might be puppy supporters. However, I’m fairly sure that an overwhelming majority of these new members are anti-slate or anti-puppy.

That’s thousands of people who don’t think that diversity is a dirty word, who don’t consider the larger number of women and authors of color on previous year’s ballots to be affirmative action or diversity for the sake of diversity or political correctness gone wrong.

That’s thousands of people eligible to nominate for next year’s Hugos, and with a big incentive to do so.

If we see 3000 or 4000 or even as many as 6000 (or more) Hugo votes and no sad-rabids win, then that will have to be seen as a very aggressive smackdown not only of the slate nominees, but also of the thinking behind the slates.

Seeing as how people on both sides are now saying, “Read the nominees, vote your conscience,” if such a smackdown occurs — even to the point of a couple “No Award” categories — then what?

(The day after the ceremony, it’s traditional for the committee to release the vote tallies. It will make for some very interesting reading and there will likely be a great deal of discussion and analysis.)

There are several possibilities:

1) The sad-rabids could acknowledge that people voted their consciences and the best works won. Because some of them have claimed they are for diversity and inclusion (insert eye-roll here) they might then pat themselves on the back for at least getting some of their candidates on the ballot and promise to come back next year.

2) Also possible, the sad-rabids could double down and claim that the voting was somehow unfair and that the secret cabal of leftist Social Justice Warriors had gamed the vote. (Insert another eye-roll here. Anyone who’s ever tried to organize fans knows that herding cats is easier. With cats, you only need an open can of tuna. With fans, you need pizza, beer, and a sneak preview of the next SF blockbuster, and the results still aren’t guaranteed.)

….If we have 3000 or more fans nominating for the 2016 awards, then it means that anyone trying to run a slate and game the nominations is going to have a much harder task.

So the unintended consequence of the sad-rabid exercise will have been to put more money in the Worldcon treasury and energize fandom to be more engaged in nominating and voting for Hugos. This is a good thing. (The analogy of white blood cells rushing in to fight an infected wound might be appropriate.)

I personally don’t think the No Award option is nuclear enough. I would kinda like a refund on the purchase price of the books, and I would certainly like to prevent people in the future from being hoodwinked into purchasing any of these novellas by reading the endorsement implied by seeing “Nominated for a 2015 Hugo Award” on the cover. I would like these novellas to have never been nominated, and I believe that could be done. I almost would like for these novellas to have never been written, but I am afraid that is not possible.

Because Worldcon owns the Hugo trademark intellectual property they can manipulate it in order to maintain its value. They have done this incrementally in the past by adjusting the rule-set needed to be nominated for, or win, a Hugo. They can do it again by removing nominees that loose to “No Award” from the list. This would prevent unscrupulous publishers from realizing an increased prestige or profit as a result of stuffing the nominating ballot boxes.

I have no idea how to go about creating such a rule, or even proposing such a rule for that mater, but I do think it would be a good move. It may even be necessary, as the puppy thought police are not the only ones who might gain from a critically injured Hugo award process. The puppies are not the only ones who have the wherewithal to corrupt the nominating process for their own gain, and they are not even the ones who could do it best.

It’s entirely possible to obey all the rules and still take an unfair advantage. It happens all the time in real life, which is why children of rich people get richer and children of poor people generally stay poor. It’s why black people in America are generally confined to slums and low-paying jobs and considered as criminals until proven otherwise.

Maybe so. As I said in my prior post, the Hugos themselves are not really important. I’ve never voted in the Hugos because I have better uses for my money, and also because I haven’t much interest in reading 90% of what gets nominated.

Neither I, nor anybody else, thought the Hugos were so important that it was necessary to devote the time and energy into campaigning for people to spend $40 or more simply to ram through a super-slate of politically acceptable works- until now.

Now that it’s happened, a lot of people are appalled- but the most appalling thing is that it was done with less than 20% of the vote.

Or, to put it another way, over 80% of voters casting Hugo nomination ballots did not vote for a single Sad/Rabid Puppy recommended work or creator.

So the 20% get to rule over the 80%, and in the minds of the Puppies, this is fair… because it’s them doing the ruling.

I’ve decided to read — or try reading — everything on the Hugo ballot this year, and that means there’s more than one novel’s worth of fiction by Wright I have to slog through. There’s a human experiment aspect to all this, as well: it will be interesting to see a) if I can make it at all, b) if I can give a sensible account of the experience and c) if I can do a more-or-less balanced review of this stuff knowing what kind of a person has written it.

I don’t hold any delusions of being completely objective, of course, because there’s no such thing as complete objectivity outside mathematics. Acknowledging Wright’s beliefs probably affects my judgment of his fiction in some way. What the effect will be exactly, remains to be seen.

“Review: On a Spiritual Plain by Lou Antonelli (2015 Hugo Nominated Short Story)” – May 11

On a Spiritual Plain by Lou Antonelli is the second story from this year’s Hugo Awards ballot that I have read. I did not have high expectations of this year’s short story ballot because all nominees were nominated because of their presence on the sad and/or rabid puppy slates. (I did not like a single one of last year’s sad puppy nominees.) Totaled, the first story I read, was not a great story, but at least it had some positive moments. In contrast, On a Spiritual Plain fits right in with last year’s sad puppy nominees.

The story’s protagonist is the chaplain of a small human outpost on an alien planet. This is a bit familiar. One of last year’s sad puppy Hugo nominees by Brad R. Torgerson also featured a chaplain of a small group of humans on an alien planet. Now, this year Brad Torgerson put together the Sad Puppies slate. I guess he has a thing for chaplains in the  military. Hm. I don’t have to understand this, do I?

Based on some of the nominating numbers I’ve seen and taking into account a large section of the sci-fi blogosphere’s determination to nuke the Hugos from space, I have some worry for the smaller categories. From what I understand of how No Award works, if it gets a plurality in a category simply because of people who are voting a straight No Award ticket, it will knock out all of those works in minor categories voted on by folks who were actually approaching each category in earnest and trying to vote out of the five based on individual merit. Hopefully the number of jerkass ideologue who REALLY want to spend $40 just to vote a no award straight temper tantrum ticket and smash the trophies so that no one can have them constitutes such a small fraction of the Hugo voters that they won’t edge out even the most obscure categories.

“Statistics of Gender on the Hugo Writing Nominees: Probabilities and Standard Deviations” – May 11

This will tell us whether a given gender distribution is within what we’d consider an expected year-by-year fluctuation from 50/50, or whether, assuming a 50/50 gender split, it would be…well, an extreme outlier.

Even though the number of ballots are soaring, the % ranges are staying somewhat steady, although we do see year-to-year perturbation. The top nominees have been hovering between 15%-22.5%. Since 2009, every top nominee has managed at least 100 votes. The bottom nominee has been in that 7.5%-10% range, safely above the 5% minimum. Since 2009, those low nominees all managed at least 50 votes, which seems low (to me; you may disagree). Even in our most robust category, 50 readers liking your book can get you into the Hugo—and they don’t even have to like it the most. It could be their 5th favorite book on their ballot. 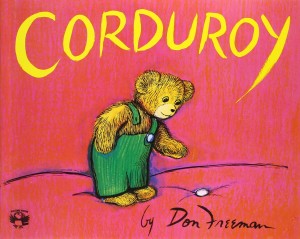 I take it back. This bear isn’t even a delta male. He’s a full-on gamma. His sad little quest ends in a pathetic anticlimax as the night security guard—a proper man—literally puts him back in his place, where he stays until the girl comes for him.

And then the little girl does come back and buys him, and sews a button on him anyway. The Feminazis talk about agency, but where’s his agency in all of this? He never found his button. He never got a chance to be a man. Instead he needed the girl to “fix” him, playing mind games on him all the while.

“I like you just the way you are,” the temptress coos, “but I’m sure you’d be more comfortable if you let me, oh, I don’t know… change everything about you.”

@RichardFPenn I suspect that very few voters for the Sad Puppies slate were literally dogs. Though it's hard to tell on the Internet.

Hush Puppies is for fans of science fiction, fantasy & other geeky pursuits who do not want the drama generated by Sad or Rabid Puppies.