By Daniel P. Dern: At Boskone 55 back in February, I had the pleasure of being on the “Fantasy in Gilbert & Sullivan” panel moderated by Faye Ringel, aong with Ellen Asher, Greer Gilman, and Timothy Liebe, where we discussed, among other things, mystical potions, temporal paradoxen (sic), death curses, etc. 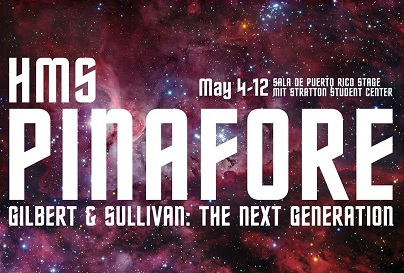 It was well done and great fun.

Many G&S productions that are re-set in different times and climes do various tweaks that don’t always work so well. For example, doing Pirates or Pinafore on NYC’s Coney Island or something like that. Or Mikado as Chicago gangsters, IIRC.

Here, if you were just listening to the sound (but not the sound effects), only one or two sentences and a few words would have given away the updated setting. (E.g., during “When I was a lad,” the Captain remarking, “Doesn’t he know we’re in space?”, and a very few Trek references.)

Equally, if you were watching but didn’t have audio, you would have had no trouble assuming you were watching a fannish ST:TNG production, given that the stage was a reasonable Enterprise bridge mockup, the players in various Federation uniforms, and there was at least one Vulcan and one Klingon (occasionally waving a distinctive Klingon curved double-edged weapon), and one green-skin. (The distinctive choreography for one or two of the songs, in particular, “Nevermind the Why Or Wherefore,” might have been sufficient clue to G&S fans who’ve been to a few performances…)

Josephine (the Captain’s daughter) had a magnificent voice, hitting the high notes trying to choose between the Gods of Love versus Reason), and Buttercup’s singing and mugging came close to stealing the show.

While, like I said, the words were mostly un-Trekked, there was a judicious use of ST sound effects and stage gimmicks, like a gauze-curtain transporter, the use of a fabricator to make on-demand objects (food, a framed picture of Sir Joseph Porter KGB, etc), etc.

We’re usually not out this late on weeknights, but who could resist? (We can’t make it to the final shows this weekend.) And we’re glad we did.

I don’t know if there will be videos posted, but if there are, I recommend them.