Spectrum Fantastic Art Live isn’t going to San Francisco after all. Plans to hold the 2016 event there in October have been set aside.

Arnie Fenner explained why in a post at Muddy Colors.

Anything is possible if the desire is there, but everything comes with a price tag and the subsequent tough decision to back away from plans to hold the show in San Francisco in association with the AAU was not made lightly. Spectrum Fantastic Art Live has always been about benefiting the entire art community—the creators, the patrons, and the fans—and everything with the show has to make sense, including the dates, the costs, and the venue. We had heard from a great many exhibitors and attendees who enjoyed the convenient, casual and friendly atmosphere of Kansas City and were actually disappointed by the move out of the midwest, which pleasantly surprised us.

We’ve always known that doing a convention isn’t just about our bottom line, but about everyone else’s, too, and we pay attention to what’s happening in the marketplace….

As with past shows, sales of originals and prints at SFAL in May 2015 were great for some, good for others, and not so hot for a few—that’s pretty much the way it always is for every convention, big or small.

Last Autumn sales were reportedly very disappointing for exhibitors of Fantasy-themed art at several conventions. Many felt that the poor sales might have been due to a recent Heritage auction which included another portion of Jane and Howard Frank’s immense art collection. Personally, I don’t believe that one really had anything to do with the other.

Speaking bluntly (as is my wont), original art is a luxury item and sales are often tied to the cycle of confidence and stability. The current political climate and tone of the Presidential campaigns (the Brexit hasn’t helped) have had a significantly negative impact on art purchases as people worry about the economy and the future in general. Shoot, even the 1% have cut back on their buying. With a convention there is always the temptation to “keep going full steam” and ignore the lookout’s warning that there’s ice ahead, but rather than bull through and make SFAL happen someplace sometime in 2016 regardless, we opted to take a breather, let the dust settle, and optimistically hope things get back to normal after November.

More news about attendee ticket prices, hotel information and special rates, and activities during the show will be posted as available on the SFAL website  and the SFAL Facebook page. 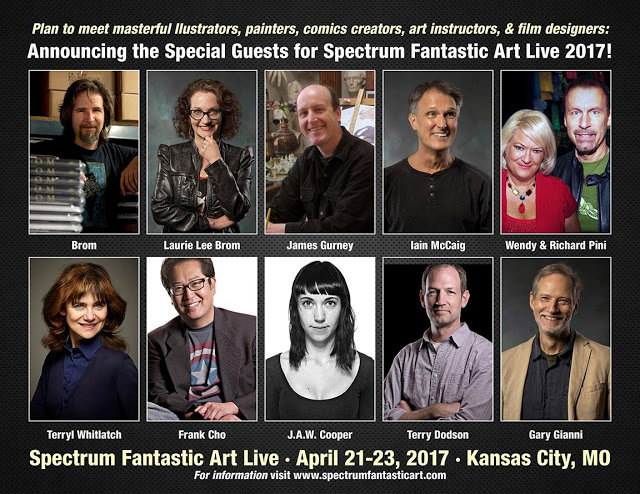