Stan Burns in his longhaired days.

Stan Burns, sometimes called “Staniel,” but never Marsdon Stanford Burns Jr. (though he was), died April 23 at his home in Riverside, CA. He had spent several months in sharply declining health due to pulmonary distress brought on by lung and diaphragm damage sustained in a 2012 auto accident.

Stan discovered science fiction at age 10 because his mother was trying to get him to read more. Asking a librarian for a recommendation, she took home a copy of Heinlein’s Have Space Suit, Will Travel. We can say — that sure worked!

He reached out to fandom and became a LASFS member in 1967 while writing a Cutural Anthropology paper for a course at the University of Southern California. Stan graduated with a BA in Psychology in 1970.

I had been in fandom a year and knew that the writers always gathered in the bar, so I went in. I sat down next to this woman who was softly crying, and asked her what was wrong. It was her first convention and she just had a story published, but no one knew who she was. Of course it was Anne McCaffrey. I was able to truthfully tell her that I had read and liked her Analog story. That stopped the tears. I like to think that I helped her to enjoy the convention but I think winning the Hugo probably helped too . . .

Besides reading, Stan’s other passion was photography. He became the official photographer at Equicon, Filmcon, LACon I and III, many Loscons. His photos of Star Trek personalities were published in David Gerrold’s The World of Star Trek (1973). For much of his life, he made his living repairing cameras. 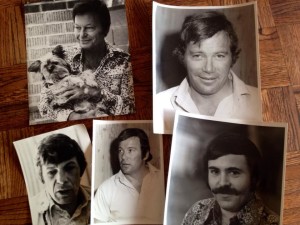 I joined LASFS three years after Stan. Our shared sercon interests gave us a lot to talk about and we became good friends. He wrote many book reviews for my early fanzines Prehensile and Scientifriction. And Stan’s satire “Ten Million Clichés From Earth” was a real masterpiece. I published it in Scientifriction in May 1975. At the time I was enrolled in Theodore Sturgeon’s writing class at UCLA. I presented a copy to Sturgeon who enjoyed Stan’s humor thoroughly and read passages aloud to his students. 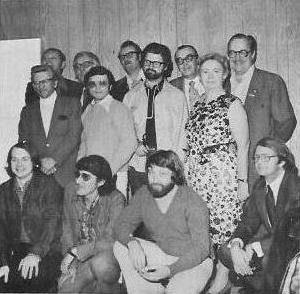 As the years passed, Stan felt he got less and less out of science fiction fandom, although he was still around at parties and conventions. He transferred his primary allegiance to mystery fandom, which seemed to reciprocate his love for the literature in a way sf fandom never had. He attended Bouchercons, produced a fanzine called Who Donut?, and was a loyal member of Dapa-Em, the mystery apa. 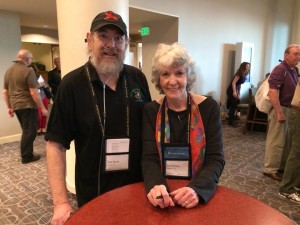 Stan Burns with Sue Grafton at Bouchercon in 2014.

However, as I was researching this obituary I found to my surprise that Stan had resumed doing reviews of science fiction books late in life – for example, a 2011 post about Connie Willis’ All Clear.

He was also busy digitizing his slide collection. His last posts to Facebook were favorite photos he’d taken of flowers.

When Stan’s sister-in-law announced to his Facebook friends that he had passed away, she said Stan had generously arranged to have his body donated to UC Irvine School of Medicine and, later, his ashes will be cast upon the ocean.